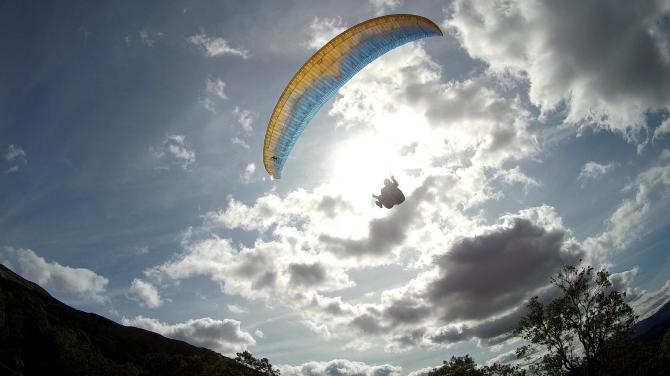 After a dreadful August, the second weekend of September offered some respite with a promise of lovely Autumn weather.

Midday found us laying out on the east end of Wolf Crag - the sky looked superb, the wind on the hill and gliders were thermalling nicely over the crags 1k away.  Soon we were in amongst it and the thermals were indeed - good, nice mellow autumnal thermals, very easy to work. After the first 20 minutes a lull in the cycle put many below the cliffs and a few into the bottom landing - the meteo wind was light and working thermals was the order of the day.

With the advantage of extra height I found a thermal that would eventually take Geoff and I to base with a few others coming in below.  It was still relatively early, but the sky looked good and base touching 4200'asl at this stage. Geoff set off first whilst I siddled across to a blue Ozone wing that was approaching base 200m away. Hitting base blue Ozone headed back upwind leaving me to carry on into and out of the clouds with no traffic to worry about. It was spectacular stuff.

We set off on a glide, Geoff ahead and by this stage a little lower. Given the wind appeared a little NNE we opted for the east side of the Helvellyn spine. A second rough, but short lived climb near St Sunday Crag provided a top up and then it was the long, slow glide towards Caudale Head. From this point the good climbs disappeared and the mostly blue sky offered little to go for. Caudale was also a glide too far and this got changed to the long spine of Middle Dodd leading into the top bowl of Red Screes. In retrospect Caudale may have been the better option, but at the time we appeared to be entering it too low.  I think it would have worked OK.

Working the face and crags into the Red Screes bowl was fun - slow, but fun. Overhead summit walkers looked down, then level and for a while we got a few hundred feet above them.  Given a lively sky we should have been OK to take a good climb out of here, but the sky looked distinctly poor with the only clouds out of reach to the east or a long way down wind.  Eventually, Geoff's patience gave out and he set off, no climb, not a lot of height but I guess with some hope.  Five minutes later I followed with the same dysmal outlook.

Sink and more sink ...the height winding off rapidly. Some way ahead I saw Geoff start to circle and slowly climb along the slopes of Wansfell. Lots of bar and straining to get there but being too low and skirting bushes and crags it was too late, too low. I headed on and out, landing in a nice field. Geoff's climb turned out to be a bit if a useless appology for a thermal amd 10 minutes alter he joined me in the same field (to be sociable).

Assessing the day afterward, maybe we left too early as later pilots did better .... or perhaps we were in the wrong place and out of the main convergence (?) zones.

A nice bus ride to Keswick and Stevie Giles very kindly came out and drove us back to the car. Thanks Steve ... very appreciated.

A nice looking day, big plans, but a total waste of effort.

The forecast, indeed every forecast said SW winds ... in fact it was more NW and very light. We walked a fair way up, laid out and waited whilst the sky filled in and any weak thermal cycles died away.

On the drive back we noted swarms of gliders over Tailbridge ... it looked SW there.

A bit of a bummer of a day - best forgotten. 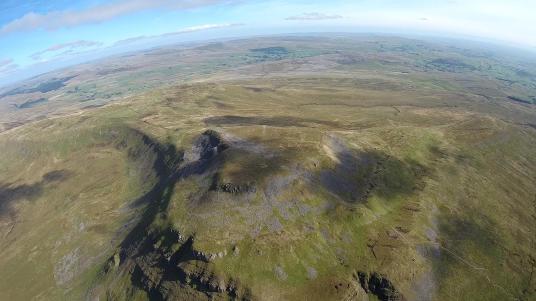 A glorious September day during a week of lovely late summer weather.

Geoff, Tim, John H and I found it a tadge breezy - but OK. I took off first about halfway up the hill and headed towards Ingleborough where several others seem to be doing OK and very high. Eventually Geoff, Chris Kay and I found ourselves in front of the main face and about 1000' over the summit - but that was the limit of what the day held - after that the day weakened and we headed back to the main bowl as the wind had backed towards the west, not ideal.

A lot of trying to get back toward the main west face of Ingleborough but it wasn't having it. Geoff weakened first and headed back north towards the cars, a while later, Chris also headed out to land. I hung in for another 20 minutes and with my lift  probably gone I thought I'd get as far south as possible and walk out to the main road for a lift into the village.

I didn't get far and had a 45 minute walk for my trouble,  but a lovely night trogging along the scars.

Another great looking day. Geoff, John H and I started off for Hawes, checking the wind at various places and always finding it top end. So ... as we always do, we headed for the cafe, Penny Garth in Hawes, and chatted away time over several cuppa's, some pies and Geoff's giant bowl of chips.

An hour or more later we set off up to the roadhead at Wether - it was just about OK, but with Dodd the better option continued on. The carpark was deserted, but it seemed like it might be OK. At take off it was nearly possible, but occasional strong gusts caused us to stand down for about 45 minutes - after that it appeared to have eased and smoothed out to very acceptable.

We managed about an hour in mostly light thermals ... as steadily the wind  veered more northerly, leaving us with Grove Head. A few others appeared and whilst they were able to fly probably missed the better part of the afternoon.