I hadn't planned to go flying, but as I looked up from a welding job it didn't look too bad. That of course is relative ... in terms of not raining or blowing a gale. For sure it was an improvement on the preceding twenty days of March.

With a new wing to try, I headed over towards Hawes. The wind was light at home, but once over Newby Head it started to make itself felt - a pity because a few patches of sun cheered me up. By the time I reached Hawes the chimney smoke was too horizontal to even bother driving up to Wether., so I turned tail and decided on Brantside.

Brantside has grown in my estimation over the last few years. I've had some good xc flights from there and three triangles,  it's proved a reliable thermal generator, but it also has other merits. The wind always seems much lighter than Wether or even Dodd and it's almost always on the hill at take off. (HINT: At the roadhead carpark it's often windier and across the hill, so don't be put off. As the hill turns , the wind seem to split from Dentdale and flow up adjacent valleys leaving the hill rather becalmed.).

Take off was as nice as it could be, a smooth breeze and square to the slope, so ... no messing about just layout, into the harness and away.  The lift was plentiful and very smooth but the low base limited heights gain to about 300'. I established a pattern of entering the murk and then pushing out to the railway line. The first time I came to push speedbar - a bit painful! I'd pulled an upper right leg muscle  during a gardening incident  five days earlier and it made itself felt. Must try to avoid gardening! From that point on it was mosty left leg speedbar - which felt a bit weird. Cracking glide into wind on the B2 - seems better than the Sigma 10.

I enjoyed a nice solitary float about, got a bit of a feel for the new wing and as the base started dropping and squeezing me I headed back to the car quite satisfied. 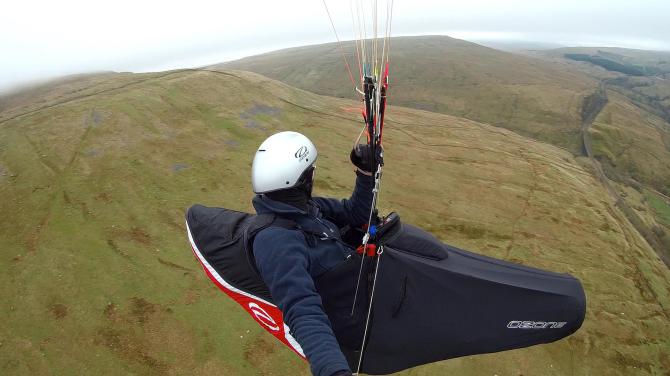 A midday appointment meant I never arrived on site until 2.30pm. The sky was so full of gliders I stopped counting at 30!  From Hawes it looked like the first midges of the season had arrived overhead.

Flying-wise it was one of those easy days, very smooth - the odd decent thermal and a good day to get reacquainted with the glider - in my case, trying out the Bonanza 2. Despite promises of a Rasp 5 it was far from that, but the airmass was good (if chilly) and it was a good glider testing day. Also flew my GTO 2 for comparison .... the B2 is very similar in performance although a kg heavier - feels v solid.

I had several flights, all very enjoyable, before heading back to land by the car at the roadhead.

A few video stills at LINK 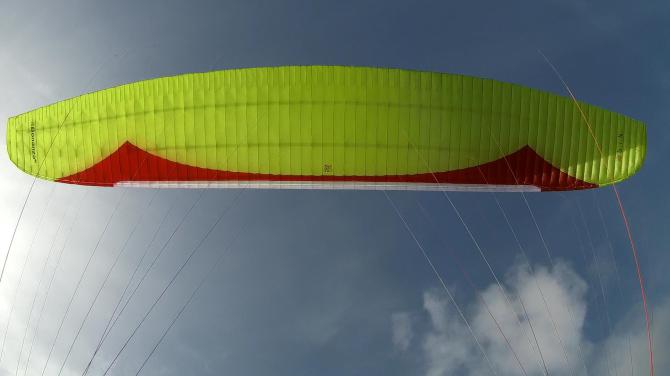 From a few days out RASP had been quite pessimistic, to me it looked a potentially 5 star day in the Dales .... but less so in the VoY. In the morning Rasp still didn't do it justice (in my opinion) ... the airmass looked superb, the base looked higher, more like  5500' and the wind dropped out after 1pm, so I thought it looked excellent. Being a workday meant less were out, but it never seems to stop keen pilots ... yet everyone was quiet (all Whatsapp groups I'm in said zilch!) - no mention of any action or enthusiasm for the day. In the end I went on my own to Wether Fell with the plan being a straightforward goal flight to Harrogate (52k) Not long ... but it looked like once out of the Dales the conditions would deteriorate, so I played safe. It's also the case that us OAP's need a train station to aim for

I arrived at Wether to find - no one. Being still early and thinking 1pm was the time it would get going, I checked out Dodd too - still no sign of pilots. Arriving back at Wether, Martin Bunford turned  up so at least a chat in the sun whilst waiting.

Come 1pm the cu's started, but the wind dropped to virtually flat calm although with indication of the cycles starting. Ten minutes later I took off in little wind and not quite knowing what to expect but the sky looked fairly tasty.  It took less that half a beat and I was climbing out ... never expected that to be so easy.  There was little drift, which was fortunate as my start cylinder was still untagged and now a good 1k upwind. Determined to tag it, I set off back in good air, clipped it and was soon climbing away  with a good sky downwind - and the first of many moor fires.

Generally an easy flight, so not much to say. The plentiful moor fires were the perfect markers for providing ground wind speed and direction, and the plumes were pulling into the fairly obvious clouds. It felt a slow flight, little wind at height and little thermal drift ... so just climb and push on mostly staying high. Base was about 5500' but I pulled to the side just under.  I was following one of the classic 'hot lines' out of the Dales and it set up textbook.

The crux came towards the end. The last of the clouds over the moors ended and then it was into the blue after a last weak climb.  I have my current glide and glide to goal next to each other so it was a constant effort to try to bring the current inside the latter. it was tight!  At 12k out it seemed touch and go and with a broad, wooded valley near goal I just hoped I'd had the sense to put the edge just this side.  In the end I slide in with about 150' to spare and into the perfect field without a breath of wind and a warm sun.  Overhead there was barely a cloud to be seen so any further was very unlikely.

A nice ending to a lovely early Spring flight. Good when a plan comes together. 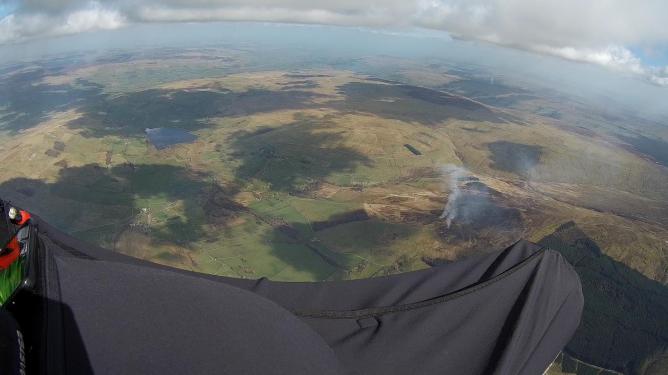 A very pleasant few hours on Wether Fell with about eight  others. The morning had been clagged in above 1500', but eventually it lifted and the sun came out. Easy conditions for whatever you wished to do ... except xc.

Mike Cavanagh. Steve Etherington and I drove north to the Devil's Beeftub with great plans for a big triangle,  boosted by the promise of  RASP 4/5. Wherever the forecast great sky was - it certainly wasn't here. (It later transpired it was about 80 miles further north into the Highlands).

The sky was uniformly flat and grey and the odd hopeful patches of sun were fleeting. For a while we sat and waited in a very light and fickle wind. A few Wing Beaters turned up and joined the parawait. Whilst the thermal propects didn't improve the wind became enough to soar. Going down here is not for the faint -hearted ... the slopes are really too steep to land on and the walk up from the bottom long, tortuous and heart-wrenching.

So we got to fly ... lots of scratchy soaring flights and top landings until we decided it was pub time and made our way down to the Star in Moffat for excellent beer.