A brief late afternoon/evening window of good weather - nice sky, but too windy until 4pm.

Brigsteer remains an acquired taste,  except for the converted. Quite how and why it works so well late in the day I'm not sure - but it does and on a regular basis. It's quite common to float around at a few thousand over take off as gradually the wind dies away after around 7pm and the shadows lengthen across the far side of the valley.  For a site just a few hundred, shallow feet high it packs a lot of quality punch.

Around half a dozen of us  convened at about 4.30 and soon took to the air. Take off is still (after 33 years) the most unpredictable part of the flight. You get what you're given - anything from the easiest, smoothest, floatiest climb out towards the trees ... or a rodeo-ride down the field towards the trees, followed by a battle just above them until you're finally up - or not!

We could climb out in late thermals to around 3000' and wander over the full length of the ridge and then some. Towards the end I drifted back to Natland with decent height and even some clouds. I was tempted. At any other time it would have been a goer but a glance at the time said no one starts an xc at 6.30pm - so I headed back. However, my bridges were burned so I didn't quite make it by a couple of fields. Still - only a short walk.

Back at the car the hill seemed deserted - pub then? Which pub?  I discovered later that my super shit phone on aeroplane mode doesn't get messages. So I tried all three local pubs to no avail and went home.

A short video clip of Geoff thermalling his M7.   LINK 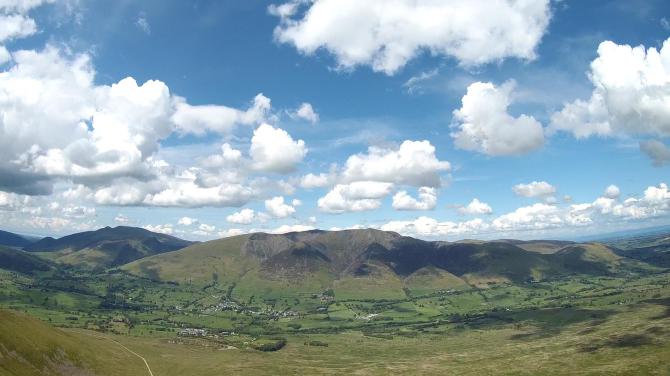 This looked a good opportunity to meet up with Brian and do the GTO 2 drop off. We met up at Penrith with a view to Cold Fell in the north Pennines, but the forecast had us heading to Wolf. The forecast actually had it wrong in many ways, the day was much longer, much better and the wind  dropped away, so the untried Cold Fell may have had more potential.

We arrived on Wolf to a lovely sky  - about as good as it could be to find not a soul until a lone pilot arrived a little later. The wind was quite light, but thermals started popping through soon enough.  We  had set a goal at Grange over Sands - not far, but the wind going more NE and the poor sky further south closed off options. (In fact Millom would have worked better in retrospect).

After a good intial climb it all got a bit frustrating and after a spell on the back of Clough and some rough broken stuff that didn't work -  we headed back to Wolf not really expecting a lot given the wind had now a lot of east.  I landed for a choccy bar, which in retrospect lost me about 5k later.  A strong gust came through which indicated something was afoot so I took off and joined Brian in scratching around until we were soon rewarded with a great climb to near base at 5000'.  It was a good climb, but the NE wind meant it wasn't quite so simple staying on the east side of the Helvellyn ridge.  We made it to Helvellyn and a good black cloud that didn't prove the easiest of comapanions

I can't speak for Brian who was a lot lower and further east, but mine was as rough as old boots. Still - nothing untoward happened to the wing. Brian also found a climb that looked a bit mega as he visibly hurtled skywards and was then above me. Our height made it more appealing to cross behind Dollywagon and we headed towards Easedale, passing over the Lion and Lamb. From this point on the sky changed markedly - the super cu's washed out and the ground lost all sun.  Slightly separated, but both fairly low we got bounced around just south of Grasmere - I heard later Brian's bouncing was more energetic than mine!

A spell of mincing in stuff that didn't work and I thought to call it a day and pulled forward into Grasmere. Now only a few hundred feet over the valley floor I marked a field for landing by the lake and headed there. The wind strength seemed OK, but I still expected a kicking. Actually, as I set up for landing it appeared fine  - fairly smooth.  Turning into wind on finals I got a nice bit of smooth, light lift - worth a turn?  One turn and the drift seemed OK (behind me was Rydal Water and then at the far side trees!  A second turn, then a third, out over the water - actually this was a decent thermal in its infancy - more turns, the drift still not that marked.  From near ground level I clawed it back to 3000' and was crossing Langdale. Well, that was a turn up!

I spotted Brian landing below - tough, wrong side of a river too!  The Langdales still held some sun but ahead looked a bit grey and bleak. I think I should have gone onto Wetherlam and used the ridges but it was 3.15 and school out time at Coniston, so I headed there, landed on the playing field and caught the school bus back to Ambleside. Yes ... lazy but That's how retrieves matter more to me now than a bit of extra distance.

A great retrieve. Four buses within minutes of each other, and after Brian and I reunited at Ambleside we were soon hopping off the Penrith X4, back at his car at Troutbeck and even quicker enjoying a pint in the warm sun. The north Lakes was still a picture - the end to a near perfect day.

A few stills from my video  LINK 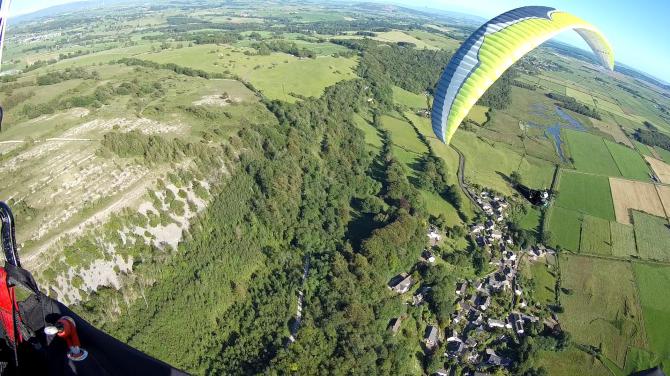 Another great evening on Brigsteer.

We (Geoff, Bud, Dave, Westie and I) waited until the wind had died off a bit, waiting for the Brigsteer golden period - 5pm to 7pm. Again, right on cue it delivered.

Once way from the field (not too bad tonight) we enjoyed thermals along the full length of the ridge - always smooth, and reliable as ever. Brigsteer is a real joy to fly and watching the shadows stretch into the Lyth valley we climbed to over 1000'ato until well after 7pm - Bud claiming 1700' ato at the northern end of the ridge.

After approaching 2hrs of flying we landed at 7.30pm just as the wind died away to a calm evening. A bit of chit chat then Bud set off home whilst Geoff, Dave and I couldn't resist a few pints of Loweswater Gold in the village pub. Great evening.

I'll put this under a single posting covering the three days. I was leading the coaching group which was actaully very rewarding. Enjoyed it a lot and I had excellent support from Malc, David, Steve, Paul, Mark, Jackie etc

Friday:  I arrived on a lovely sunny afternoon, always a good start, to see the odd glider high over the field but most were at take off awaiting the wind to abate. A short but stiff walk up to find over 20 pilots ... deciding. It was a bit gusty but not too bad and the sky was getting really textbook - especially northward along the Helvellyn range.

A few went off with no problem and in (what I thought was a lull) I launched, or rather it was quite a dramatic yank upwards. Wrong time! Still, it all stayed together and I was up, up and away. For the next couple of hours it was superb .. really just a case of riding thermals high and boating about Even after 6pm it was tempting to go xc as the lift, the clouds and the drift all said you do 40 to 50k.  All around the sky was full of gliders - doesn't get much better really.

We convened the full coaching group on the Saturday morning for introductions and outlined our role (as coaches) and plans for the weekend. In total we had 20 pilots with varying levels of experience, some with only a few hours and a little nervous, this being their first LCC, and others with in excess of 50 hours and keen to extend their flying in the Lakeland hills. Some had actually enjoyed excellent flying on the Friday evening from Alcock Tarn and were already buzzing from that experience. The LCC had got off to a good start.
With the A & B comp already making their way up Blease we opted for nearby Jenkin. This provided us more space whilst allowing us to enjoy the flying spectacle of the comp pilots flying their task. Conditions were pretty much ideal with a nice breeze, large grassy take off areas and mostly smooth thermals out front. The presence of a good number of coaches 'White Caps'  meant there was plenty of help and reassurance on hand during the launch period and everything went smoothly with no incidents.  The flying period extended over 3 hours until around mid afternoon,  when the sea breeze made itself felt, not in any rough way - the abundant lift just quite suddenly switched off.  However, the sky still looked good, the sun was out and whilst some had had their fill of airtime - often well over an hour, Malcolm and I offered them an evening options of flying from Seat Sandal.  Quite a few took up this offer.
We set off up Seat Sandal on a beautiful evening with seven pilots who may not have been fully aware of the stiff  walk-up they had embarked on.  Malc and I took the direct route (not doing that one again), whilst the others took a longer, but easier track via Grizedale Tarn.  By 8pm we had all found each other again and the still, cooling evening air meant forward launching was going to be increasingly  tricky!  And so it proved. Before the life went out of the air the first three were away without too many issues. For the rest it became a multiple attempt struggle - however by 9.15pm I became the lone pilot on the hill. It felt a little lonely. A solitary Swiss wild camper became my salvation. With hand signals and speaking loudly I got him to hold up my wing and was soon (very) happily away.
Sunday:
Sunday brought more wind and we deemed it not flyable for coaching purposes.  We ran three sessions and tried to squeeze in a fourth (by popular demand) on Rasp but time eluded us.  With the A & B comp enjoying a walk up Conistion it gave us the time and space to run a one hour groundhandling session that proved very popular, colourful and seemed very appreciated.  This was followed by a general debrief from the Saturday that spilled over into a general Q and A session. Finally, after a short coffee break, there was a quick whiz through some photos from the previous day - people aways enjoy seeing themselves.
Personally, I found it really rewarding and enjoyed the experience immensely. The  coaches worked superbly, a well oiled machine that quite frankly made my life easy enough to take photos and shoot video. I don't have much from the top of Seat Sandal however. Special thanks to Malcom and David May .... and all the other coaches and helpers.
Photo link:     https://aeros.smugmug.com/Flying-2019/Lakes-Charity-Class ic-2019/