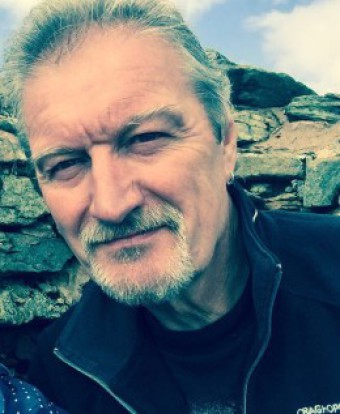 Welcome to the      homepage of Ed Cleasby

Brought up on a hill farm in south Cumbria (Lancashire at that time), I was given the freedom to roam, possibly a bit wild and looking back maybe a bit solitary.  There were lots of seasonal farming chores that involved gathering sheep from the local fells, snagging kale on bitter winter days or sweating in haybarns during the summer. The seasons were far more distinct then as I recall. I can't say I did it with the best of grace at the time, but looking back I value it hugely.

There were also lots of daft escapades involving climbing barn walls, exploring the depths of local quarries, searching for unexploded ordnance and constructing lamb carrying kites. Years later it was such behaviour led into becoming an obsessive rock climber. I climbed, sought out new routes, wrote articles and worked on guides for more than a dozen or so years. When that phase faded I decided it was more exciting to jump off the crags and peaks on a hang glider.

Later, eeking a new direction, this fed into a seven years spell  designing and flying Wasp power units. Although I'd had a paraglider from the very early days, it was just an occasional thing - from 2005 it became the only thing.  Through it all I have survived with barely a scratch, but several close calls and thankfully no PSD I'm aware of.

I remain as enthralled now as I did then. But it's not all adrenaline fueled stuff ......... a day walking in the Lakes/Dales is equally enjoyable, a refreshing ramble that brings its own gentler rewards and ...... I read a lot (never fiction), build all manner of things and always need a project. Ever consistent and essential though  is a love of cafe's, pubs and shared time with mates.

I have been very fortunate. 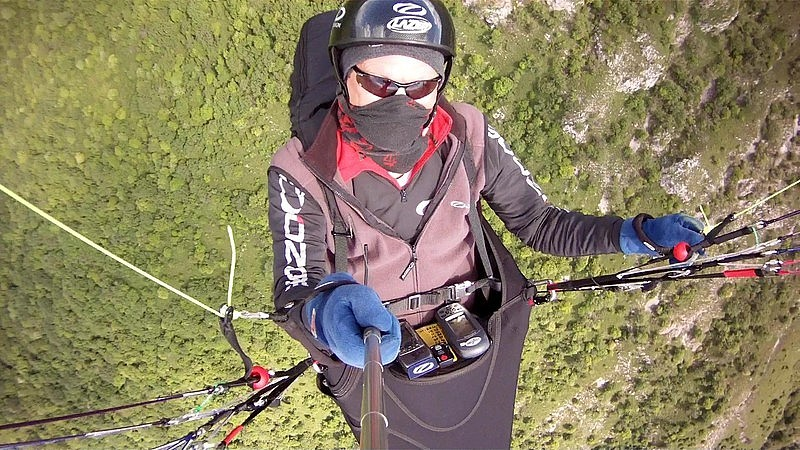 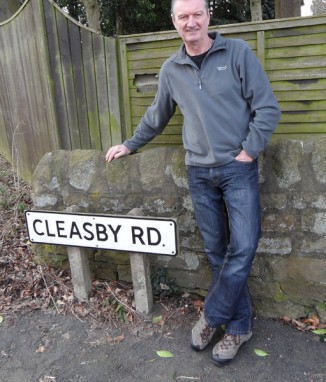 The flying bit in more detail.

I began flying hang gliders in 1979, seriously from 1982, mostly XC and some UK comps plus trips abroad. I occasionally drifted back to climbing, doing the odd new route, but essentially flying dominated.

One of my proudest claims is starting the LCC (Lakes Charity Classic) in '89 and still going strong. To date it has raised over £200,000 which is testimony to the teams that have carried on the good work.  With odd breaks I'm still involved.

By 97' I was a bit bored and looking for a new angle; so began almost eight years of flying powered hang gliders .... initially the Mosquito. This quickly turned into having a hand in designing the Wasp unit (with Chris Taylor) through its various developments and introducing it to the US.  It was an excellent way to fly, very convenient and trouble free - can't say I ever came even close to breaking a prop! Lucky me! It could take you places that free flight couldn't, but it also seemed to lack the extra challenge and excitement that using only the elements, your skill and a degree of chance brings. The attractions faded and my last powered flight was around 2013.

Like many hg pilots the ease and convenience of paragliding was hard to deny, especially once they had got safer and with a performance that matched the first double surface hang gliders. I'd dabbled with paragliders from the early 90's, but was quite selective about the conditions and switched to the hangie for the rowdier days. After going through the usual Apache, Spectra, Sabre, Aspens etc I trusted myself to the then DHV2/3 gliders. From that point it's been a succession of Mantra's - 2,3,4 and 6 with an R10 for the extra buzz moments. I have a reputation for changing my gliders ..... untrue, I just change about once a year, but switch between a couple according to mood or day.

Update 17/9/2014: Finished my book (Dec 2012)  and got that published in Jan '13. nice to see the fruits of one's labours. During 2013/14 I tried an assortment of gliders. Initially I flew the AD Volt, then a Peak 3 for a spell and followed this with a Ucross ......... for a while I had a veritable stable of wings. Not a good idea as it both costs and you never seem to settle to one. Eventually during mid 2014 I went mad and committed to a Mantra M6 ....... the ML size hadn't been out long and I'd always loved the Mantra feel. A bout of selling followed until I retained only the M6 for xc and an 'occasional' wing for odd days out.

Update 3/1/2016:  I still have the M6, but picked up a Nova Triton 2 in December 2015. I liked it so much I have flown it eversince and the M6 is lying un- flown for the past 8 months. I also made a few other changes so a bit of buying and selling. The Ozium has been replaced with a Forza (a bit heavy in comparison, but I like); the Competino and the closed helmet with a more lightweight, less bulky Lazer and I've sold my older Tanto and Charly reserve. I hope that should suffice for a while. Just started flying the M6 again of late ..... for the Autumn buzz!

Update 15/1/2018: Not sure I've made the right decision in selling the Peak 4 ... I really bonded with that wing, probably more than any other wing I've had. Anyhow, I've taken the plunge and bought a new Flow XC Racer, an Australian wing that's gaining a good reputation. I think it will be the first into the UK, so at least something different amongst all the Zeno's.  Once I've got time on the wing I'll post some impressions. Quite excited and expect it to arrive the end of January 2018.

Update 10/6/2018:  This is getting silly!  I sold the XCRacer after some excellent flights (good wing) - couple of cracked ribs which was either bad luck or me (?) in May, then in June bought a nice, sensible Sigma 10.  A nice glider, very mellow, very easy to launch and nice to fly, but no character (?). Being at the very bottom of the ideal weight range meant I floated nicely too. It gave me many relaxed XC flights during the summer. So I then go and sell it .... all I can say is it lacked the buzz.  Now I have a GTO2 for the winter and after that, for 2019 we'll have to see.  Now .... the GTO2 really surprised me, a joy to fly and has what the S10 lacked. Super wing .... and so light. For me it's better than the M6.

Update 23/4/2019:  I decided to keep the GTO2 for occasional flights ... such a lovely handling, lightweight wing. My main wing is currently the Bonanza 2 for xc and the odd sports class comps.  Having done a number of xc flights in sometimes rough conditions I can only say the B2 is a really easy, solid wing that doesn't require a lot of management probably due to it being so pitch stable. And the GTO2?  Sold it to Brian Doub .... his second GTO2 and he loves them too.

Update  1/1/2020:  What have I done!  I sold the Bonanza 2 in early November ,,, it's gone all the way to the Shetlands. An excellent wing that hopefully I don't regret selling, but I tend to like trying new wings. So ... with that I mind I have a Flow Fusion arriving anyday. It will be interesting to try out a new hybrid 2/3 liner and to go a bit lighter which brings Hike n Fly back into play.

Update   15/1/2021:   I've flown the Fusion all season (minus the lockdown) and honestly can't think of any better glider to change it for. It's the complete package and such a delightful wing. Coming shortly will a be a Fusion Light to make a comparison against. Both gliders will be available for demo. That is whenever we get to fly again .... it's getting tough.

Update 10/2/2022:  The past year turned out to be a very good one. Once the lockdown had eased, things seemed to drift fairly quickly back to normal - even the weather was a distinct improvement on previous years and lots of xc flying was possible.  I continued flying the excellent Fusion, but the Light version (which I rather wish I'd held on to) was eventually prised from me by an eager demo pilot.  I've recently simply replaced the Fusion with another - no more than a colour change; and the brilliant Forza harness with a Connect race lite.  Let's see if we bond as well.

I look forward to 2022 with as much enthusiasm as ever - it's going to be good.

Update 20/1 2023   Not a lot to add really. Looking back 2022 was a really good year, I clocked almost 100 hrs and the weather seemed pretty good most of the time. Some decent xc flights and crossing the Lakes from the Dales to the coast with Kev McLoughin was a highlight ....  but many others good memories too.

I'm still flying the excellent Fusion (another I got last February) .... I think it's four now.  The new Flow two liner isn't due until April/May and I'll see what options that provides. 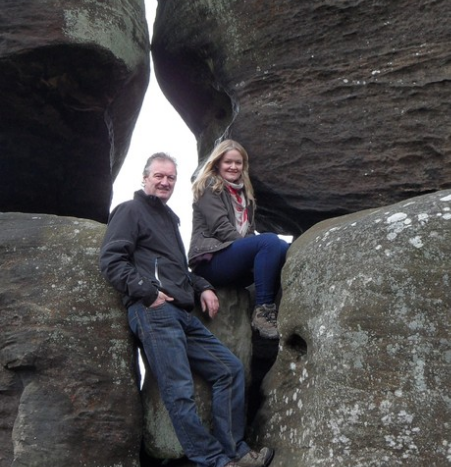 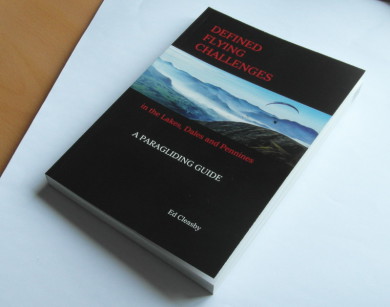