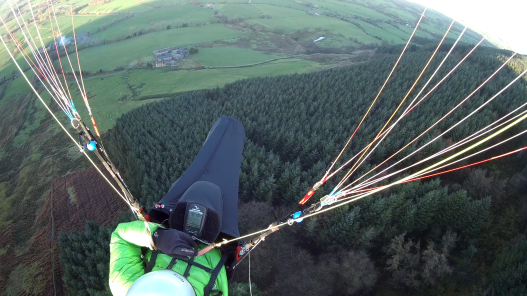 As Longridge came into view, still 15 minutes away, it didn't look too hopeful. Plenty on the ground, but none in the air - it looked like I was too late and the wind had died away as forecast.

Take off had a good group of the Pennine pilots laid out and a smattering of others plus a couple of rigged hangies, but nothing was happening and the wind was quite light. Hope came in the form of three gliders soaring occasionally at the east end of the ridge. Some tried to hike/fly across, some walked, all struggled - it was hell!  The heather was knee high and unrelenting. I tried a short flight then came the payback as I sweated to carry a balled-up wing to the end of the ridge. Never again!

I arrived to find - no wind!

At least there was a cleared strip and a few laid out - or packing intending to head back. Despite the lack of wind the air was actually zinging ... the wing came up easily and there was a certain feeling that just maybe. The alternative didn't bear thinking about and I couldn't face more strangulating heather.  I had a few scratchy beats before gaining 200'  and heading out along the ridge towards the afforested section. No wind ... but very bouyant and slowly I gained 300' and was able to enjoy a lovely, smooth spell of floating without real intent.  I'm not sure where the lift came from but it was nice.

After a while I decided that I couldn't risk not getting back west to take off and once back down to 200' ato (and seeing no one else do more than struggle to even maintain height) I headed back arriving with plenty of height to spare.

Longridge is a lovely site which I'd only been to once before - a bit fickle I believe, but when it works, well worth a visit. I finished off with a pint with a few Pennine lads in Chipping

to round off a decent day and an early start to the year. 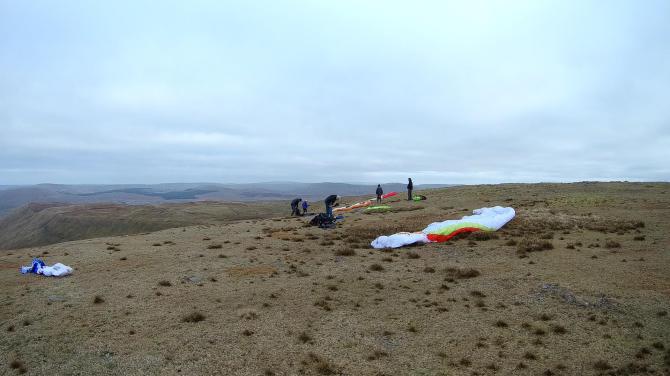 Deciding what nil wind direction is best on Ingleborough summit.

I walked up from Storrs Common for a change. It's a little bit further, but saved leaving my car at the Hill Inn and I fancied a longer fly-down towards Ingleton village. I arrived on top about the same time as various others so all told we had about seven of us with vaguely similar plans.  There was no wind to speak of, but if you waited long enough you may get the merest waft to suit whichever face you fancied. I walk part way to the east face, hit grass and light breeze, got the wing above my head and just ran 50M and jumped the trench - basically.

A nice glide down (always down) ... I hoped to clear the village but launching on the east face meant I just lacked the extra 100' and I had to land on the Common just 100yds from the car.   Drove back up the road but it took a while before other gliders appeared.

The cafe  (Bernies) was shut so ended in Four Seasons drinking very watered-down ersatz coffee from what I could tell. 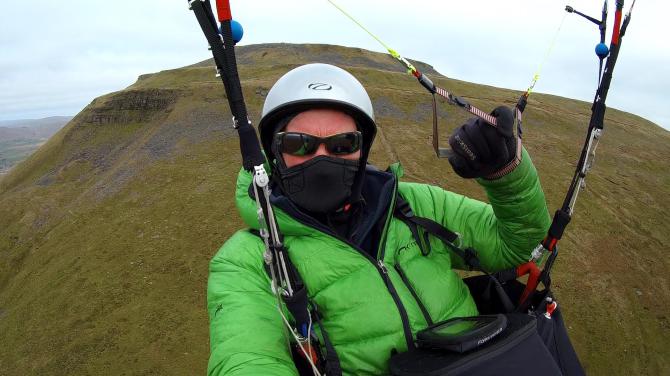 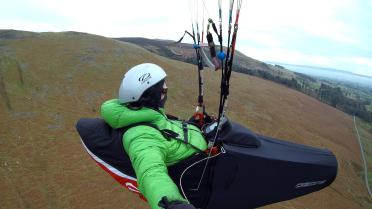 A very pleasant, but rather dead day with zero wind - flat calm even on top.

Flew down and that was about it. I'm discovering the ease of nil wind launches with the GTO 2 - wish I'd got one years ago. It reverse launches so easily in nothing!

Almost spring-like - the sun was out and the walk up sweaty. There was very little wind until arriving on top when a 5/6mph blew directly onto the hill.  I lifted the wing and it seems like it wanted to fly, so took off into nicely bouyant air and enjoyed three or four beats before realising I'd left my sun glasses in the grass on take off. Went in and top landed.

It seemed almost calm now, but after 15 minutes the gentle uphill flow began again.  Took off expecting it to be rather scratchy, but it proved a lot better - in fact within a short while I wes at 300' ato, well out front and thinking - What's going on? Wave?  A trip to the hill to the south and the same smooth gentle lift. Then the answer came -  raindrops splashed onto my flightdeck. Despite the sun shining a small shower was passing through. Not heavy, just rather big drops, so I thought it prudent to land. Spiralled down onto the shoulder and packed in light rain.

Bought a paper and went home - probably too soon as the sun came out again and it looked nice. 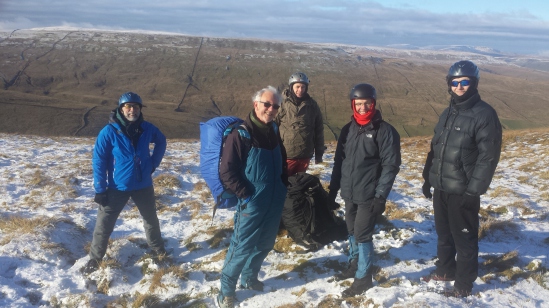 I arrived at the roadhead to find Peter Balmforth, and together we agreed, aside from the cold, that it looked OK. Sunny, wind on the hill and at that time on the light side - possibly why no gliders were in the air. We set off and walked in to take off.

A small gathering of unconvinced pilots with most wings still in the bag didn't look that good. The pattern for the afternoon was set - at times it was light, at other times fresh ... although never over the top strong. Wave was obviously a factor.  As the afternoon wore on more pilots arrived and most took to the air - at one point I counted 12 gliders.  The air was fairly smooth, with only the occasional bump so aside from the cold which downed most of us for warm-up spells. 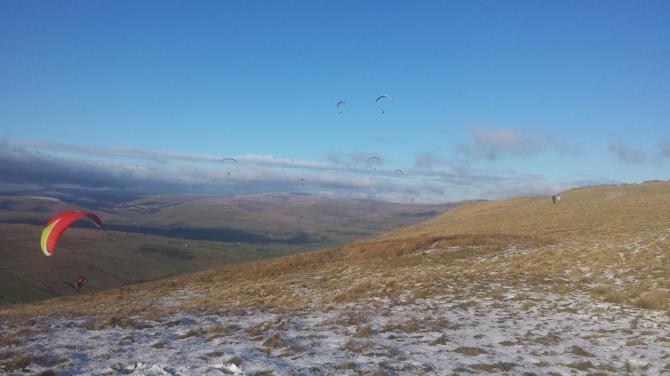 In total I had three flights for as long as my fingers held out - I don't usually feel the cold too bad but today was an exception and I never really got warmed up. Towards the end it got very light, I took off thinking I may even go down but the lift was still just about enough to stay up - then the wind arrived again, followed by the chill so I flew back to my car and called it a day.

Finished off with a tea and butty in Penny Garth