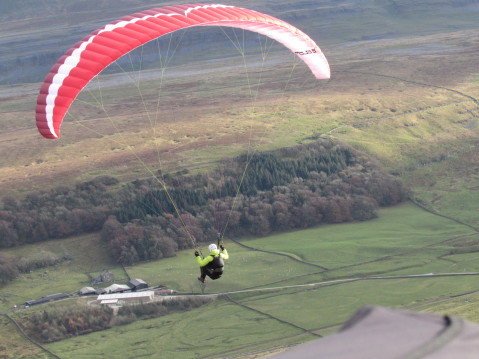 A beautiful morning, light winds and blue skies.  One of the best things about living in Ingleton is having so many great sites within a few minutes drive. So .... several cups of tea, papers read and a two mile drive and first on the hill. Love it!

The 45 minute walk in is fairly easy and especially on such a beautiful morning. I arrived at the lower take off and decided the hill would soar easily from there... within 10 minutes I was airborne and climbing nicely.  At this stage the wind still had some north in it so I stayed towards the south end, expecting it to back later - which it did. There was some great lift around, steady and continous - and for a short while I thought wave (?),  as I climbed towards 1500' ato.

Not long after lots of figures could be seen approaching take off - never seen so many - at least a dozen. I landed as they laid out and had a brief chat with Dean (who had the school in tow) and various DHPC pilots as they arrived.  A few k upwind Whernside had a few gliders and 3k downwind Barkin also showed the odd wing up. It wasn't long before gliders were spread the full length of the ridge - up to and into the bowl of Great Coum, 6k away to the north. It's a super ridge when the full length is working, and so interesting to fly given its varied nature.

From that point on until dusk everyone had their fill of excellent flying - the wind fell to about 8kph but the lift was abundant and widespread. Eventually, I went down to land by the car - followed by Joseph and Charles. It was such a great day out we thought a debrief in the Marton Arms was called for .... so beers it was.

I didn't have my video cam handy so resorted to my Canon for stills - it's not that good to be honest but the best I have.