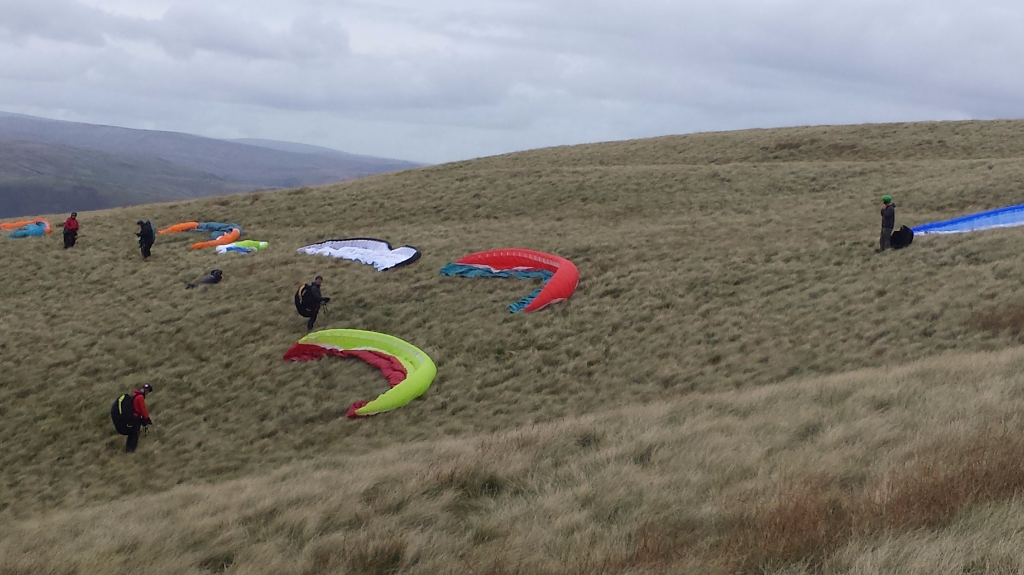 The day looked pretty decent with some Autumn colours showing on rasp and a light wind. Initially it had looked like an easy call to one of the W to WSW sites but Saturday dawned cloudier with no sign of any wind. Lots of Whatsap chatter, but no real decisions so GC, GY and I just met up in Kirkby and set off up the M6. Maybe Far Whitestones, maybe Murton ..... check the windmills at J37, whatever looked the better as we headed north.

We pulled into the FW carpark to find it full both of cars, dithering pilots and lots of lethargy. We added to that for a while before deciding that we may as well make the walk up to join the few sitters on top (not enough wind to inflate a wing up here guys ... dont get too excited).

Steadily pilots wandered up, taking their time and adding to the growing number of sitters. Never seen so many pilots inhabiting the hill. Slowly the hours passed and nothing of note happened, the sky stayed a bright grey, the wind remained  light and our initial optimism for the day faded. But, Hey! ...... some of my best days have come out of such unlikely situations.

By 3pm it looked like it wouldn't happen, but upwind some blue sky and a few cumulus held our interest. By 3.10 the sky drew back the veil to reveal a brilliant blue, wafts of wind were coming up the face and the cumulus looked healthy and fat ....... just maybe. By 3.15 we were off and after a brief scratch were climbing in weak, but consistent thermals. They proved the stepping stone to the better clouds out front and soon they were wisking us to base (3500'). After the first climb to base Geoff C went one way whilst Bud and I opted to continue further out to the next cloud. A radio would have been very useful but in my pessimism of thinking a fly down likely, I'd deliberately stowed it in the back of the harness. Dumb move as it turned out - putting the video camera in the same place didn't help either!

Working silently together Bud I continued south down the valley towards Sedbergh, each cloud working nicely and always another to aim for. Approaching Sedbergh the clouds became more scattered ... Bud headed west, upwind. It was a long way to the next cloud in that direction and I watched him get lower and lower untl I lost sight of him. Then, there was just me - on my lonesome as usual.

A meaty cloud sat over Sedbergh .....   convinced it would work and with no other options I headed for that.  The glide was good and I didn't lose  much height. The first weak intermittent beeps began..... I carried on ..... they got stronger, but still not the core .... I repositioned on the cloud and managed to get a full climbing turn and dropped back towards the slopes of Winder. From this point it strengthened and I knew it was another base-bound climb. It bought thinking time.

Touching base firmed up my developing plan for a triangle with the drift was taking me towards Arrant Haw - my usual OR turnpoint. I arrived there comfortably above the top, but better still into another good top-up climb, one I'd expected to be there given past experience. It usually works well here. I again reached base and dropped back over the high tops to extend the triangle point - base was now about 3600', not high but given the light wind getting back to the forward slopes was no problem. I hadn't set the triangle assistant on my Flymaster so judging the sectors was a visual on the Garmin snailtrail - and it's never easy to do it that way.

I headed back along the tops at height towards take off and sneaked over Fell Head to be greeted by the best climb of the day to a few forming wispies - beautiful flying. Given the height I now had, 3700' I decided to push the triangle TP across the M6 as far as possible - if another climb had materialised even further again. It didn't happen so I turned back, closed the triangle at take off and set off down to land. The nil wind didn't help and maybe a degree of lazy complacency, but I landed not quite where I wished in a heap, sat amongst the bracken edge. Not cool!

Beers and fish and chips in Sedbergh. A great day that like so many came out of an unlikely senario. Best day I've ever had on Far Whitestones ..... all is forgiven, sorry I doubted you FW. 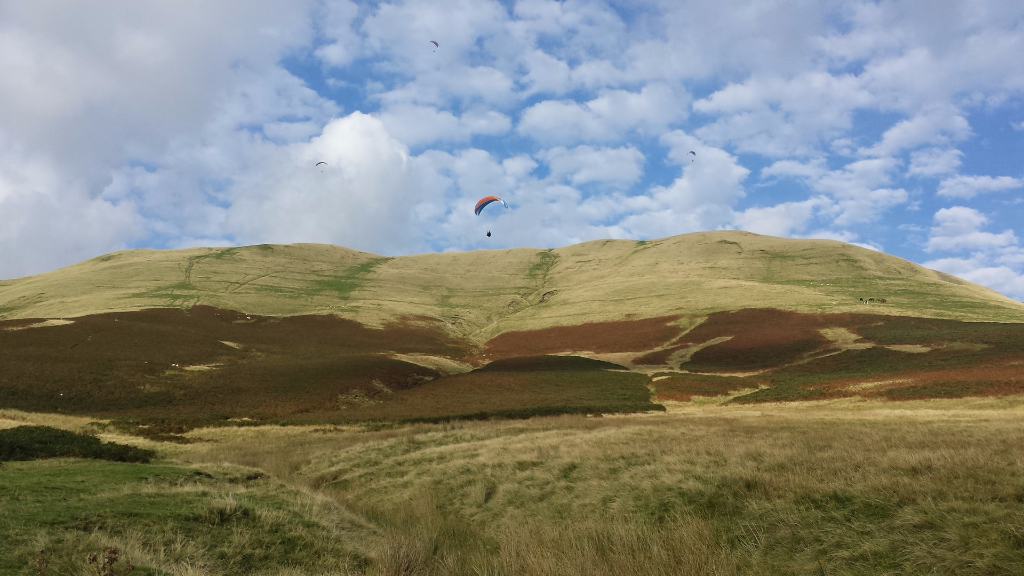 I arrived at the carpark to find it empty - hardly surprising as it wasn't the best of days. Warm, sunny, but very little wind and with the threat of maybe thundstorms from the south later. I walked up for the exercise, laid out and hung around. A while later Ian B and Pete arrived.... later still, Geoff's C and Y, tempted by my optimimistic message.

In short - a top to bottom for all (slowly, it was bouyant out over the valley). Drove down and collected the bottom, very  bottom landers and we all went to the Green Dragon to commiserate over the day. 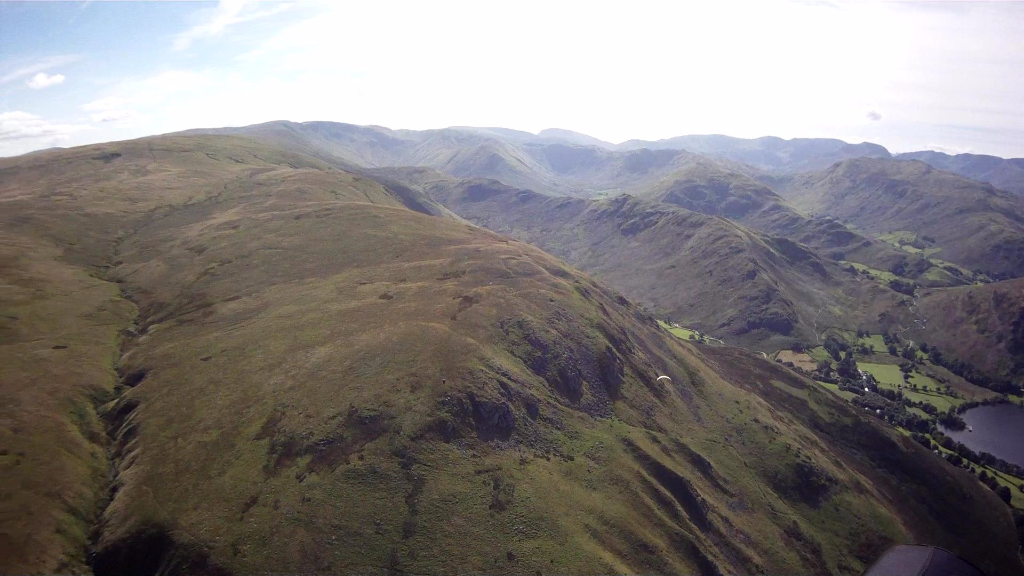 A lovely Autumn day, but with light winds.

There was a nice 45 minute bouyant spell where we all got a chance to fly and use the light thermals (up to about 900'). After that we sat and chat until 3.55pm - flydown time. 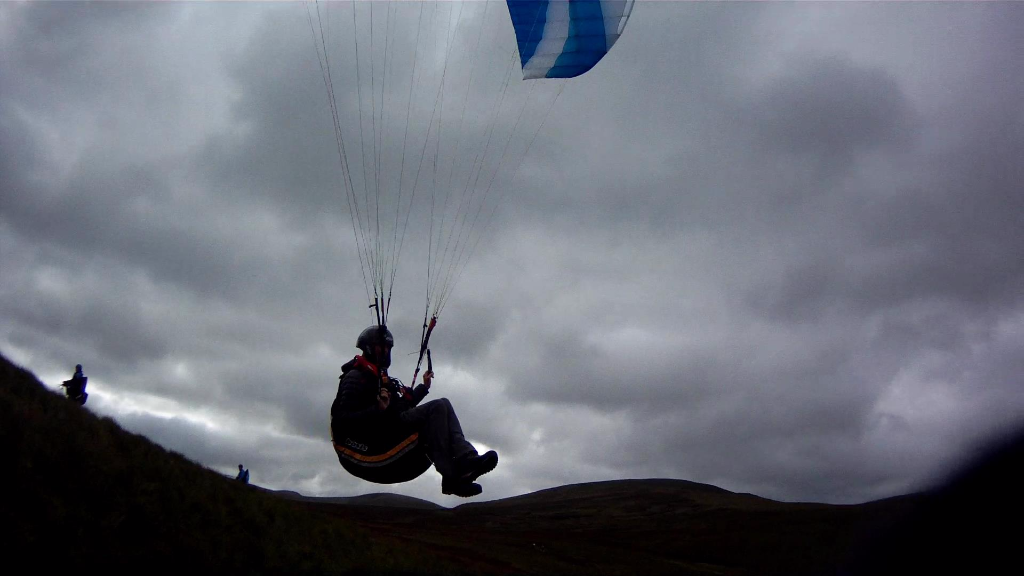 Wolf Crags - Gordy Oliver taking off to demo to students

Dennis and I walked in via the 'long' route as there didn't seem any great rush. The wind was light and well off to the west.

An hour or so later it was no stronger but at least it had come around to NNE so the cliffs had started to work.  Nothing special but had about an hour and a hlaf spread over five flights. No great height and a rather typical Autumn day ........... when the cloud cleared later it left a stunning evening over the Lakes. 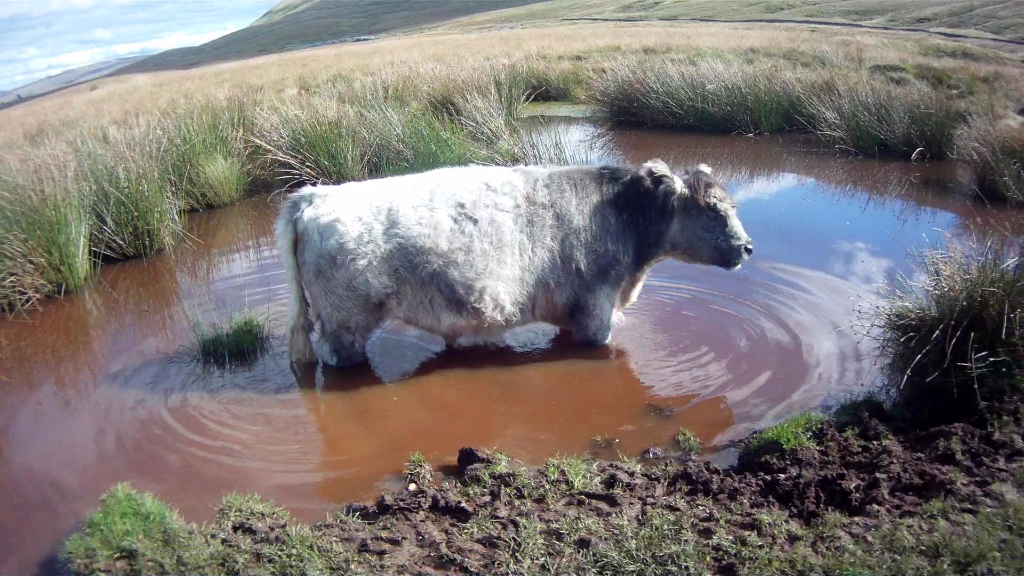 Cooling off on a warm morning.

Beautiful morning with little wind. The best bet seemed to be a walk up Ingleborough, enjoy the view at the top and see what flying was to be had. For once, despite a sweaty back and heavy load, I really enjoyed the walk up. It was fairly quiet around the summit with just a few midweek souls. Earlier a lone flier was seen flying down.

I approached the south face to find a healthy breeze - 10 -12mph and a lot more than I expected. The sight-seeing was shortened and I laid out ready to fly. It was well soarable.  I took off and enjoyed a good spell of soaring with the odd thermal - it's not a long face but makes up for it in height.  After gaining decent altitude I set off south for Ingleton - it was into wind and I reckoned I'd need height to clear the village for my usual field behind the pub.  A good cloud tempted me out, but gave me little - the village was a bit better and allowed some swanning around, videoing and checking a few things out before landing.

The plan had been for a pint or two but being without company I settled for the 100yd walk home and a cup of tea.