I arived late. Not a bad looking day, but it was getting increasingly breezy.

A quite layout and I took aff about 2:15pm. Smooth enough in the air ..... very little evidence of thermal but a bit windy. I discovered my speedbar unattached at my feet - the maillon had become undone. Had about 30 minutes and top landing vertically.

A chance to get some airtime after an awful month of weather! 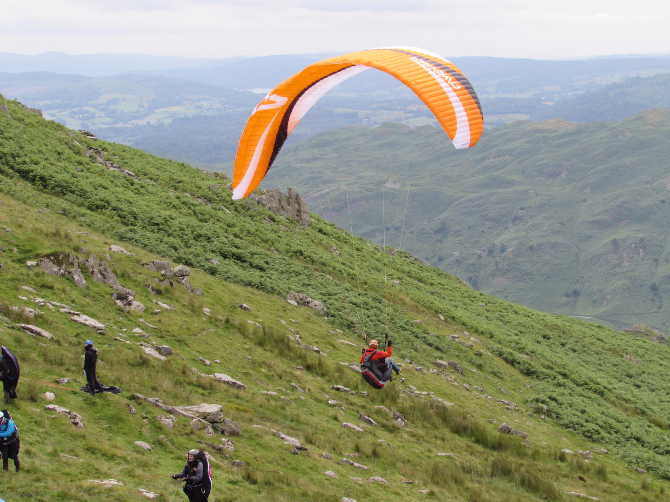 Taking off on task 2

Didn't fly as I was doing the A comp tasking.

Two excellent days snatched out of the jaws of a spell of poor weather. 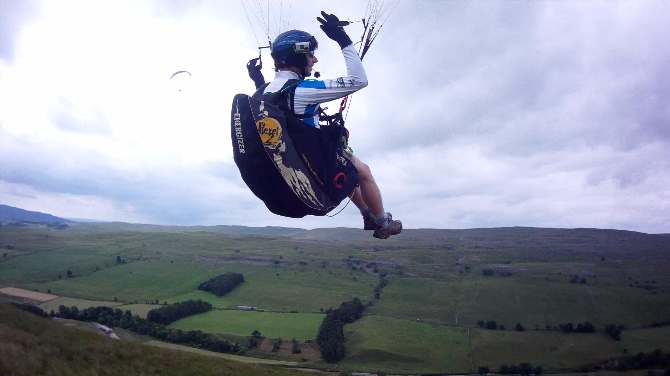 We met in warm sunshine at the Fisheries cafe, Kilnsey and despite concerns about what the wind was doing/might do we headed for Windbank and reconvened on the top before 11am. About a 10 had signed on the coaching sheet plus of course the usual locals and odd visitor. So ......... quite a nice crowd. The wind seemed ..... a bit fresh, doable but not ideal for some so despite Toby acting as wind dummy and showing it was fine for launch and better in the air with the whole ridge working, I suggested using the lower take off as it was lighter. Some did ........ but by that time the wind was actually getting lighter. So back to the higher take off again. We had a good spell with plenty of lift and quite a lot flying .......... the concern was the wind going off to the west, and it did keeping pulling that way. About an hour later it was down to 8 -10mph and definitely seemed to have gone too west to make it unsoarable, except for the small section near take off. With a few asking about going off to Wether I was in two minds - it could switch on here as it was getting brighter and the valley can work well, or we could decamp to Wether. I suggested Wether may be better and if folk wished to head that way we could all get off and follow. That decision was 15 minutes too soon. Some took off and headed straight down ..... others waited, only a short while and ... guess what? The valley started working, slowly at first and then soon it was lifting along its full length. Within 20 minutes those who hadn't left (most) were climbing in large groups and with only a light drift. Really smooth enjoyable lift never strong just lovely ........ this game never ceases to amaze. It was excellent flying and I hope many of the coaching group were among the 20 or so pilots getting up to nice heights. I hung around for a while and took in the spectacle of people having fun, but kept being tempted towards Great Whernside as I watched the higher gliders heading that way. Eventually, the thermal was too good to leave and I headed with a King and Kev on his Mentor to GW ... arriving with more height than I'd left (3800') and touching cloudbase. It was a poor looking sky to work and although we drifted off down Coverdale we didn't do much good. A pity, I think further on it looked a bit better. 10 minutes after landing the sun came out ...... bugger! The lift back was perfect for Kev and I ..... straight to the cars in a Merc within 20 minutes of landing. Coaching wise I felt a bit of a spare part. There were lots of coaches out (David May, Kev, Toby, Fred, Peter .... maybe more ... sorry if I've missed your name.) Everyone seemed fine, their take off's were good ..... nobody actually need much help .... or maybe they didn't shout out. I think the company may be the main thing.

Despite a promising rasp, most forecasts suggested it could be top end if not blown out. During coffee in the Creamery Baz, Geoff and I thought it looked too strong if the trees bashing about were anything to go by.  Driving to the road head at the end of the Wether Fell  track confirmed this. However, as is usually the case we spot a couple of gliders flying on Dodd and doing OK ........ that and the rapidly improving sky tempted us over that way.

Arriving at the Dodd launch it seemed fresh at times, but with enough lulls to make launching no problem - Toby landed and with others arriving we decided it was definitely doable. Having left my phone in the car I went back to get and it arriving back at take off it now seemed a lot more mellow. Within 15 minutes I was in the air and straight into a 5m/s climb to 1400 ato. It was definitely working well, it wasn't that strong and the sky now started to look superb. In fact the perfect Dodd Fell day.

Pushing forward I tagged my start point - and coincidentally a great cloud was growing ahead so pushing on I contacted with this and was soon at base 4200'. The plan had been to go together with Baz, maybe Bud and anyone else going our way. However, they had only taken off and I felt I had to push on. I radioed my apologies and set off.

I headed over the north end of Wether, the height unwinding and nothing happening. Approaching the north side of Semer it was getting desperate ..... a weak, broken thermal kept me just high and heading for Addleborough. The face there is short, not that high and not a place to get stuck. But ........... I got stuck. It wasn't working well, but it kept me airborne. On the positive side, the ground out front looked good thermal territory - hayfields were being worked and the sky held promise. Maybe 15 minutes of patience and eventually on my third attempt to head forward and find something I did connect. It was OK ish ..... but this was probably my best chance of getting out of gaol. so I took it ....... slowly my height increased, I relaxed and the climb got stronger.  The cloud above built nicely and within 10 minutes I was heading into the whiteroom. I climbed a little inside the cloud (they were all very benign) and reached 5000' asl. 20 minutes before I'd been looking enviously up at two gliders at base just to my north - finally I was up there too.

I was in two minds - not good. I knew the best line was straight downwind towards decent clouds - the wind was doing a decent job of streeting them. However, I spotted Baz a mile or two north up Coverdale and although he was lower he was starting to climb. I remembered our promise and thought it would help if we could fly together. It was a long glide crossing the blue to his street, but I arrived at about the same height as he. We climbed for a short while, the thermal rather broken and never managing to consolidate into a good core. In hindsight we should have stayed there - it's usually a good thermal area. Instead I/we hared off over the moors, never high enough to hardly clear them but trusting that beneath that great sky something would be there. It wasn't!

I saw Baz land on the edge of the moor, I flew a little further and despite being low almost found another low save but with landing fields in mind and the core being small and elusive it didn't work out. A climb out at that point would have opened up the whole Vale of York - but another one that didn't quite come off.

Easy lift and bus back to Hawes and a meeting with Toby and Baz for a pint. A very enjoyable days flying.

LINK to a short video

Cloudy morning after clearance of a weak front. Low cloud at first which lifted and cleared by 1pm leaving quite a nice day at this stage. Went to Wether Fell ..... wind very light and mostly from the NE so went back towards Ingleborough which had heli shuttles doing path repair work so that was out. Round to Kingsdale with Dean and the school, the idea being to fly the WNW face of Whernside. OK on hot walk up, wind light and on the hill and a glider flying. By the time I'd walked up the best sky had started to fill in, the wind had increased a bit and gone off to the SW - so ... the shorter SW face it was. Not ideal, but flyable.

Had a 30 minute blast but the sky was now starting to look increasingly ominous over Dentdale and the odd spilt of rain was being felt. Decided when the bigger showers appeared over Dentdale to head down to the car. Unfortunately, it meant going towards the weather and the lowering dark clouds were starting to pull. Went as far as I dared, and then big eared down onto the moors for a 15 minute walk-out to the road.  Just got to the car before the rain came.

Not a good day ......... next time maybe. Still, it opened my eyes to the possibilities of using this side of Whernside for future xc's.