I met up with Phil Dale at the car parking for Whernside, it was already limited by the early batch of pilots who were now on top and showing it was soarable.  We squeezed the cars in a bit lower and set off. As we walked up Phil and I both remarked on the stunning weather and views towards Ingleborough ..... the sun shone in what seemed to be a Dales blue hole whilst further west it appeared quite grey and lifeless. By the mid-point it was T-shirt time ..... remind me this is still March!

A final steep sweaty pull up and we arrived to a perfect breeze and it looked good. A quick set up/checks and I launched with no particular plan beyond exploring and enjoying the long ridge that is Whernside. It's a long and rising ridge and takes some time to negotiate. Moving ever north as the height grew so the snow deepened behind the walls and the volume of walkers increased. Along the top summit the cloudbase was a lot lower, in fact little above the top which tended to limit matters quite a lot.  Later it rose and more sun came out towards the north, that plus some cloud-suck provided decent if short climbs. Best was about 3500 if you entered cloud a touch.  The ridge is huge so it never got that busy. You do see some odd things at times ...... a pilot flying around with what appeared to be a soft, floppy hat for headgear (tied on I assume) ........ a pretty pointless and stupid thing to do.

Most of us tried pushing out front to get a small FAI triangle, but nothing seemed to be happening in the valley - a pity. A very enjoyable day neverthless and being a Sunday quite a lot made it out; at a guess about a dozen pilots and various others came along later. Kerim and Lena turned up - Lena with new wing and harness to try out and she was lucky enough to get the perfect day and site.

Roll on ........ Spring is starting and it's all getting very exciting. 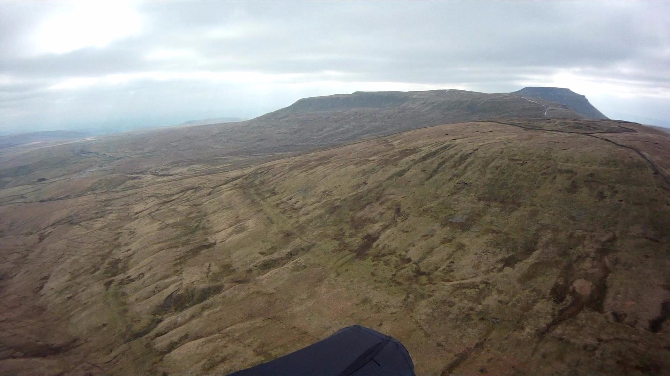 Park Fell, with Simon Fell and Ingleborough in the background

I walked up Park Fell with a view to flying across to Simon Fell and back. I always find this the easiest and quickest way to a take off.

It was rather overcast and breezy on the way up and not that inspiring. Mid-way I rested awhile waiting for the rather gusty wind to ease then carried on to the top. Again I gave it 40 minutes before boredom, cold and  a belief it wasn't easing as forecast set in - although still only 12.45pm, made me set off down the spur. A walk down!  Part way it suddenly brightened, the sun appeared and the wind eased to almost light. A quick retrace back up 100' and I cast out the wing and launched in by now fairly mellow conditions.

I boated around in pleasant, bouyant air - casting glances towards Simon Fell for sight of a wing, but none appeared. With the rat fed and some football looming I poushed out to Ribblehead and landed. A pleasant 30 minutres. 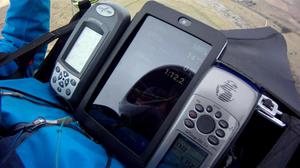 A rather crowded flightdeck. Centre is the excellent xctrack.

I met up with Chris Greenwood and Geoff Moss at Shap and we headed for Barton via the back door. The bridge reopening was due for 1pm I believe. A lovely walk up, but as expected the wind was very light although the sky looked good, especially upwind. Great looking day for March.

A slow laying out of the wing, a bit of udging along and a touch higher and it was a case of wait ....  or chance it and see. I brought the wing up and it felt surprisingly lively in the light zephyr of breeze ...... so I got tempted off and straight into probably the first thermal of the day. It gave me a satisfying 800' before departing someplace and after a short flight I landed to wait it out with everyone else (about 8 on the hill).

Several others intermittently tried their luck including Mike .......... you either got lucky, got a short scratch and back in on top or ............ went down and walked back up. At about 2:50pm it suddenly switched on - the thermals started to be more regular and the accompanying breeze built to make it soarable. For the next hour or so good flying conditions guaranteed everyone some airtime and even the odd trip to near base ..... not sure anyone made it all the way there.

All in all a good day with stunning views, plenty of warm sun and some thermalling thrown in for good measure. Mark Gravestock grabbed a late climb over the landing area and rode it back to Bampton Grange. Later we gathered at the Crown and Mitre there for a celebratory pint as a warm up for next Friday night. 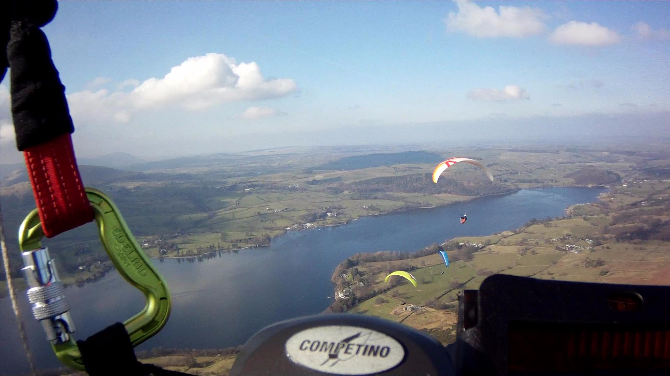 A group thermalling over Barton. 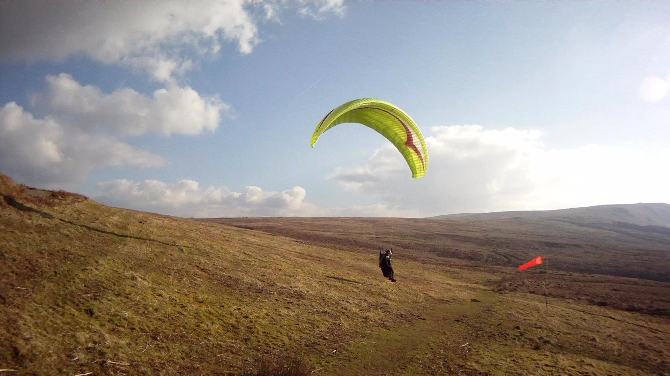 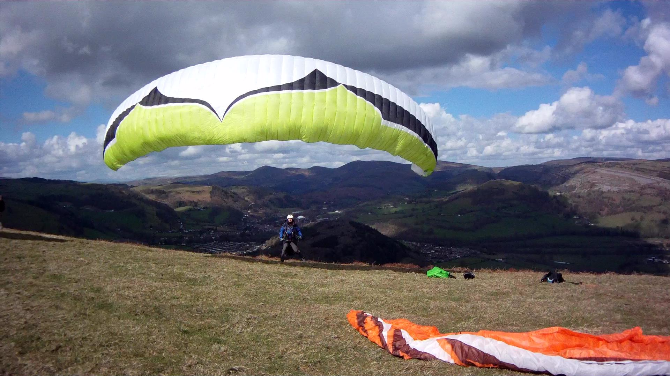 Mike about to take off.

Welcome to the slowest xc I've ever done!

We arrived to a sunny and cu dotted sky at Llangollen. Despite a forecast for very light winds there were a few flying, it was on the hill and was starting to cycle through. I'd gone down with Mike and Ben with Chris, Glen and John H minutes behind in a second car and Pete Southern just ahead and tasked to get in the bacon butties in Chirk. He carried out this task admirably to supplement the ones Ben and I had bought from the same shop minutes later!

The A team started on their big declared triangle during one of the cycles but got caught out after a good start - Jacqui whisked them back to the hill and repeated this role a few times I believe. We had several 20 minute thermal flights, but nothing was that convincing despite an awesome sky, After the third sit around in the warm sun it switched on again and we all were off. I got a quick climb out and although it stopped short of base I dove off downwind (?) ..... there seemed to be little wind even at height. No-one else seemed inclined to follow so another solo mission. I had a cloud and a wood fire drawing smoke in to head for, so despite no great height it had to work and fortunately it did. Another slow climb going nowhere; round and round over the same place and a short glide downwind again - you need a decent drift on a pg to cover ground.. It was tricky choosing the line  ........ full sun and a huge blue hole to the left or an overdeveloped sky and cloud/shaded out to the right for miles. I took the cloud and again it paid off ..... maybe just suck, but it was going up. It had the look of convergence into the mid Wales hills so seemed the better way.

The distance clocked down really slowly and any thermalling was slow and stuck virtually over the same place ........ drift neglible. At 20k I contemplated turning back, but it was badly shading over behind whilst downwind looked sunny and more inviting. I carried on. More climbs and short glides that took a long time, got me over a huge quarry. It didn't want to work athough I cruised around a while - searching. On to the next wooded hill with another lovely stone cairn on top - still nothing. So with height winding down I headed out over the wet, green, flat valley and a main road at the far side. Now very low and bound for a landing field marked and maybe 300' above I looked whistly up at a lovely growing cloud and wished ..... if only I'd had a another 1000', or even 500'. Circling over the farm buildings on landing approach I got a few blips. For the next 10 minutes I worked the blips, till they became full circle weak bleeps ....... first I made 40', then another 50' then it got a bit better as I drifted back towards the huge quarry. Surely not .......... then it got better still and at which point it was well mapped with me well established; it was going places. .......... Damn! I actually got back up. Would you believe it. Once high again and settled back I spotted two gliders heading my way, the first I'd seen  the whole flight. Having marked that climb so well and still circling, here was the cavalry to share the load ....... now it should get easier. However, it wasn't to be ...... they all came near, but then just continued on their way ............. Ben, you were one ...... got you on video! They all continued towards Welshpool and a common landing field. I circled my solitary way over to Long Mountain and the rising wooded ground that headed south for about 12k to the east of Welshpool ..... it looked good thermal hunting ground. About 5k along, a blue glider hove into view with shouts of "Hey, it's Chris" (Radio not behaving) ..... we circled for a short while, then I continued down the ridge line. Soon I was coming up on the Welshpool ATZ and too low to get over so I decided to head back and join Chris. I pushed back north until turning and heading back south for the 'common' landing field. Met Ben, Matt Cook and Chris and we decamped to the handy pub 100yds away. It all worked out nicely until Pat and Phil C flew above high late in the day to squeak around the ATZ and get a bit further. Mike arrived on retrieve ..... off to Chirk and another pub meeting.

Thanks to Mike for the great retrieve and managing to get six pilots and their gear into the Freelander.