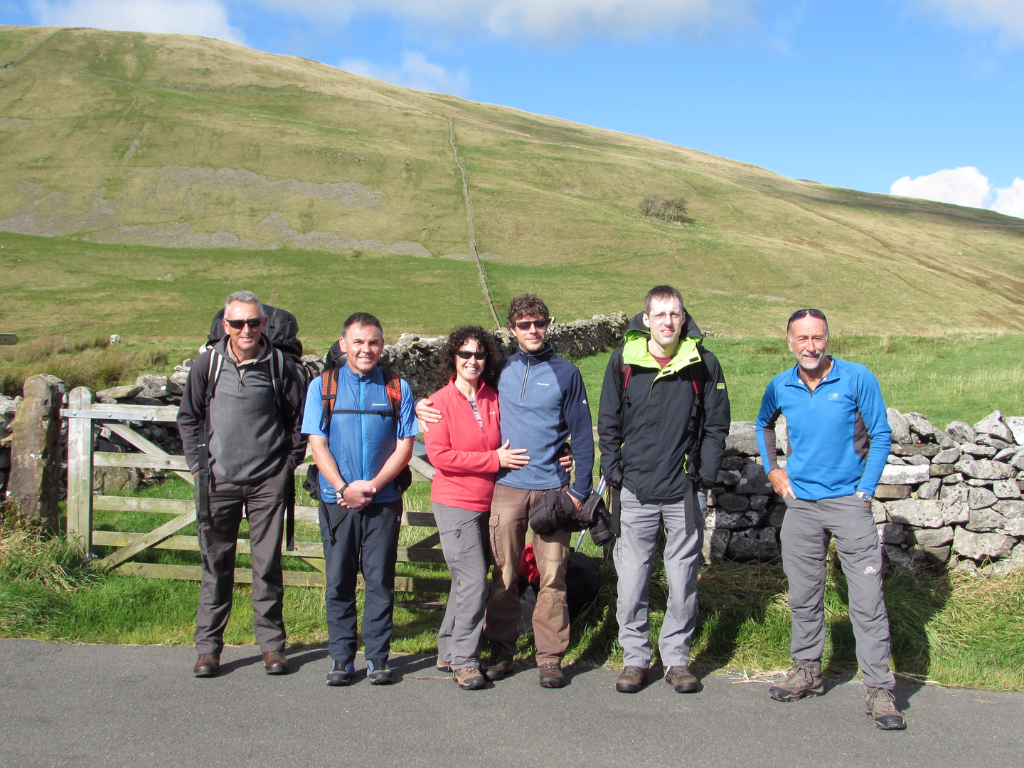 Crackin' weather for October. We met up at White Scar caves for coffee and to make the difficult decision on our best option  for the day.  After some pondering Dennis suggested Barkin, which being handy seemed as good as anyplace. The wind was well off to the north, dropping to light for the afternoon but hopefully becoming more east.

A pleasant walk up in the warm sun, followed by lots of sitting around and waiting. It took longer than expected, but eventually the wind did edge to the ENE and there was a hint of a touch more wind. The sky looked superb, but Autumn skies can flatter.

I launched without too much optimism, just a decent cloud and a feeling that something could happen. It would be true to say I didn't expect a lot. How wrong!

The first beat south  gave a few weak bleeps, the second a little more solid until I could get in full turns. From that point on a succession of 360's over the same place (no wind) gained me a 1000'ato. The lift now improved markedly and the turns got wider under a general area of lift. Eventually, without too much effort, I neared base at 4,700, asl. Did I say Autumn skies flatter? Well this thermal didn't - and neither did the next. Down below I saw the others had taken off and seemed to be soaring OK, ..... so I was pleased they were getting something out of the day.

Being a little unprepared I wasn't too sure quite what to do with all my height. Downwind wasn't really that applicable given the light drift, yet I was fairly sure that my lift was convergence and the Bay sparkled in the distance. In retrospect heading into the hills may have been better. towards Whernside and Ingleborough ..... but I set off for the Bay and was hopeful given my height. But .............. two climbs was my lot. I crossed the Lune valley but given the extra potential retrieve problems turned south then recrossed to land near Barbon.

Lovely smooth flying - just a pity I didn't get enough of it. Stunning day to be out though. 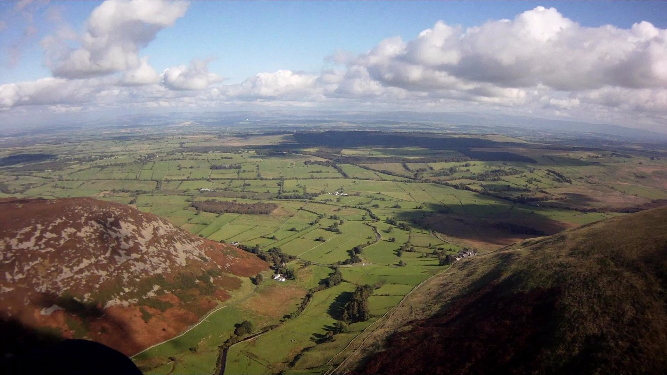 Beautiful early October weather and the start of three consecutive flying days on Carrock. Each day brought out lots of pilots, but the days offered quite different flying conditions.

Saturday 8th:  Easily the best day. It took many coffee's and several readings of the Times before I could face the long drive north. Hence I didn't get there until 12.30pm to find the first few pilots airborne with the rest wind- waiting. As it turned out it was working well and didn't require much more than a gentle waft. Typical Carrock at its best.

Shortly after take off I climbed out with Budd in a decent thermal. Base wasn't that high and over the back hardly an option - although the back face of Skiddaw was tempting. We flew over to Bowscale, Budd quite low, and joined an Alpina - later Phil Q joined us. I had half a mind to do a triangle so after building a little height I set off back to Carrock. Others tried - some made it, some not. Again - it wasn't long before a strong climb got me back to base with a couple of other wings, but from this point we all went our own way. I headed over to West Fell and a little back over the moors to get a modest 5.5k leg. The return journey produced a decent climb enabling a push out front. And that could have been it ....... small triangle in the bag.

For a spell Carrock was simply soaring, with little hint of the better climbs of earlier. Given I'd been in the air about 2hrs I decided to head low towards West Fell and a good looking cloud, if it didn't work I'd land. Wonder of wonders - at the point of being about to turn it started to draw and morph into a strong climb, so back and climbing over the Sandbeds fells I went. I was in two minds; follow it over the back for a modest xc or stretch the triangle. Dismissing the idea of a retrieve to deal with, I pushed the triangle before heading back to Carrock and eventually a landing. Two and a half hours of enjoyable flying - can't be bad for October.

Sunday 9th: I drove up with Cefn, it looked like a carbon copy of Saturday, but turned out to be a big waste of time - lots of sitting around in almost nil wind.   A brief 25 minute flurry of dogfighting activity based on a single weak thermal, followed by a slope landing and another wait. With a shower approaching, the air completely dead we set up for the dreaded forward launches.

Mine did not go as planned!

I laid out cleanly and took ALL the A's in hand, not just the centre two, and ran like hell down a steepening hill. Nothing 'lifty' happened. The wing seemed to be overhead but wasn't lifting me off - odd. I carried on down the hill at breakneck speed, unable to stop and thinking "This could end badly". Eventually I got airborne and looked up expecting to see a problem - what I saw was big ears fully in on both sides. They pumped out easily and normal flight resumed. Phew!

Why the wing came up and the ears tucked I don't know, my speculation is that the M6 doesn't like ALL the A's, especially the outers to be used on nil wind forward launches.

Monday 10th:  Geoff Crossley was keen to try out his new harness and with more wind forecast we headed back up to Carrock to join about 15 others.

More cloud than previous days and although still light it was enough to soar happily without any great height gain. For 30 minutes all was good - until it switched off and seemed to have gone off to the south. Everyone but a few chose to land, the day wasn't that good and Geoff and I decided coffee and cakes topped our list of things to do.  Actually as we packed and chatted the sun came out and the wind arrived slap bang, back on the hill. Some flew, some walked back up ............. we stuck to our to do list. Maybe a bit premature, but three days on Carrock wears you out. 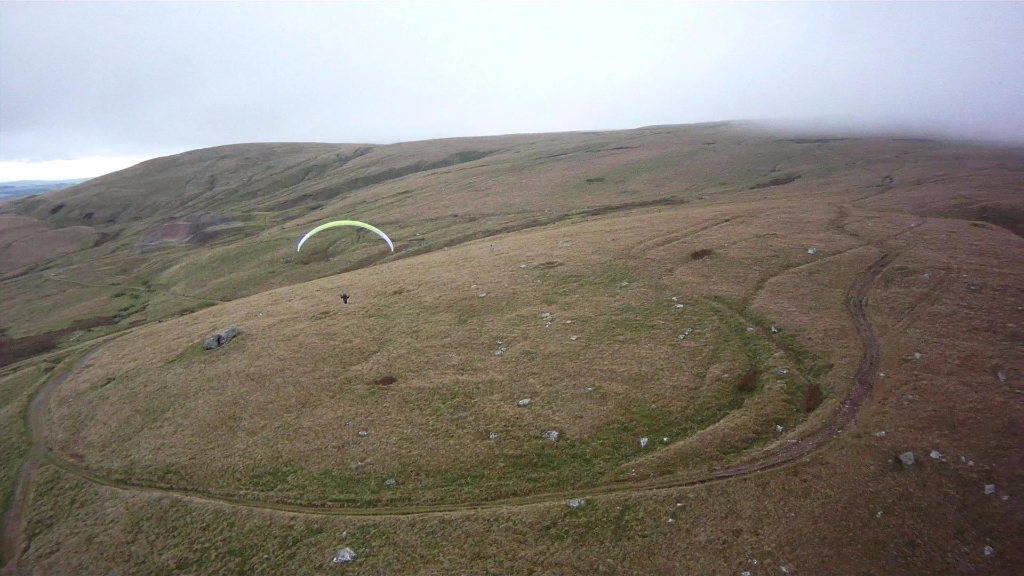 Geoff scratching Sandbeds near TO boulder - West Fell in the far left distance.

Another long drive up to Carrock, fourth in 10 days and pretty much the same result. Whilst the Dales and south Lakes enjoyed sunshine the north Lakes was very clagged in. Still ...... we persevered. Geoff hadn't flown Sandbeds and I hadn't for about 30 years so why not.

We had a leisurely walk in to the take off boulder and found actually a little wind and close to on the hill. One short scratchy flight, then a better one. We headed over towards West Fell as the lift improved a little, probably a result of the shower that seemed to be heading our way.  Nothing very special but we actually got to fly ..... and felt we'd earned our coffee and cakes at Rheged.

Heading south the sun came out, the base rose and the wind suggested we may have done better staying nearer home. 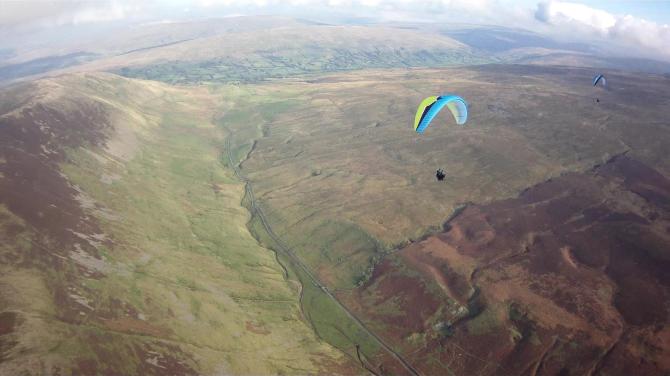 We made an early start 10.15am to comply with Geoff C's cunning plan to  thwart the Dark (non) Weasel. It had to be early given the wind was forecast to veer to the south.

Once gathered on the hill it was all a bit weird, some wind (not a lot) that switched direction every minute and kept putting us back on the hillside after a few beats. Not looking as good as forecast -  even the word 'Blease' momentarily crept into the conversation.  But ......... we held on to be rewarded by a few hours of excellent flying in a stiffening southerly. Despite the very slow progress south down the ridge (twice) it was working along the full length enabling good height gains and occasional trips into the wispies.

Whilst most of us took off at the north end, a cunning Kitt arrived later and chose the south end and passed going north (at speed) as we headed south (very slowly). Geoff, task completed landed for a nursery pickup, whilst Kitt snook off to the Howgills and eventually made it to Great Asby ..... a good show for late October. John also headed that way and landed near Cautley.  The rest of us took the easy option of landing by the cars and going for a Barbon coffee.

Another surprise plum plucked from the jaws of late Autumn.