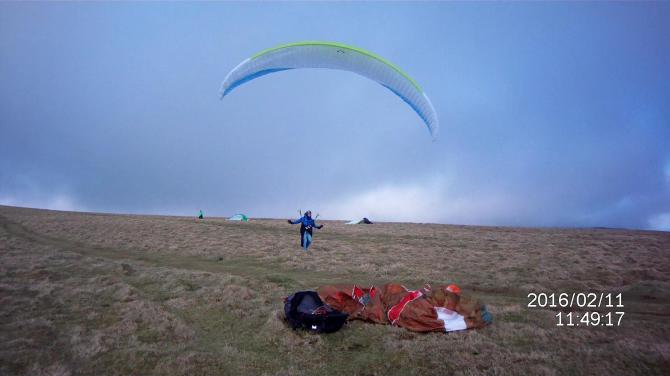 Gary Stenhouse about to take off on Omega x Alps

An excellent, first really good soaring day of the year. I arrived about 11:30 to see five or six in the air and the sun coming out. Heading through the Dales the cloudbase had been clinging to the tops and it didn't look too inspiring - with further north looking better I carried on to Tailbridge. For easy soaring it was pretty near perfect in terms of direction and strength .... about 10 -12 mph but nicely bouyant. A good day to try out the Triton 2 in what turned out for a spell to be proper thermals. At max about 15 gliders were flying and one or two headed over to Mallerstang - landing part way and walking a touch higher. Mallerstang worked well but getting over was harder despite the wind veering more westerly - later it dropped but remained surprising bouyant and backed to SW again.

It was good to see the X-Alps wing that Gary Stenhouse had. A very good looking wing, lots of performance (it floated and glided very impressively) - having seen it in the flesh it would seem to be the wing to have given (according to Gary) it's ease of handling  - it did look a dream machine. But Advance prices are out of my reach!

So - a decent Pennine turnout, a few Dales pilots but no Cumbrians made the short trip over. A pity - it really was a lovely day both to fly and enjoy the views. 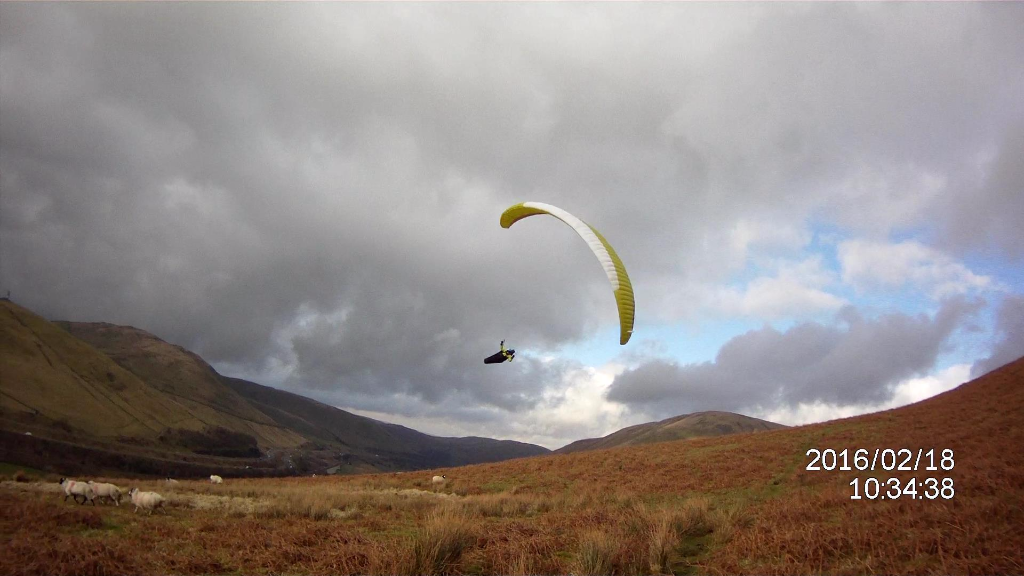 Dave Buxton on Sigma 9 - try to get down!

I met up with John Hamlett at the Hideaway, and after a quick coffee we headed up the M6. Far Whitestones showed a gathering of pilots but the cloud was halfway down the hill so we carried on to Tailbridge to find about half a dozen hangies - but few pg pilots. Although probably flyable it was bitterly cold and not inspiring. After a bit of a chat we headed back to see about four pg's flying FW and the cloud now well above a sunny and inviting hill.

We took off just as Dave Buxton slope landed near us - "very bouyant" shouts Dave .......... " now to unpick my glider from the bracken!". We took off on the first patch of grass and, indeed it was BOUYANT as we got quickly hoisted aloft despite a modest breeze. For the next hour Pete, John and I enjoyed pleasant soaring, only finding with height that the wind strengthened and necessitated plenty of bar. We headed south, well forward and finding little sink and occasional climbs under the darker cloud. When Pete headed back I debated for a while about heading on down to Sedbergh given the good conditions, but opted to avoid a pick up and followed a working cloudstreet out front. It worked well and got me to the viaduct - but it was painfully slow going. I'd found my glasses broken earlier when setting up, and passing through a light snow shower was a bit hard on the eyes. Eventually, I headed back - only to find, like Pete that the lift extended right down to the car park - yet it wasn't that windy (in fact very light at the cars). Various manouvers and big ears and I managed to get down OK ....... even at 50' above the cars it was after taking me skywards again. 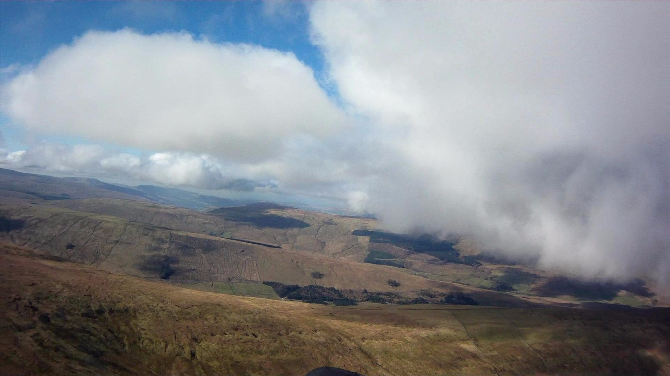 Flying over towards Dodd Fell

Met up with Glen and Chris in Penny Garth cafe for coffee and  butty on what had the makings of a lovely day - and it didn't disappoint.

Pretty near perfect conditions on launch, sunny with a light but decent wind - although base proved little  more than 3,300'. Had several excellent flights with some good thermal coming through and taking us into and up the side of some lovely clouds. On a later flight I managed to sneak around onto Dodd, but half way down on the shallow lower slopes. The wind being very light I headed along to the south end then landed and walked up a few hundred feet. A little more wind and fortunately the short hike was worth it as soaring the bouyant early spring air meant I easily managed to gain a few hundred feet.  A decent thermal gave me enough to get up and back across to Wether. A final scratchy flight and then back to the car to see if I could find Glen and Chris who had got stuck going ropund to Dodd ..... but in the wrong valley!

About eight pg's out and four or so hangies ...... with Tony Fillingham zotting everyplace on his Atos. 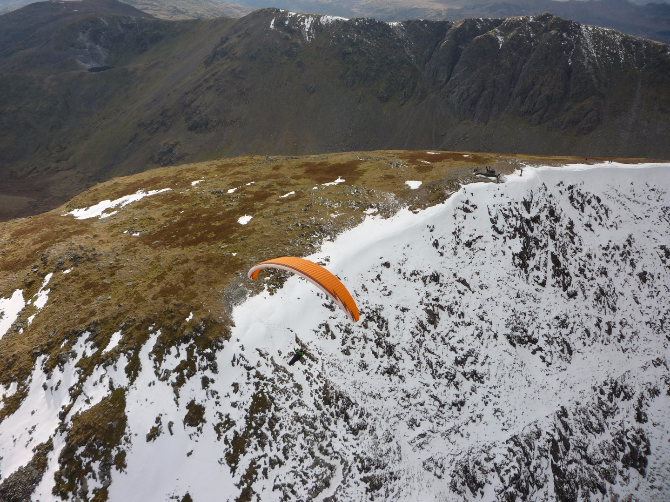 Over the summit of COM Photo: Helen Setnicka

This was a pretty exceptional day, regardless of it being February, and certainly one of the best I have had on COM over the many years I've flown there.

As I walked up, my concern was the wind ..... fresher than expected and rather gusty. However, the sky looked good and it was meant to drop after 1pm. I only walked about 25 mins and decided to wait on a nice grassy patch below the quarry rather than keep plodding and wait for the wind to ease ..... although it was launchable. Several upward bound pilots passed by including Ben Keayes with his new, mini Ozone pocket-rocket - in a small day sack! We had a 10 minutes chat and then Ben continued on up.

Come 1pm and indeed the wind did ease -  almost too much, forcing me to climb a further 100 feet higher to find a suitable clean take off amongst the rocks. A quick launch, and despite the light wind it proved eminently soarable -  and nicely thermic, with regular good climbs coming through. Despite the cold air they all seemed quite smooth with no hard edges ...... all very relaxed.

I didn't really have a plan given the time of year - a bit of a mistake in retrospect!. Using the reliable lift, light breeze and good climbs I headed to Swirl How, hung around a shirt while and contemplated pushing into the head of the Langdales, but the thought of a long, cold retrieve put paid to that thought. Keswick was certainly on and I suspect was a lot easier than usual given all the factors in play on the day - and maybe even getting back? A couple of guys were chatting away on the radio about making for Wetherlam, so I headed over that way under good clouds - and spied on them from high above. Meanwhile they took an (odd?) route in that put them low under Hen Crag - one climbed a bit and made it out to Little Langdale - the other, less fortunate, landed under Hen Crag and had a walk into Tilberthwaite - it may have been easier to walk up 500' and fly out.

With a sort of triangle in  mind I pushed forward towards Tilberthwaite before cruising back at height to COM. At this point the unexpected took over and I probably got technical brain fade. Pushing out towards Coniston (actually I was on a high landing approach, but with height I thought I'd see what out front had to offer). A decent street was the target and over Coniston village it delivered. A slow, but very consistent smooth climb got me high again - surprisingly the wind seemed about zero as my thermal track showed little drift. Continuing across the lake the air was surpringly smooth and bouyant - I gained a little, lost a little. Hawkshead didn't seem far ahead, and given my good ground speed 20kph + into wind and the lifty air i thought about carrying on just to see how far I could get - again retrieve drag made me give that idea up - so I turned back.

The glide back was again very lifty and I arrived with well over a 1000' above the landing area - at this point I should have thought of closing the triangle ( a new shaped one - not the one I'd had in my mind originally). Rather stupidly I then wasted all my height 800m outside my close cylinder ..... in fact so bouyant was the air that I actually big-eared down. Crazy when you look back!

Most others were now down - mostly Dales pilots (few CSC pilots?) and all agreed it had been a lovely day;  in the late afternoon sun it was almost shirt sleeves weather - really.

Magic day.   It's been cracking February.

Video     Apologies for the wind sound on the first third - I did mute it, but for whatever reason it's still there. Damn!!

Doarama      Cos it just got a whole lot better.