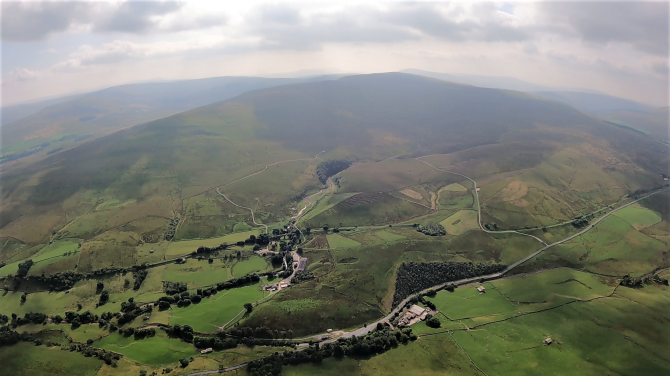 I wasn't able to get out on the Saturday, but Sunday looked the better day by far. The forecast of good thermal development over the central Dales brought surprisingly little media traffic or interest - maybe I was seeing a different forecast. The drive over confirmed this with good looking clouds at a reasonable height (4000'+) and at this stage a light SSE drift. I wasn't settled on a site and was divided between Baugh Fell or Cotterside. After a brief drive over to Baugh I decided Cotterside looked the more certain bet.

This is one walk up I actually enjoy. It was a lovely early autumn day, warm, sunny  with only a light breeze. Given the wind was SSE and light I went above the fell wall to a nice grassy take off about mid point along the face. The ridge was obviously working and I launched into good ridge lift despite only about 8mph  of breeze.  More than enough for here.

There's no doubt this ridge soars well, but best of all, it thermals well too. Everything about the terrain out front suggests it's Stags on steriods.  At the east end the first thermal appeared - one of those lovely autumn thermals, smooth and steady. This became the pattern - regular thermals appeared at the east end, just on the spur. As the day progressed they strengthened to provide up to 4m/s with very little drift. The bonus was a pair of buzzards helping out when required.

At 3,500' I kept debating whether to head over to Stags (which didn't seem to be working although it was hard to tell with so few out - that I couldn't figure for such a good day).  Maybe just follow the climbs over the back and head along the top of Mallerstang - it wouldn't be too hard getting back to the car. But ... I'm getting so lazy!

On one foray out front towards a cloud I was surprised to see a glider circling at base (4200') under a good cloud that was just out of my reach. From that point on I lost him ... a pity, company would have been nice. (Found out later it was Ziggy).  Eventually, one final climb and I decided to go on a death or glory glide over towards Baugh Fell - it would be nice to link the two and fairly easy to get back from. Although there were clouds, nothing seemed to be working in that direction. Over Garsdale Station I had one low bleep or two but nothing that really matured into a climb. A short about turn and I landed by the Moorcook pub.

Whilst sipping a pint I spied Kev and Chris Kay (who had quietly walked up later than me) enjoying some soaring, but the wind had dropped away and the thermals had died off. Once they landed we had a social in the pub garden.

Later - much later, something else happened, something significant which will remain under wraps for now.

* Cotterside is an RA registered site

This was the start of the three day, DHPC social weekend that ran alongside the X Dales'21 event. I'll cover the latter in detail at some point, but suffice to say it ran as a three day event, with the best day being chosen by competitors. This became Sunday as the forecast dictated it would be far improved on the Friday and Saturday - it was.

Following a heavy shower in the afternoon (Friday) the day settled into a more pleasant evening. Chris suggested Blua Scar (an RA site) and about 6pm Chris, Kev, Carl and I wandered up with nothing more in mind than a fly-down into the Social campsite field.

The wind was on, felt OK, but worthy of the upper take off.  We met a nice farmer plus wife and soon agreed to rebuild his fallen wall which had allowed us convenient access to the top scar.  It felt soarable (and was), very pleasant and we all enjoyed a short waft and fly-down into the field. My approach was something I'd rather forget .... a bit of stupidity.

Next day we rose early (or at least I did) and at 9.30am commenced on clearing out the wall and sorting.  Kev arrived and a little later Chris. By 12.30 teamwork saw the wall complete.

Below: Before and after (To be clear ... the wall had been down for a while, we didn't cause it). 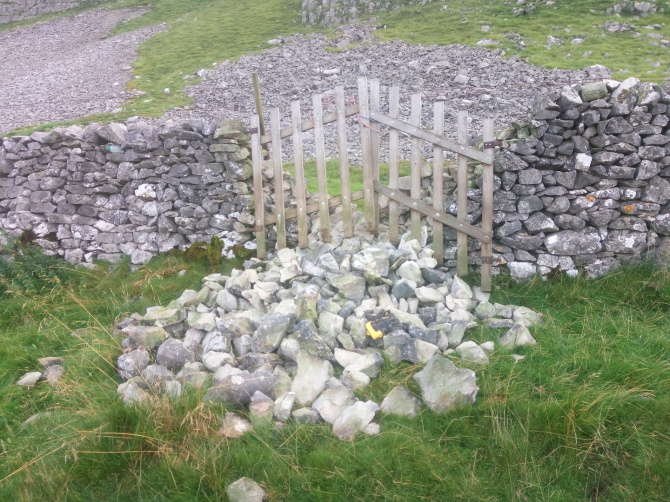 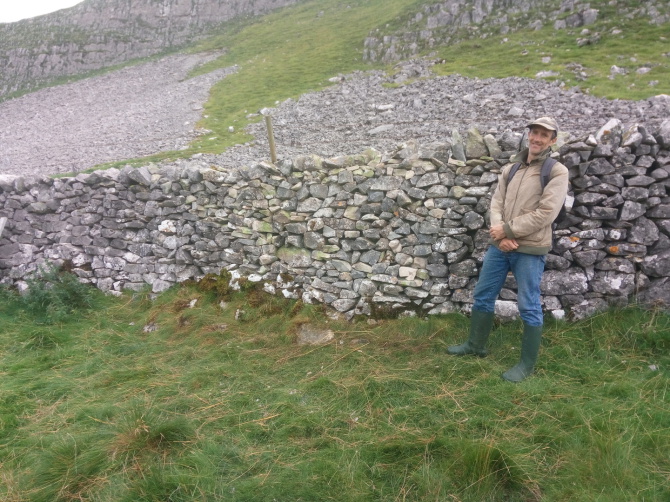 This was one of those 'nailed on' days when any Dales site that takes a westerly was going to work. The question was ... how well? In fact the day  rather surprised with its quality.

A group of us (about eight) opted for Mallerstang. It's a  good xc start point, plus being a long, scenic ridge with a great view of Wild Boar. It was quite light as we walked up but the sky was developing rapidly and the sight of Chris Kay climbing out showed it was working.  It wasn't long before everyone was off and within ten minutes just about all were climbing to a base of 3800'.

We aren't good with radios ,,, in fact I think only Tim Oliver was carrying one and was able to listen in to Wether Fell chatter, meanwhile, amongst us ... silence!  Hence, no one knew what the plan was as we circled to base. I headed back upwind to the hill - just making the front ridge. Tim, less fortunate, landed 300m back and had a sweaty walk forward to take off.

Another quick climb to base arrived and a search for the rest revealed zilch!  They all seemed to have buggered off.  I reached a murky base and decided I may as well go and set off. I'd deliberately gone off the south end intending to flying down the edge of the moors on the north side of Wensleydale. However, it didn't work out as planned. The clouds rather dictated I should go more down Swaledale. In fact it was pretty hard work, never especially high ... slow progress and always the dread of getting low over the 'no go' moors and getting a bollocking for being below 1000'agl and not a qualifying grouse. The climbs tended to start weak and hard to pin down .... once pinned, they strengthened and base soon arrived. By the third climb I had it hammered into my head not to get complacent  -  base wasn't that high, just over 4000' and you soon lost that after the climbs.  Slow and steady.

Circumstances dictated (a climb over Grinton), that I had to squeak around the north side of Bellarby, with wasn't ideal as the next cloud (they were thinning out) lay around the back of the D area. I got round, got too low and just couldn't quite make the next cloud (see last photo).  A real pity as I usually get a climb and cross the VoY at this point  and sort of know the way. I just didn't get the climb that would have got me established. Still 42k seemed OK as I landed. That is until I soon discovered the rest were well on their way.

Special mention and congrats to Tom. Remind me how long he's been flying?  Tom managed 43k a great PB. He is now a marked man and worthy of pimping off.

Four of us arrived back in Hawes within minutes of each other. It seemed the sensible thing to have a debrief over a pint at the Crown.