The morning was quite stunning with a clear, blue sky but taken up with various jobs including a trip to Bradford and a car service.  By 1pm I was free but the word was the wind was light ... wherever I might consider going.  A month before I'd been contacted by a (shortly to visit) visiting US based pilot ... today I suggested may be the day (the only day) that looked possible. With that in mind I messaged my intention to go to Three Men.

I arrived to find no one else, but the day remained sunny and blue and the wind seemed OK so I set off up.  On take off it seemed fine ... a little off to the SW, a tadge light, but soarable. One short scratchy flight, followed by a second better one as the wind strength improved. By this time John (visiting pilot) had arrived on take off so I landed for introductions and a chat.  John was low airtime so a briefing seemed in order, especially as the wind had increased further, some thermal was starting to come through and  for a spell it was a bit bouncy.  He decided to go lower and do a spell of 'kiting'.

Geoff had also arrived and laid out 100m alomg the slope

From this point the day really did spring into action. Good clouds were now building out front and the sky was looking rather good. Geoff was first to taste base .... not high, although it felt higher - maybe 3000'.  My concern had been the wind strengthening further, in fact it did the reverse and coupled with the good climbs the air became surprisingly smooth providing very enjoyable flying. We pushed further out front - each cloud working well and very predictable. At one point a buzzard (a rather large one with great tip feathers) showed me how much better he was than me - whilst pointing out the best part of the climb.

Having been in the air some time I thought it would be nice to head over Tom's place before setting off back to the cars. Geoff followed but instead went and landed by the 'diggers' ... his potholing buddies.

John arrived on foot, he hadn't had a great afternoon but seemed content to have been out and escape relatively unscathed after a rather rocky landing.  We chatted, he left and soon after I collected Geoff before heading home in time for tea.

A lovely, and rather unexpected afternoon.

A few stills from video  LINK

Geoff and I sat, waited, but the wind remained stubbornly light and well off to the south. Eventually, despite nice clouds forming as they had Wednesday, we took off for a fly-down. 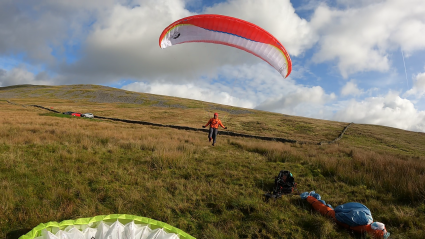 After not flying 3Men for a while, I found myself walking up for the third time in a week. And it proved to be a good choice.

When I arrived it was a light westerly at all levels, but forecast to increase so I was quite optimistic. The main question was, would it blow out?   I waited on take off until I felt it might just soar, it was now about 11.30am. In fact it was surprisingly lifty and I soon had  200' ato. Andy arrived at this point so I landed for a brief chat and took off again; Andy followed a short while after.   We had a lengthy spell of soaring along the ridge and out front, the clouds providing reliable lift. Shortly after midday Tom H turned up on his mini wing - it was a bit too light for him at first but later it became ideal.

And then there were four.

The lift was good,  there were odd lighter spells and a number of slope landings at first but generally a very pleasant afternoon on a lovely autumn day.

The stills don't do Andy's landing justice. Almost at the point of touch down near the cars he managed to go up again. It appears that in a westerly the lift really does begin low down. In fact - below the carparking!

A stunning day.  On the walk up my concern was too much wind and well off to the north. In the end it became quite the reverse as the wind died away and went off to the south.  However, I got lucky so can't complain too much.

Whilst others walked past, I reasoned it was perfectly OK to use the mid point take off into the ENE bowl.  The sight of Tom S  quite high and climbing boded well.  My climb out was much easier than expected as the tail end of Tom's thermal hoisted me a comfortable  500'. Confident that the clouds were working I headed up the ridge a few hundred metres to take a better climb .... then on to a better one still. Clouds were now forming nicely. Kev was below but never really managed to connect. Approaching Green Hill it seemed all one had to do was find a cloud and head out towards it.   There's something a bit special about thermalling in late autumn on a supper, scenic day .... magic. The climbs were big and smooth, all the way to base at approaching 4000'.

I had a sort of plan, but given the day was turning out better than expected, I decided to extend it. By the time I got to Great Coum, the usual turn back point, I had yet another climb. What was noticeable was the zero drift .... just round and round, going up and up in the same place. Brilliant!  Forget ridge lift - there was none, it was all about finding thermals and staying high.

Reaching 3600' I decided to continue on into Dentdale. A great cloud sat over the middle of the valley and was just too tempting.  The sink wasn't bad, but I lost 1000' and the old quandry of carry on or turn back came into play. A sensible, braver man would have carried on. Being neither and nagged by thoughts of being grounded in Dentdale I turned back. My intention had been for a 20k plus out and return - now if I got back it was more like 16k. At this stage I was confident I could make it back despite an absence of wind. The problem was a blue hole that didn't bode well.

Heading back into Great Coum was somewhat sinky and I arrived below the top. Ridge lift was absent in the almost nil wind but I managed to work scraps to get above the top.  Staying would have perhaps been better, but again I hared off south lured towards better clouds which all seemed to be down to the south.  Midway a weak climb gave hope but never materialised into something better. By Green Hill I was down.

The next three hours were a serious hike and grind along the top ridge with short hops if any wind came through - mostly it was now well off to the south or flat calm. Finally, I flew down to the Turbary Road and had a lengthy hike back to the car.

Very much a day of two halves.  The first part special, the second just hard, sweaty work. Still ..... it wasn't a day wasted.