I was time limited as I had to be down and away by 1pm.   Initially this didn't bother me as I thought by then it could be blown out.

I opted for Park Fell for its convenience and I went for an early start - 9.30 at the bottom.  I thought I'd easily be the first on the hill but Kev was booting up as I arrived and within minutes Shed, then Dave J, then Tom arrived.  There was a bit of breeze, but it looked OK .... actually from that point on the wind decreased if anything. Fortunately it was a booming sky.

I took off low in a light waft and being a big hill I went up, Chris Kay had sauntered round for a chat and he took off a bit higher ... then soon went sub orbital. By 11pm we were starting to hit base .... nice thermals, solid climbs, fairly smooth and working well despite it still being early. Given the reliable nature of the sky I headed upwind ... maybe 25kph, it was surpringly light at height.  Over Blea moor I was looking down into Dentdale and thinking all sorts of silly thoughts. However, the dominate  factor (pain) was cold hands, especially the left where the previous week's war wound was kicking in.  I headed back and top landed in very little wind. Chris too came in ... or tried, despite it being light it was also thermic.

Others arrived including Kerim.  We had a very light spell - wait, try it and slope land followed by a walk up. The sky was superb, the forecast wind just didn't happen. Running into my last, remaining 45 minutes of  available flight time I took off as it seemed stay upable.  Shortly after most others were in the air, scattered far and wide .... and very high in some cases (5000'+?)  Any other time it would have been an away day with company.  By now it seemed a lot warmer in the air .... hotaches sorted things and sun had some heat.

As the clock struck one I landed by the car and packed in warm sunshine and windless conditions .... overhead gliders were hard to spot they were so high.  One of the best spring days. 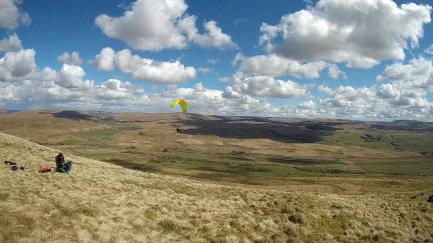 Don't let the photo fool you - this sky was about to go ballistic over a fairly wide area.

It was hard to know where to go. Light winds and a RASP that suggested it was too unstable. So it proved.

Tom and I headed for Park Fell, given it can take several directions and I had to be back by 2.30pm it seemed as good as anywhere. We arrived on top around noon to find a lonely Tam preparing on the NE face. It was light, but occasional gust would rip through suggesting

it was pretty spicy out front.

Tam bravely sacrificed himself in a light gust, hung in for half a dozen beats then steadily ended up at the foot of the hill. Tom and I sat, waited .... and waited. It was now mostly windless. Eventually Tam sweaty vested his way onto take off for take 2.

The clouds looked good, actually too good. First to our distant left, then right towards Settle and ahead over  the moors in front big hail/snow showers were extending to the ground. In the first waft I was away, the plan to just head out over the spur and push forward for a good cloud. Directly in front of take a rather nasty beast lurked .... rough, hard and taking no prisoners. Tom had followed and perhaps more courageously than I tried to wrestle it to the ground. But it gave me a few hundred feet which made heading out front slightly more hopeful.

Someway out, well below take off,  I connected. A proper thermal without the nasty characteristics of the first. This gave me a good climb to 3,800' ... about 2,200; over take off. I should maybe have worked it higher but I judged it would get me home to Ingleton.  However, given the sink that followed and the zero wind at height it took two more thermals, one low over White Scar caves. I didn't expect a thermal here - a really good one too.  I rather wish I'd exploited this second thermal - it  was solid and going places. However, a peppering of light snow and knowing I was back over the village meant I left it after a mere 500;.

Still, an enjoyable day, some exercise and good company. In retrospect I don't think we could have opted for anywhere better judging by reports.

I didn't intend to go out, nice morning though it was, I felt it would soon overdevelop as the previous day had. When Toot messaged about Semer N, I got tempted and tooted over there. It was too windy at the Semer parking so I scrubbed that idea and headed back.  Approaching Ribblehead two gliders were flying over Park .... one went down and the other was doing OK.

Walking up it felt spot on ... NW and just a nice windspeed. I laid out very low, sure it would be OK and it proved to be. A few beats and I was passing Dean and the school setting up a little higher. 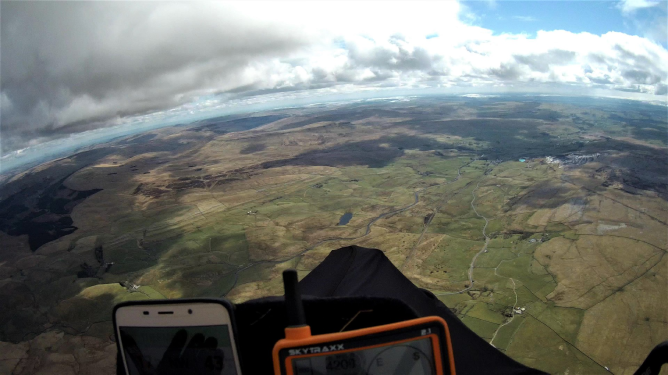 It didn't take more than five minutes and I was climbing out in a good thermal. Reaching 4'300' and thinking, "Well this is easy" ... I set off downwind. The sky looked decent and I was pretty convinced the next climb would soon be connected with. It didn't happen.  Each cloud seemed to break up, or dissipate and heavy sink wound off the height fast. I still felt it was only a matter of time until something turned up. Eventually getting low over Helston Bridge something did start happening .... Phew! A get of jail low save.  It was rather broken and my initial optimism faded. Three or four turns and ....maybe I lost it (search though I did) .... maybe it was an isolated little burst of lift. Either way I was soon decked.

Before the snow showers arrived I got a welcome lift back to the car by a very nice couple. By this time the sky was starting to throw big snow showers and a few lonely figures could be seen on the Park Fell skyline.

Finished with a burger and coffee at the butty van .... very nice too.

Very few photos. I've decided to upgrade the camera as the quality seems to be fading. LINK

The two Geoff's and I didn't  leave Ingleton until gone 11am. The first problem arose when a road closed sign appeared on the road over to Hawes. A look on the local fb page suggested various work-rounds - so we drove Oddies Lane to come out at Chapel le Dale. Only to find it coned and with a man in a van standing guard. I'm afraid to say we harranged him .... or rather his managers.  No signs on some roads, no information .... as others were also to find out. Shocking! He was a young lad .... he took it well. Someone had given him the dirty job for the day

So we back-tracked and drove over  via Horton.  It was now getting on for noon. Gliders appeared, lots and high over Dodd as we passed Newby Head. Geoff couldn't resist informing all the rest of our group who were becalmed on Clough Head ... the very top!  Arriving at Dodd it was very quiet ... they'd all buggered off.  It was light ... off to the north and rather scratchy. One 15 minute flight and I slope landed. For the next hour it was light and pretty useless ... I know, I tried. Each time a few beats saw me higher up the slope until eventually I was as high as you could be.

Then, now well gone 2pm ... it felt a little better so I took off .... scratcheda little then connected and climbed to 6300' I wended a very cold and lonely path down to Harrogate until I could suffer no more pain and no more high climbs. I'd also stupidly fogotten my glasses. Not only were my hands totally numb, the damaged finger from a week ago  (cut it on a bandsaw) was a mere numb appendage!  My eyes were suffering from the cold - so i shut them for long spells to ease the stinging. On glide it became ..... look, aim, close and count - I could get to almost a minute before taking a squint. VFR it wasn't. In the end I looked forward to getting low for a warm up .... and eventually the field I've landed in twice before. I thought about passing over Harrogate with Wetherby as next goal ... but does it have any public transport?

Getting back was all going so well until a fatality on the line west of Leeds reduced options to  buses, a short train ride from Shipley, a very expensive taxi and a begging message to my wife. My £17 train ticket to Settle had seemed very reasonable .... then the costs racked up!