Lockdown 3 curtailed flying during January and February. First local relaxation arrived on March 8th - to coincide with a breakdown in the weather as the jetstream slipped south over the UK.

LINK  (Just pre-ending of Lockdown on the Fusion light). 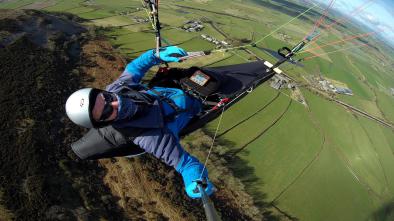 More than good, an excellent day of flying (that I didn't see coming).

I decided on a prompt start .... by 9.45am I was away. Initially my thoughts centred on the Dales or Pendle, but the sky screamed go west. That was where it was sunny and the wind lightest. Today, going west meant Farleton ... in some ways an odd choice. I'd not flown there for maybe ten years, but on this day it held all the cards.

I walked up via my own preferred route from my own agreed landing field by the car. The day was developing nicely although some concern centred around whether it would be too windy. I emerged from the tree-size gorse onto the upper slopes. Ummm .... still  rather breezy, a bit gusty but it seemed OK.  I expected the wind to increase (it didn't) ...I expected a NW (it was), but this is Farleton and it always goes W at some point (eventually it did). I didn't hang around and was soon in the air.  The NW face is more shallow than the W face and despite a fair wind it has little compression. Conversely, the W face is steep, really steep and the compression is bad, really bad ... in the air fine but sometimes as impossible launch. Hence, if possible I launch on the NW face and fly round.

I expected it to be rough, a bit rock n roll .... but it was very smooth. Infact the best flying to have after an extended time off.  I went for a top landing .... memories coming back from many decades before when I'd spent many hours hang gliding here. Everything was easy, straightforward .... except small, very small blackthorn have been planted everywhere. Meet one and they are line grabbers par excellence.  Small, 12" high little buggers!  One real highlight was when first one, then two ... followed by several more buzzards marked a thermal. So interesting climbing with then, and so close you can almost see their minds wondering who/what this strange flying person is. Beautiful birds close up.

As the wind eased through to light more and more took to the air. By 4pm I'd had my fill for the day - well satisfied. I may even have missed the loveliest spell as gliders seemed to be high and floating mostly now on the W face. I think some flew to around 5pm.

An excellent day out. Really enjoyable and a great way to kick off the year.

I need to get a muffle for the mic. I had some live commentary, but the wind blew it away. 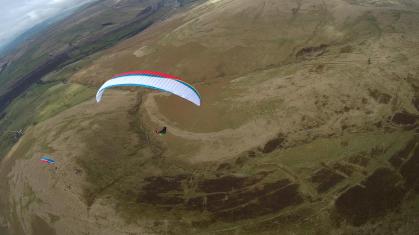 I eagerly looked forward to Sunday. It seemed a pretty nailed on day for flying with a decent forecast. The only question was where - lots of options, but all centred around the western Dales. That seemed best for lights winds, lots of sun (later) and ... well, it was fairly handy.  I settled on FW simply because it has a nice range of hills to explore.

I was one of the first to arrive and all looked good. As it was on the light side and yet to fully pull onto the hill I spent some time switching gliders. Onto the harness went the Fusion Light for only its second flight and still at the testing stage.

I enjoyed a very nice hour and a bit until nippy hands lead me in for a top landing. Shortly after Westie followed and I gained an interview with the man himself .... The Grey Man (as he has now dubbed himself). His training regime borders on masochism .... certainly not for the faint hearted or weak of leg!

A second flight followed, lots of company by now, the sun was out and it felt quite summery. After a while I headed down the range - never very high and mostly hugging the grassy hillsides.  On the way back I had a low(ish) crossing of a gully, with a hill in front towards the back of Fell Head. It felt a bit spicy (rotor?),  just a disturbed little beastie ... not sure what. Suddenly  .... the full wing reflected some turbulence, I looked up to see the full span very gently close. Before anything developed, a short dab of brake and just as a quick it was fully open with no fuss or sound and flying happily again. Probably almost no height loss .... but it certainly added a note of caution as I scraped deep into the back slopes, got up and headed out. Not sure what it was.

With a need for food I eventually landed, chatted, packed and watched a few pilots coming in to perfect landings. Nothing at all to excite the video camera.

Lots of video I'll never get round to editing, so it will have to be a few stills.

PS: The FANET side of things was interesting and useful to get to grips with. I added a few instrument screen photos for anyone interested.

Three Men:  I was on top by 12 O'Clock, just as Geoff arrived at the bottom.  A March heatwave day apparently - it was certainly jackets off on the walk up. The wind was light, maybe just soarable, but the direction was too far off to the south. It really wasn't having it.

I decided to get across to the south face (? - it's VERY shallow) and by walking and a long floaty glide over two walls I made it.  Somehow .... I managed to step through a line, that escalated into a 20 minute 'sort that out' spell. Geoff floated over too at 20' .... disappeared out of sight and I never saw him again.

A sweaty walk up, or rather more across, and I launched again ... heading east now, over a third wall and another landing. Now the wind was the other way. A slight walk up, launch and back west. The only question being could I get back to the car. It proved quite bouyant and I made the car with a 360 to spare. Geoff's car was gone!

That was plan A over, I packed headed home for some lunch and set about plan B.

Cotterside:  I'd walked the full Cotterside ridge during the winter as a scouting exercise -  sussed take off's a both ends - one for more SSE and the other SSW. I'd also looked in on the farms to check them out. Given the wind was SW I opted for the west end, parking just beyond the Moorcock Inn.

It's a pretty easy walk and dumping my sack at the (impressive) bridge I went along to OK things at the farm. All being good, "Just don't hurt yourself" .... I retraced to my sack and carried on up the bridleway witha huge following of friendly 'feed me' sheep.   Depending on the amount of wind there are various places to launch .... given it was quite light I went to the top step below the fellwall.

Not a lot of wind, but I gauged enough to soar and I was away.  Tracking east it became clear there was a lot of west in the wind.  It wasn't easy soaring .... a lot of scraping along edges, around clumps of trees and half way along I thought it wiser to turn back. The return was easier - slow, but I could finally get above the crags, the trees and look down on sheep. The wind limited me to the east end, until I got rather bored and headed slowly back towards the road.  There's a power cable at the foot of the hill but I cleared it by several hundred feet.

It's a nice place, good pub at the landing area, but it needs a better day to really test its potential.

A few pics. I did something to my settings so just a few.  LINK 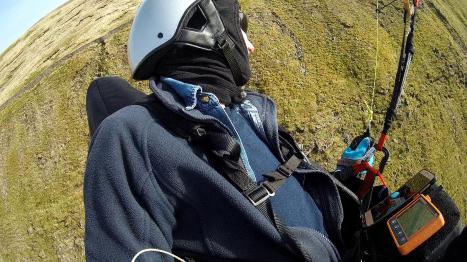 This could have a been a very short entry .... more sweating than flying!

The wind never cooperated .... either too light, too off the hill or too unreadable.

After several short airborne forays, some walking and much frustration the wind appeared to be switching back to the west. So I headed back to take off, landed below  it and walked back up. It was no better here ... in fact it now appeared nil wind to wafts of northerly.  It looked hard enough to just get off and fly down and so that became the pressing intention.

However, fate had other ideas. We got off across the slope, headed around onto the WNW face only to find it - WORKING!  You take what's given, even if very unexpected. Soon we had six gliders in the air and doing OK. We didn't exactly have a cake to put icing on, so we just took the icing.  It was nothing special, but it was FLYING ... something that had eluded us most of the day.

It provided about 30 minutes before the lift weakened and we headed down ... partially sated.  The rest was done at the newly opened Burnmoor Arms, where we set the world to rights in time honoured fashion.