A pleasant hour snatched from a spell of unsavoury weather.

I drove over to Hawes with a view to flying Baugh Fell ... the cloud was already covering the higher fells so optimism was quite low. As I looked west I could see I wouldn't have the time to walk up and fly Baugh as the cloud was already just above the tops; Cotterside too seemed unlikely as the wind at this stage was very west. In the end I settled for Stags - if only because of the short walk and because it was at least clear.

Parking squeezed between the boulders and I set off up.  There was lots of wave around, which was my main concern .... very low level stuff and whilst the wind was fine on take off the clouds above were suggesting more at height. So .... I settled for groundhandling for a spell before deciding to sample the ridge.  It proved nicely and safely soarable.

I enjoyed about an hour spread over four or five flights. All very nice but with one eye on the wind and another the ever lowering cloud. Eventually, whilst the wind stayed fine, the clouds now lowered onto the hill. I decided it could only get worse with rain not far off so called it a day.

At least it satisfied the rat.

LINK to a short video clip.

The video probably sums up the day well enough.

There were pilots out on various local sites and all seemed to have a reasonable time. The forecast had been for very light winds so finding a soarable hill was the main objective. I opted for Ingleborough bowl simply because it's five minutes drive from the house and if there's any wind the bowl usually collects it.  Walking up, well past midday, I wasn't sure, but eventually the sight of gliders flying the Magnet convinced me it would be OK. I deviated from the main track, to the north end of the bowl, the wind being more SSW than SW and came across about a dozen, very friendly tree planters from English Nature. A short chat and I carried on up .... going all the way to the top of the ridge as it was still only about 8mph and it was easier to layout than the steep slope  below.

Easy soaring conditions, very smooth although eventually the wind died a little until it became scratching along just above the ridge. Earlier it had been a lot better. After an hour or so the sight of a light shower off to the south ... and I was happy with the day, made me decide to head down to the Hill Inn.

Looking back I realised it was the day I'd wanted for Baugh Fell. Forecasts suggested a more W to SW ... for Baugh I needed a more SSW to S which is what I got. Maybe next time. 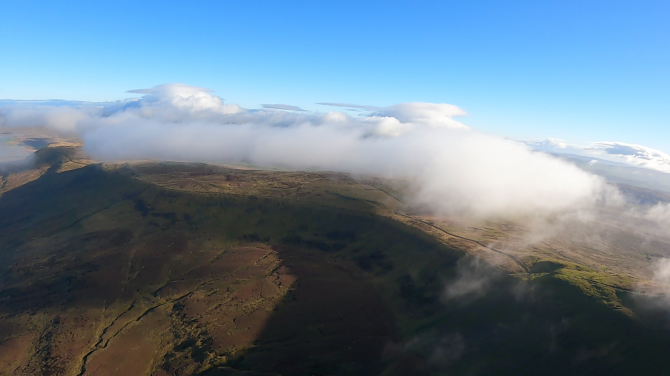 I only had the morning to play with, having to be back home by midday.  The morning dawned clear and sunny, the usual November cloud on the tops but with all the makings of a nice day. Having checked the forecasts, for once it seemed like the morning may be the better part of the day so I was out of the house before 9am.

I parked up at the Hill Inn surprised to find it wasn't the forecast flat calm - there was a fair northerly wind blowing down the dale. Ingleborough and Whernside still held their cloud cap but I was sure it would burn off - either way it wasn't a problem.  I set off up quite optimistic.

For once I took the middle route - fairly pathless and rather damp underfoot, aiming for the shallow col between Park and Simon's simply because it gave me more options for direction and good launch points.  As it happened the wind dictated that I found myself midway up the shallow slopes at the south end of Park - although light (ish it was on and seemed OK.

Just on finishing my prep two gliders appeared from the north spur - so, company in the form of Chris K and Kev. I'd thought I was on my lonesome as usual so it was a real, nice bonus to have two good pilots for shotgun.

Soon they gained height and headed south to Simon's. No long after I followed, the lift being  excellent and the wind light .... maybe a little more at height.  From there it was off to Ingleborough, sweetly draped in white fronds of drifting streams of cloud. We hung around there for a while, filming, shouting and generally enjoying the views which were amazing. Then I had to go - heading back out for the Hill Inn landing field and still finding lifting air - so it was a slow descent.  it didn't seem right to be heading down so soon but I had to go.

During packing it seemed the wave had weakened on the hill - still very soarable, just more normal ridge service resumed. All told a nice morning flight.

This is getting silly!  Four days flying during the past week - and it's November.

I hadn't really intended to go flying, the forecast wasn't great and frankly I was happy with a walk. All that changed driving up Chapel le Dale when I spotted, first one, then two gliders flying. A quick left at Chapel and I arrived to find parking at a premium - cars everywhere. So in the true spirit of, ...'What stupid sod parked there ....' I did my bit by blocking Liam in. If he wanted out it would only be to the nearest pub anyway so I was saving his liver.

I walked part-way up chatting with Dean until he veered off to gather his scattered clients. This may be Remembrance Sunday where  'age shall not weary them' which I chose not to put to the test by only going halfway up the hill .... and taking a chance I could soar the rest. It saved me precisely 54' before I sloped and wearied my way steeply up the rest. It was ..... a little on the light side, but not by much. Slope landings were very much in fashion ... and some even went below the wall. That was certainly beyond any call of my duty.

The day essentially split into three parts. The early pilots had a decent soaring spell .... despite only the southern, lower section of the  ridge being clear of cloud. It then went light .... scratchable, making it difficult and especially tough to get onto the main section of Whernside proper without landing. Things then improved and although the summit was possible it was into cloud to get there .... and more cloud flying to get back.  The consolation was the valley out front and back (Kingsdale) remained in bright sunshine. Work it out.

Finally, things changed, initially not for the better ... it got rougher! Those on the ridge reported strong gusts peaking into the mid 20's mph.  Of course that was only 'after' we'd top landed in what were then described as 'lulls'.  Sometimes ignorance is indeed bliss.

For a while we just para-waited .... told jokes, tall stories and and targeted Chris'  dress sense which Kev suggested you'd expect of a time traveller who'd got it slightly wrong.  The wind finally eased to 'nice' and we were all airborne again. The sun was now on the ridge, it even felt summer like. The summit was clear and as the wind came more SE (from ESE) the full length of the ridge was one, long easy soar.

I had the usual boat-about with no plan except to put in a shift. As people went into land I decided similar. It felt like it should be an easy into (a decent) wind landing ..... surprise, surprise it was flat calm, dead, nothing ..... fall over and eat grass. I swear I actually felt some tail wind.

After all that flying I think I'll enjoy doing nothing tomorrow before back to work on Tuesday. Tough life. 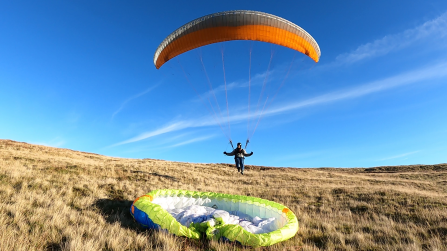 November is the month that keeps giving. A good turn-out with around a dozen pilots at different times.

I left the Hill Inn carpark just after 10am, with maybe three well ahead of me. A lovely, sunny morning after a frosty night,  so still a chill in the air and fairly windless. By the time I'd reached the foot of the bowl the light wind was more up than down the valley - opposite to what the forecast had led me to expect. As I panted up the final steep section of the bowl a blue glider appeared from the summit ... then promptly disappeared. I guessed it had landed above the bowl.

Once above the bowl it was nicely soarable ... but like the previous week only on the northern section. So, spotting others heading that way I did likewise.  Soon I encountered Simon and Roger, both laying out and keen to be away.  Sunny as it was it was going to be cold on the fingers!  I noticed they didn't last long!

A spot of videoing and I joined them. Smooth, lifty but after 15 minutes the fingers felt it so I landed to meet up with Chris and Kev. Bit of finger rubbing and from that point on my fingers were fine .... can't say the same for the wet feet. Chris suggested wellies and he may have a point.

For the next couple of hours we had great flying, always trying to get across to Ingleborough as the wind became increasingly WNW. Unfortunately halfway along the N face we kept being forced to turn back. Eventually I managed it. I expected it to work better than it did so after half a dozen beats up the cliffs I headed back to the bowl - then on to Park Fell.  As  we'd decided to make it our final flight we'd created an impromptu task .... hence Park Fell. Park was near impossible to get back from so I headed down and landed just above the limestone escarpments. Others soon followed back to the roadside field.  I think about eight gliders in total during the busy midday hours - so nice to have company.

A lovely day out. Nice once you got warmed up and well worth the walk. We finished off with coffee in Bernies.  A final quick run up to Ribblehead with Chris,  the sun rapidly setting, the light amazing, to have a quick chat with Kat as she emerged out the gloaming.