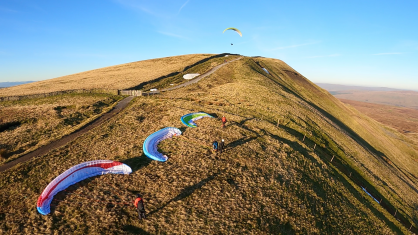 Just about the perfect pre- Christmas flight that I didn't really see coming. To cap it off I had a new Fusion to try - I am now on 'Fire' colours where previously I was Mr Oceanic.

It was, as expected, very light on the walk up - in fact it almost felt like a spring morning as the warm sun had me shedding clothes. All it needed was Whernside ridge to grab some wind as it tends to do.  A slightly different approach that gained me nothing as I still had to do the full grind to the top of the ridge.

It felt just about soarable so I rather rushed clipping on the new wing -  so much so I managed to clip the speedbar into the wrong risers. A not so good start.  It may have felt soarable but it didn't quite cut it and I had to slope land towards the craggy bit.  A short carry, a second try and this time the 'craggy bit' soared - after a fashion. Ten minutes later I was joined by an Alpina, plus chase cam, and then Dennis.

There wasn't much height to be had but I set off north for the main Whernside face (the wind was more E than SE) expecting the inevitable slope landing and carry .... I wasn't surprised to have a second ten minute flog up very steep grass. Now things were cooking. A better breeze and a better place - the main face worked, but from low down it took about a dozen agonising  beats to  break the skyline, the biggest problem being the sun on the southern leg.  Lots of glare to be getting too close to the ridge face.

Not long after, the long summit ridge was full of gliders - Dean had walked his students high. Cruel maybe, but it was definitely worth it and as the wind picked up a little and everyone enjoyed lots of smooth, spectacular flying.

Having had my days worth I set off down to try and minimise the condensation on a new wing.

Super day out .... and there may be a few more like it to come over the weekend.

I drove up Chapel le Dale not expecting to fly.  However, that all changed at Ribblehead which had a decent easterly breeze and Dave Southern's empty car meant I would have company.  A pleasant walk up in the sunshine and the higher I got the inversion became more visible .... always spectacular. Unfortunately, the wind died away to nothing.

On top I met Dave and Dennis, bemoaning the absence of wind - nothing, zilch, not even a zephyr.   I laid out .... waited but nothing improved so it became a forward launch to the bottom. The only thing of note was as I decended the wind increased - my landing was actually into a moderate easterly. I should have guessed earlier -  the inversion at work.

The way I look at it - I got out, had some solid exercise, saw lovely inversion-scapes and did a forward launch. The first in a long while. 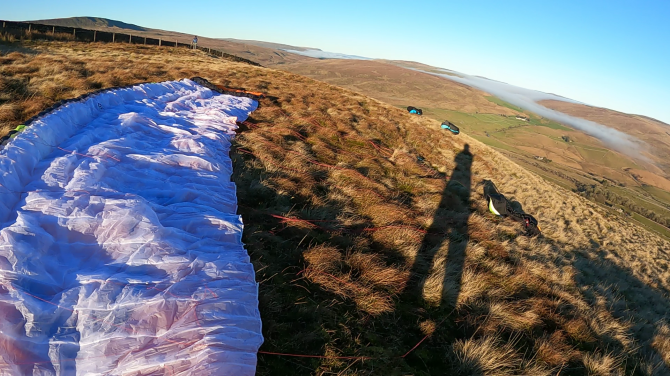