Work had got in the way the previous three days, but Thursday looked OK ... although no one seemed that excited by it.

I drove up Chapel le Dale, under full cloud cover with very little wind, but increasingly optimistic. To the west a very marked clearance was heading towards the Dales, and the Lakes were standing out crystal clear. My take was that the weather window was running a few hours late and my timing and site choice was about right. I heard briefly, before I lost signal, mention of Wether Fell .... but I've come to regard it as generally a poor choice amongst all the options for WNW/W ... too often grim and blown out.

By the time I was half way up the slope the sun was out, cumulus was appearing and the wind was nicely on the slope at about 8 mph and it felt soarable. I was soon away and climbing in lovely smooth lift. Up to this point I'd assumed I was on my own, but a glider showed 2k to the south, high above the bowl.  Company is always better. Building height I headed that way, but the distant glider became more distant, pushing forward and well away from the hill ...  lower and lower. Rather disappointed I carried on - my plan, given the whole ridge tends to work in WNW was to exploit the ridge and push the ends.

Rounding onto the WSW faces of Ingleborough I spotted a glider kiting the lower slopes before becoming airborne.  Aaah ..... the unmistakable Zeolite that could only mean Dean. At least I was now in very good company.

Dean climbed up towards the usual Ingleborough cloud whilst I pushed as far south as I dare - I could have gone further, but was in rather too much of a rush. A fast trip back north the wind now more westerly. At the north end it seemed more north so conveniently I had a fast trip on both legs. Arriving back at the south end the Ingleborough cloud gave me a climb to base (just short of 3000').  It also took me into cloud and although I wanted to go south the suck increased so I turned. For a while I dabbled with the idea of shooting off downwind - there were clouds, the ground fell away and it looked like the bonus final leg option on the end of my plan. Instead, I flew back north. Dean had followed a street out front that seemed to have some life in it - I headed for a cloud over Ribblehead. If it worked I was quids in, if not ... well, I'd done what I set out to do.

It didn't deliver very much ... so I just headed up the main road to the moors ... that offered nothing either so I landed and packed. Still --- a quality hour and a half.

Following some lunch back home and the 1pm News, I made my way around to Three Men. A number of the J36 were also heading that way too.  I arrived at 2:30pm, just as Geoff C was contemplating.  Although rather gusty at the cars and a bit stronger than we'd have liked we set off up the short walk. Getting to know the place we've discovered it can be no more windy on top than at the bottom sometimes.

With a different approach, and a different set of wind parameters we decided to launch around on the west face - one we've yet to really explore, but perhaps the bigger, better face in many respects.

After a straighforward take off in a moderate breeze I was soon high and for the next 30 minutes pushed further along the west face and further out than I'd done before - it worked superbly. What this would be like on a nice thermic day? Great potential. Others arrived on take off and decided it was by then too windy.

Between us Geoff and I explored the full ridge. We never went as far north as possible, conscious of the wind strength into the more shallow back bowl behind Great Coum. However, it seems as though it will soar OK on the right day.

Then, the usual extension right off the south end. At this point the wind strength became apparent and we  headed slowly forward to a landing in actually quite light winds. I had considered flying back home - it's not far over the back, but decided I may miss the beer debrief.

All in all .... a another great day, plenty of quality flying and all squeezed from a brief weather window ... and two pints of Loweswater in the Pheasant whilst Westie told us hike n fly tales. 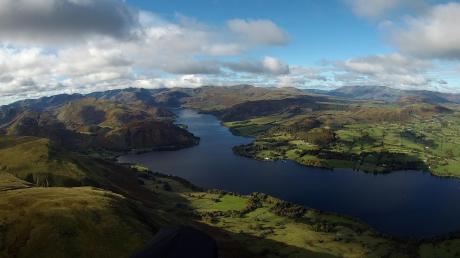 Tom and I met up shortly after 10am at the Helton carpark.  It was already busy with both pilots and lots of walkers - perfect day for both as it turned out. Initial thoughts were - it was breezy!  Then again, it often is by the cars, and it was still early.

We made the decision to walk in, if obviously blown out at the crossroads, then we turn back. But ... as often happens here, the wind eased and became almost light. We carried on.

Once on the hill I decided to use my usual lower take off. Tom carried on for the final five minutes and the top seemed to be OK. Still prefer my take off ... as I launched Rob C turned up and felt similar. Rounding onto the top a fair crowd had gathered ... a few laid out, a number mulling the conditions. For the first 30 minutes I had the hill  mostly to myself.

Once airborne I settled into the conditions, mostly quite smooth with occasional weakish climbs. In many ways, unsurprisingly given the airmass, (Polar Maritime) ... there were a few edges and it felt almost Springlike. Later it mellowed and the climbs weakened further. My plan (based on the hope the wind would do its usual and back to WNW) was to grab a few early turnpoints, pushing each end of the ridge, then use the backing wind to head towards High Street. From that point either to see of it was possible to connect onto the Frostwick/Ill Bell/Yoke ridge above Troutbeck ... then maybe Applethwaite Common? Or simply return from High Street if it didn't seem on to go further. But .... whilst it's good to have a plan, the wind had other ideas. base wasn't great, about 3200' asl ... but OK.

After waiting for an hour and half ... the wind actually veered to a more northerly direction, dashing the plan and subduing the lift on the hill. I decided with almost two and half hours airtime I was more than happy to call it a day and head down towards the cars.

It was just a glorious day to be out, stunning views. Whilst packing (slowly) i chatted with assorted passing pilots, Steve T arrived and we walked slowly to the cars. Also had an interesting chat with Rob C.  It all made for a great Autumn day - although I did miss the debrief pint.

A very pleasant couple of hours groundhandling with Richard and Sharon.  Despite the forecast being distinctly iffy it was actually OK and even the sun came out for a spell.

What a belter of an afternoon.

When Tom dropped a message just after midday I thought his optimism was in over-drive given the period of awful weather we've just had. But he was bang on ... he spotted the window and it worked to perfection.

I arrived first and initially thought it was surprisingly light at the cars - walking up confirmed there was plenty of wind so I opted for a low take off. Three Men seems to work from really low down.  For the first 45 minutes it was OK, but definitely on the breezy side .... every 15 minutes I'd head out, throw a slow 360 and check the speed and direction. Sure enough, as per the forecast it was easing. Dean took to the air from the track whilst Tom and Jonny carried on to the top to await the easing.  After an hour it seemed to have eased to a steady 12mph on top ... so I landed.  A short chat and off again for another hour.

The second flight was super smooth and even provided a cloud street out front that gave us a nice gain.  No one really seemed to be flying the ridge as the lift was pretty well out - so no scratching along to the south end - just easy, bouyant flying. Johnny headed off the end for Tow Scar.

With over two hours of flying to wind up the year and the sun getting low it was time to land.

A great afternoon on our favourite site.

VIDEO LINK (to a few bits) 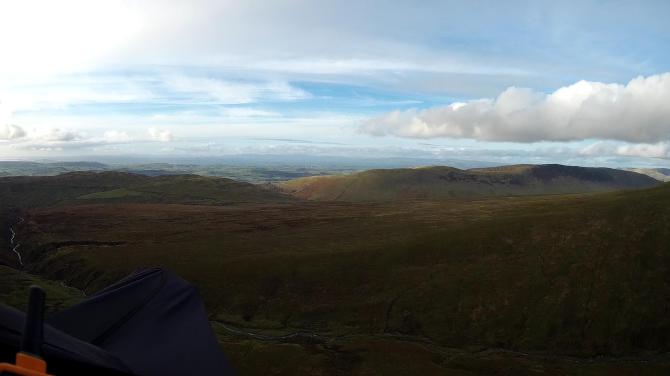 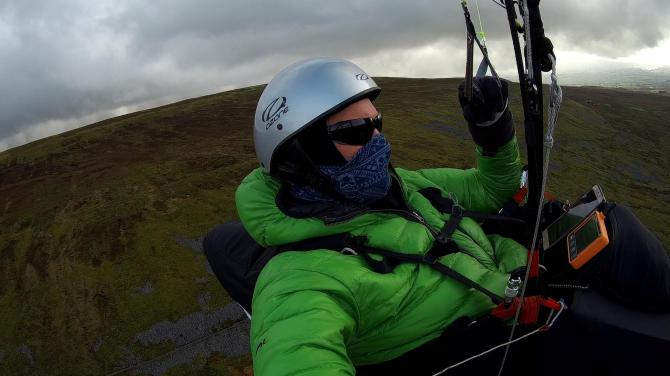