But it was worth the wait.

Geoff C and I headed up to Ribblehead and Park Fell in pleasant sunshine, passing the winter snowdrifts banking up along the walls as we climbed higher.  The wind was light - but sufficient ... in fact a firm snowdrift got me over the wall/fence onto the NE face and I was able to get away easily from half way up.

Geoff and I probably had the best of things. A 10 minute beating session and a juicy cloud out front came in and gave us lift off. So good to be back in the thermalling groove again and together we headed upwards to base. Geoff set off south towards Simon's whilst I followed five minutes later. Over on Simon's a couple of wings were laid out ... and not long after got airborne.

I headed back to Park (Geoff had a soaring session on Simon's to gain height to get back) ... and with a new Forza I had a few adjustments to make. Geoff Y appeared at take off, and shortly after that, Tam.  I had a number of short flights but the wind was starting to turn more NNE so Geoff Y and Tam probably only caught the tail end of the day, more's the pity.

A brief thermalling session on the way down and I landed quite pleased with the day.

Still, a really nice and very useful day when both Geoff C and I had new wings/ harnesses to try out. Finished with chip butties in Inglesport cafe. 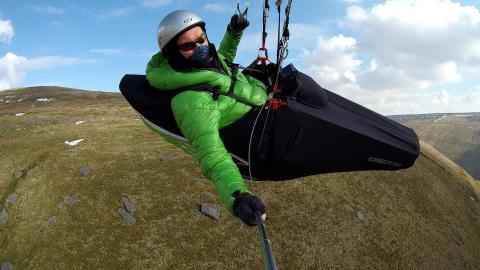 I headed over with John Hamlett; the Geoff's following on behind with a  few other J36 er's going to Far Whitestones. Later a lot of the usual Dales crowd turned up too - Pete and Rosie, Joseph, Neil etc. In total we had around a dozen ....never too crowded, but plenty of pilots to sample the spring air.

John and I were first on the hill ... for a while it was light. Brantside often starts slowly which can be a bit frustrating. Finally, around 12.45 it got going, or at least it was soarable ... the proper thermals you still have to wait for.  Several flights later, and after a rather scratchy, fraught period the lift off came (for me at a least) ... and I managed to climb out in a nice steady thermal. Disappointingly, it weakened and broke up just short of base so after a little hunting I pressed on. There was little obvious to head for so I chose the wisps ... which never really formed into anything of note.  Out over Hawes ... very blue so I expected nothing and got even less with considerable sink adding to my woes.

I landed out on a patch of nice dry ground the right side of the river and walked into the Creamery for coffee. Just in time as it turned out ... it shuts at 3.30pm in winter.

A short xc, but the first of the season. 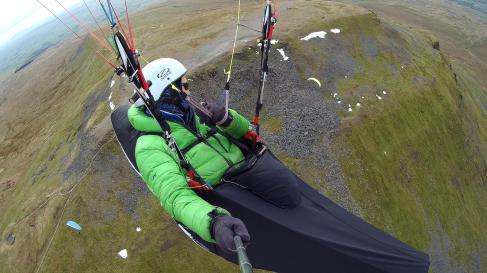 For however long it takes, COV 19 will have a significant impact on the flying ... so no real xc adventures.

I took my favourite walk  up for Ingleborough - 40 mins to take off if you need to go to the very top (of Park Fell).  By half way it was T-shirts time, the first this year - the sun was out and warm, the sky looked great but the wind direction had yet to settle and blow with any strength.  It was light on top - so no rush. I laid out, messed around and lazed in the sun for a snooze ... boredom was also, no doubt, responsible for a video sitrep.  Finally, a bit of wind came through part of a big attendant cloud above. I managed a short 10 minutes, a little thermalling in weak dribs n drabs before top landing and regaining the snooze position.

There were about 10 gliders over on  Ingleborough summit, more seemed to be happening there with flurries of activity that got them above the summit .... but often dropped them well below and a few went down. My occasional attempts met with little success, but Park Fell has the bonus of easy slope landings.

Although the day remained bright and very pleasant, the cumulus gave way to high cloud and I wasn't that hopeful - there was a touch more wind but the thermal activity seemed on the decline. How wrong can you be.  Sometime, well after 2pm, I took off not expecting much more than some soaring. By the end of half a dozen beats a decent thermal started forming .... there was very little drift so I casually followed it more or less along the ridge to the south. There were a number of gliders laid out above the bowl ... and either encouraged by a glider floating by at height, or more likely it had started to switch on there too, they all took off.

For a very pleasant spell we all soared and thermalled around the summit, then I set off back with a yearning for a coffee at the Ribblehead butty-van ... and some nagging guilt! The lift was very smooth and very consistent - even though on 3/4 bar for a lot of the way I was in constant light  lift and added a further 500' before the viaduct.  A short spell of wanging and I landed very nicely by the van on a lovely clean, dry area of grass.  I probably should /could have enjoyed the flying for longer, but messages banged around some of my whatsapp groups to the effect that anyone flying was both selfish and irresponsible given the pandemic. Those messages rather took the edge off things .... was I selfish and irresponsible?

A really nice day out with some excellent flying, nice coffee (plus cake) and a long chat with Chris to top the day off.

On the 23rd March the whole UK went into Cov 19 lockdown. Duration unknown!