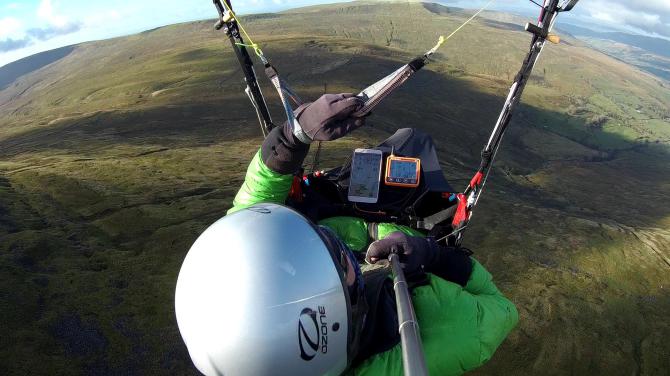 The forecast looked good, but you never know for sure until you've sampled it. Cloudbase was no great shakes, but at least above the tops with plenty of sunshine, whilst the NW wind looked more on the light side. Everything went pretty much to plan with the forecast, althought the wind didn't cooperate by going more west later.

Several options ... I was in two minds between Park Fell and Whernside, the latter is far more flexible when it comes to possible wind shifts. Dodd? A maybe .... Wether? Bottom of the pile for a number of reasons.

I arrived at the parking before Tom S and it looked OK, a bit northish ... but that's usual here. Walking up confirmed it was swinging increasingly onto the hill so it was just a case of picking one of the many grassy take off ledges below the top.  Tom arrived as I was about to layout and everything looked good - wind on the slope, 10mph and pretty much ideal.

Tom videoed my take off ... and soon I was climbing in wonderfully smooth air. Ten minutes later Tom was away too and climbing up to meet me.  Tom enjoyed over an hour whilst I had a just a little longer before my fingers felt the nip.  The wind always stayed fairly light, but it was very reliable ridge lift and towards the end a weak thermal or two ...I think we made base, Tom certainly did as he circled back towards the summit.  The only thing didn't go as planned, was the wind backing .... if anything it was NNW. It didn't stop 80% of the ridge working but prevented us getting to the far end tarns.

I'm flying with the Skytraxx 2.1 and one interesting feature is FANET. I hadn't given it much thought until two, then three gliders popped up on screen with their range, height, bearing and climb rate.  The closest was 13.8k away (Wether?) .... others 30k ish (Pendle?). Can't say who as it was as only their code showed. I never gave much thought to it before ... but a useful feature as I think more and more pilots will become EC enabled.

Finally, our flying appetite sated ... well, mine was. Tom is probably still at the REALLY keen stage. Perhaps I should have top landed and thawed out a bit .... there was still a few hours of flying left in the day.

Still, a great day out for November.