I hadn't intended to fly, but the sun shone from a near cloudless sky, the snow on the tops glistened and approaching midday it seemed almost pleasantly warm. I packed the wing with the view that you never know .... and if all else failed, it was a nice day for a walk.

I parked up outside the reserve and set off up Park Fell, very little wind but maybe with height it would appear - the few clouds suggested so at height.  Climbing the spur, the wind increased slightly, the snow deepened and the drifts and deeper snow appeared and slowed me down. Fortunately some kind soul  had broken trail.

I had intended to maybe get off on one of the steps on the spur, but in the end I went to the very top, through the drifted upgate and set up as normal.  It could have been really great - flying above the snowline with all of the three peaks in full winter rainment. Unfortunately, the wind had other ideas. it was still very light, not enough to soar and I felt it was going to slacken further.  So I took off excepting it was probably sled ride, if slowly, to the bottom. So it proved.

I packed in warm sun, not too disheartened by the short flight and decided the exercise was reward in itself.

Sunday morning dawned nothing like the previous day. Extensive cloud cover hung low over the hills and smoke rose vertically ..... breathless!  Still ... the forecast suggested some wind, a northerly, and it was worth a look without tempting others out on what could be a wasted trip.

I decided on Semer Water - there are few true northerlies and it doesn't (I've discovered) take much wind for it to work. So ... the plan was check out Ribblehead, then finally Newby Head and decide. At Newby Head the wind finally showed,  so above Hawes became the next decision point.  Interestingly it still looked OK, if a bit grim  ... so on to Semer itself.

Once parked up (on my own) ... I reckoned it was maybe too breezy, but not too bad and it was bang on. Minus the sack I walked onto the shoulder .... to be pleasantly surprised. The wind dropped away to maybe 10 mph at best and could not have been more square onto the hill. Back for the wing and during that short 15 minutes it dropped even further ... perhaps now only 8mph.

I walked the wing a little higher, just to allow a bomb-out  option on the shoulder and took off reasonably confident. The north face is steep and requires little to work ... and it delivered again. Within a beat I was over the top and looking towards the drop back onto what is, in effect,  the main ridge ... it's not that high in itself, a mere line of outcrops, but it's long. At 100' ato I headed over and made it easily. Then along the ridge, passing a soaring Buzzard who decided to follow. He was happy to share.

I enjoyed some very pleasant soaring in lovely smooth conditions until showers started coming down Wensleydale lowering the base. Eventually I headed back and landed, well pleased, on the shoulder near the car. A light shower passed through and I debated whether to have a second flight. Without company it was less fun so that was that for the day.  I didn't see much evidence of wave, something I always check for in winter - my theory is the width of Welsleydale and the nature/shape of the moors beyond tend to smooth it out. Basically, I don't expect nasty wave on this side of the valley.

It's surprising what you can grab from speculative half chances. 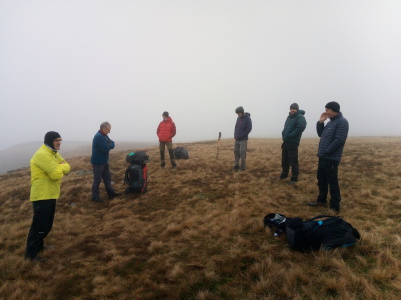 Tom and I walked up into the mist ... and kept walking. Optimism in the face of murky reality.

Others .... six to be precise, followed behind, determined not to miss out on whatever flying nirvana we should lead them to.  To cut a boring story very short, it became a long, misty para-catchup followed by a walk-down. I decided to launch into the white and fly-down whilst Tom went ahead casting the line and calling the fathoms. A brief moment of IFR using xctrack and I emerged into a world of extraordinary clarity.

To rub salt in the wound as we drove down Kingsdale.... the sun came out (a  bit) and looking back the hills seemed to be clearing into sharp relief. Probably an illusion. 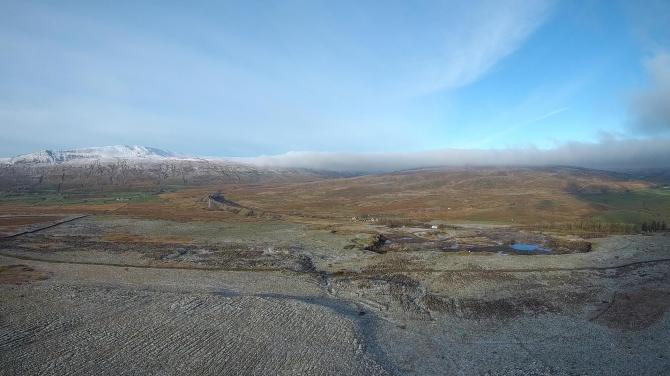 A rather futile walk up and flydown.

I'm getting rather used to taking off in cloud and flying down. Rather galling was to emerge from cloud only to find it was the the only piece of terrain hugging cloud for miles around.