A few of us dusted off our wings for some groundhandling on a remote private site. It went well, but we forgot the beer.

I checked out conditions at Ribblehead early - around 9am. It already seemed breezy, so given the forecast, I decided in a few hours it was likely to be blown out on Dodd/Wether.

However, a cup of tea later and having given it some thought, I reckoned JB was worth a look as it's only a short drive away. The J36 crew are lucky to have so many options on their doorstep.

Parked at the foot of the hill it was sunny, warm and breathless .... not a sniff of wind, but the windmills over Lambrigg showed a WNW to NW.  WNW is good for JB ... NW less so. I walked up expecting to hit wind, but by the time I arrived at take off it was still on the light side with just the first thermals gusts coming through. I gave it a shot but was forced to slope land at the north end of the hill - still too early.  By this time Geoff C was walking up whilst I was on the NW corner trying to stay up but each time having to slope land. Finally, I gave up and walked along to see Geoff. The sky I might add .... looked excellent.

Way off to the SW the Bay was starting to fill ... and that's a pretty good indicator the wind will back on the hill (to west in this case). It started to do so just as I approached Geoff. I had just enough time to video his take off before he was away and climbing slowly. Bugger! A rush back and gear up became urgent.

The thermals were now kicking in and together we took one of the first - the drift was quite slow. So where is all this wind? Whilst Geoff circled and climbed, I went looking for sink and found it in bucket loads - right down to a top landing. A bit of a wait whilst Geoff wafted high over the valley and then disappeared south. Meanwhile, I endured a lengthy scratchy period, including some  low stuff over the trees to the south. Then .... Geoff arrived back, got lowish found a climb and I pimped his find. From that point we were high ... and it was easy. Abundant thermals, some solid and strong. I debated .... so no xc?  Well, what about a flight home?  I set off ... downwind; Geoff upwind (to KL). Really nice flying .... very familair terrain, lots of thermals - many I just mashed through. Now .... I reckoned I could get to Settle - maybe Skipton. Would my driver pick me up .... nope, (it often ends with ... you got there, you get back!)

I arrived over Ingleton - home turf. Lots of lift around and the SB evident well to the south. There wasn't much else to do but film and try to wind down ... even at 500 ' workable lift kept appearing - which I ignored. I touched down behind the house in a gentle breeze.

Lovely flying, quite slow ... at height there wasn't much wind at all (about 10mph). Yet, 12 miles north it can rip through the centre of the Dales on days like these.

Above:  Flying the Flow Fusion

I underestimated the day. This was especially the case the further east you were, just into the better air and the abundant cumulus. Hence, Windbank seemed a good choice and right on the edge of where it got much better.

I arrived fairly early, but already there were lots parked up and as many again arrived later. A short chat with Dean and I walked up to take off - no one flying, but many hopefuls laid out.

It wasn't yet working, the wind was a bit off to the south and the thermals were still in their infancy. Eventually the keenest took off to confirm you could just about stay up on the weak and rather gusty thermals ... or be forced to slope land. Another 30 minutes passed and it seemed to be improving so I had my first 40 minute flight. It was OK ... better thermals, if slightly rough edged and as the cycle died away I chose to land and wait a little longer.

With things not really happening I launched again and headed north .... slowly going down to the point where slope landing became more problematic. At the point where things were getting a little desperate I contacted a strong, if rough climb. From that point on things became much easier and I was always able to stay high on the ridge. There had been good cumulus overhead, but slowly increasing amounts of blue sky approached from the west and the by now, beefy clouds were forming a distinct edge along Great Whernside and to the south. Time to move.

I shared a climb for part of the crossing to Great Whernside with Martin Baxter, before he either lost it, or decided to head back. The lift approaching the main cloudline (convergence?) was consistent, smooth and strong .... at last some proper thermals. Once in line with Great Whernside (although it looked superb downwind) ... I headed south along the cloud edge. A few k's south I approached a very healthy looking cloud that boomed me to base at 5,700' - I could have gone higher but elected to push on south in regular lift. All the thermal tracks indicated a due south at height ... always south and into a 20k headwind. Progess was slow.

Approaching Grassington I was still at 3500' but decided to run back up the valley to make sure I closed an FAI triangle of just ender 20k. Going any further wouldn't have extended it due to the 28% rule. I arrived back with plenty of height to find a busy ridge and lots of late afternoon lift, but the beer in my car was too tempting.

An excellent day .... more than I expected.

A poor morning, lots of wind, but forecast to give a decent late afternoon. Again.... I was a bit pessimistic, by mid afternoon it was breezy although the sky was very good. Without meaning to I fell asleep at my computer keyboard, woke an hour later only to see people flying Tow Scar from my window.

A quick dash around to Johnnies to find the J36 team split between those sat, deck chaired out and drinking - either thinking it too light, too late or too lazy to walk up. I nearly fell into the last category.  On take off were the rest ... not in any big rush so it seemed too light. Tim took off, then Baz .... then the rest. Light it seemed (in fact very light) .... but they stayed up and the air appeared very bouyant .... even though off to the south (never good here).

I waited for the mearest waft .... it was that light, but ... if they were staying up I thought there was a fair chance. It wasn't easy. The odd thermal gusts came through and you could just hang in there. Then even that seemed to switch off and people headed down. I was a long way towards joining them when something a bit better grabbed me ... a last a proper thermal - of sorts. It didn't last long but gave me the idea that if I could cross the valley towards the south face of Barkin it would be a good chance to see what was possible. Given the south in the wind it may work.

In truth I really needed another 300' to arrive at the higher east end ... as it was I just sneaked into the shallower west end (above the crags Tom S and I had walked three days earlier on our exploring walk - so I knew it well). This would be the acid test .... I scratched around for a while, but a combination of little wind, almost no thermal and it being frustratingly SW (right on the point) meant I couldn't get either the west or south face to work.

I gained a little height, just enough to sneak back over the valley (many big trees) and make it back to the road under Johnies.

We finished with beers - which was a very chilled way to finish the day. Sat in the warm sun under the hill, talking bollocks until the front approached, dulled out the sun and we set off for home. 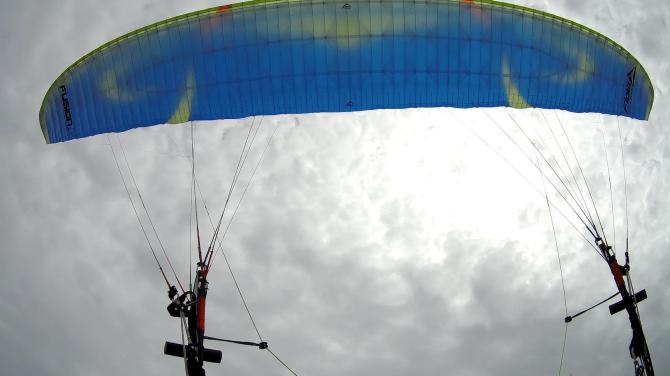 I arrived at take off to find many laid out but only two Zeno's flying (John E and Jake). It wasn't the most encouraging of days at this stage - rather windy, gusty, well off to the north and with lots of high cloud. Not quite the day RASP had predicted.

Eventually I laid out the wing, sorted a tricky knot and took off. I wasn't that bad in the air, fairly smooth, lifty and easy to get forward.  40 minutes later I landed - less than easy given the lifty slope.

Then the wind and the lift dropped off, resulting in a few scratchy flights - odd people going down .... but at least it brightened up a little. I then managed a fairly good flight ... caught a few thermals and generally had a good time. Jake, meanwhile, had hooked into a solid climb at the north end and was getting high. I chased into the bottom to find it a rough, sharp edged little mother and eventually decided we weren't compatable.  Later, as the lift dropped off I took the opportunity to land back and the cars and call it a day.

We then settled into the usual pattern of cracking the beer bottles and nattering. 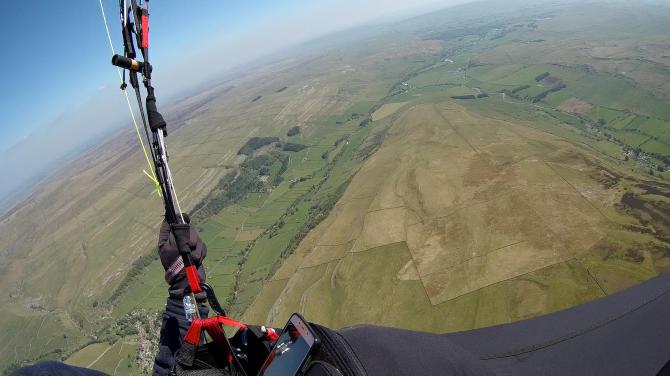 Hot! It was touching 25 degrees - with doesn't go well with sitting around togged up and waiting for the waft of a thermal. Early on Alex had been supported by seagulls and got up; later Dean managed the same trick with a corkscrewing Kite. For the rest of us it was hours of broilling sun.

Mid afternoon I was more encouraged by the site of a glider at least maintaining so joined in plus Rob Lund and shortly after Alex (who'd arrived back). In different ways we all got high - some higher than  others and then went in various directions so i have no idea what became of them. The sensible way was north - so I went south. I had a turnpoint down that way and felt (even though totally blue) that something would turn up. I lost a lot of height, found some impressive sink and ploughed on regardless. Off the end of the ridge I found lift, but it wasn't the corker I expected, merely a scrappy, half thermal that I slowly lost out in.

I was in two minds about top landing, or just going down and calling it a day - I didn't really fancy sitting in the hot sun again and at least the bottom held a beer. I half- heartedly went for the top landing .... probably at the worst time as it felt like a thermal was ripping through. I ploughed straight through into ... nothing so opted to just flt down.

Briefly met John Hamlet at the bottom, had beer and went home.