Having family and other commitments I had no intention of flying. Having packed my wing  away rather hurriedly and slightly damp last time out and being a warm sunny day I popped it in the car - the idea being I could lay it out someplace for 20 minutes and repack carefully.

By mid afternoon I was on my way back from Ulverston - I called in on Birkrigg Common, but the copious amounts of sheep droppings deterred me - so I carried on and gave up on the idea. However, It struck me that Brigsteer is fairly clean and as I was passing,  I headed there .... the wind seemed very south and very light so flying wasn't on my mind.

Arriving at a deserted Brigsteer it was a surprise to find it virtually perfect. How could I not fly .... it being the best way to dry out a wing. So .... 45 minutes of very smooth, pleasant soaring on a stunning October afternoon.

It had been a breezy morning and I'd given no thought to flying until Jacob's youthful optimism prompted me to look at the forecast. All forecast's agreed on the winds falling lighter about 2pm and a decent three hour window before they increased again. The only problem being they would back from SW to SE over that period - so which site? 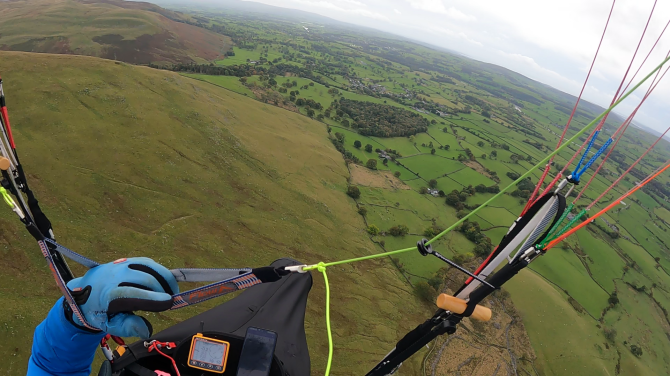 I opted for Middle Earth - it was close and I felt the western edge of the Dales would ease off first. It was also fairly blue, although high cloud was approaching from the west.

Throughout the walk-in I was optimistic ... the wind seemed OK, in fact more like WSW at this stage. Would it work in this direction? It was meant to back anyway. It was just before 2pm as I laid out low down, it seemed fine and there was a nice, into wind section, to work just above the bracken line. Not a lot to say really. It was lovely smooth flying, plenty of lift and it seems to work even better in WSW than SW/SSW so much so that the top end of the valley lifts well and flying over to Devil's Crag was easy, even going up the ridge towards Sedbergh seemed very possible.

The wind gradually died away, but remained soarable - and I landed in a light breeze near the stile for an easy walk back to the car at the Mousehole and coffee.  The more I fly the place the more I realise how good it is and the potential for a great xc start point.

Roll on next spring.

During the walk in I remarked that it seemed like a carbon copy of the superb October day we'd enjoyed exactly a year previous. In fact it turned out to be even better.

I'd posted a 30+k task to the group the night before as a focus ... essentially utilising the long ridge line given the consistent easterly forecast.  It's got to be spot on to really exploit the full ridge with some scratchy sections,  out of wind stretches and with both ends being 7k apart and overlooking different valley's, they're liable to work quite differently. In fact the thermals that kicked in after 1pm were consistently good, easy to work and base being a respectable 4000', it became fairly easy. An interesting task that gave me a good focus, and after a tricky, Great Coum section on the first out-run, it got easier.

I walked in with Tim, Dave and Baz - a glorious morning with only the 'stick' incident livening up procedings.  Not too many out, but on take off Ian Brindle, Sharon and Richard were about to launch.  Conditions could hardly have been better, a nice wind wind strength and the perfect direction. Not often you can say that.

A quick initial climb, a long hands-off, gloves off spell to start the tracker running, before a short push south 300m to tag the start then video the others taking off.  Judging it to be predictably soarable I headed north with barely a turn, occasionally low, but always confident it would work OK. Approaching the tricky  (into wind section) before Great Coum, I struggled  and back-tracked three times to a short working section to top up. Finally I made it into the Coum's large bowl.  I expected to get hoovered up here, but only the far end worked and then I was often below the top.  The pushed out to the next TP wasn't easy and meant returning half way down the bowl - but it worked after a fashion and got me level with the top, then just above with  enough height to head south again.

Thermals were now more organised, stronger and small clouds marked each climb. From this point I was able to stay high and en route to TP2 reached base at just over 4000' with Ian and Baz coming in below. RASP had suggested zero stars - in fact these were some the nicest climbs I'd met all year. There may have a been a degree of wave enhancement as upwind Whernside was disappointingly poor I was later told. I wonder what Barkin would have been like?

I re tagged (now TP2 (the original start cylinder) and again set off up the ridge with Tim not far behind. It was much easier now and with plenty of height I re-entered Great Coum and this time managed the TP easily. Then it got even easier as a good climb to 3500' meant retracing back south would be a doddle.  The goal cylinder was over home (Ingleton) usually far more than a glide away, but the clouds looked good that way so it proved very straightforward. I decided that would do for the day unless a strong climb to base came along, in which case I'd head downwind given the good drift and cloud development.  In the end I mooched around over Ingleton before landing.

I met up with the others shortly after for a de-brief in the Wheatsheaf.  One of the best days out this year .... very enjoyable.