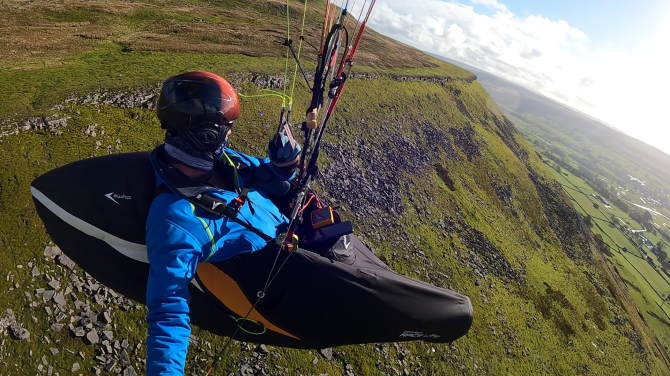 The previous day had been very wet, very windy and very dark .... in other words, stormy!

However, 24hrs can make all the difference.

The morning looked quite nice actually, sunny, pleasantly warm, with a light SSW breeze. It was worth a trip out. Site-wise it was one of those days where a number of sites would have worked fine. My first thought was maybe Baugh Fell for an adventure/explore, but the thought of a long, wet walk in deterred me. Then Cotterside - the perfect direction and strength but I'd certainly be on my own. So ... I settled on Stags thinking it was such an obvious choice there would be at least some company.  As it happened I had it all to myself.

I laid out at the west end with a light, occasionally 10mph breeze  and was soon in the air. A little scratchy at first, until it became apparent  there were actually thermals - not the strongest, but OK for November. And they got better as increasing cumulus developed.  In the end it became a really nice boat about for an hour  - rather regretting not going to Cotterside which is always better and a trip to Caperby via Nappa seemed possible given the conditions.

A really enjoyable bit of flying followed by a snack and coffee in Hawes.

It started as per the forecast .... frosty, blue with no wind. As I walked the track onto the west take at 10.45am everything seemed good and my thinking was for a short window of flying before it blew out as forecast. At this stage it was not quite soarable and I had a couple of slope landings near take off.

Eventually, just as others arrived, it became soarable - but only just and still the sun shone from a near cloudless sky.  Finally, it got working and I was able to gain a few hundred feet and take some video of Rob, Kev and Mark. It all seemed set good. 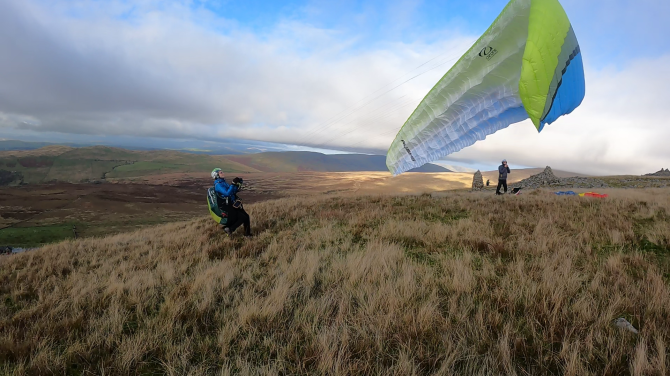 Finally we had a decent team with Jacob, Tim, Andy and Tom on take off.  However, the day was changing quickly. The cloud increased and lowered to touch Crag Hill whilst the distant Lakes now appeared clagged in.  Gone was the sun. and surprisingly the wind fell light ... quite the reverse of what we'd expected from the forecast. Having been fortunate to get some flyng in I was content to fly down .... rain was showing upwind and didn't seem more that 30 minutes away.

Within 20 minutes the rest slowly followed suit into the bottom field .... just as the first spots fell.

Then .... we had a debrief in the Royal Barn with Geoff and later Baz (with full Guiness) turning up to join us  - so quite a group. 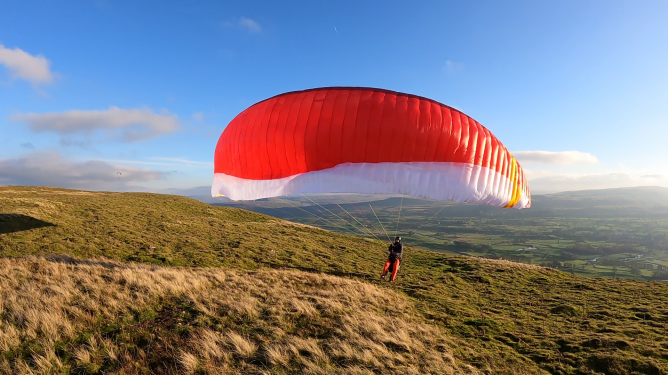 During the morning (and the previous day) there had been a lot of pessimism about - partly justified, that it would be too windy, too gusty and the clag would limit things. I wasn't so sure ... so we all met for coffee and eventually set off, with not a lot of hope towards Hawes. In fact over in Wensleydale  it would turn out to be a lovely afternoon of sunshine, light winds and plenty of smooth flying.

It was a decent direction for Stags, but would go a little more SE later ... a few of the others would go down the road to Cautley and that turned out OK too. The sun was out ... almost summer-like, but surprisingly the wind was on the light side.  A pattern developed where lengthy light periods cycled with flyable spells possibly as light wave came and went. Towards mid afternoon the condtions became more reliable.

About seven of us on the hill, so never busy and after satisfying the flying urge we headed for the Pantry. There was still an hour of flying left. A very pleasant afternoon.

A very short video of Tom's first flight on his new Mentor 7 light. Ideal conditions to test it out and he seemed very happy.

VIDEO LINK    This is an unlisted link so quite private.

Ayone who relies on weather forecasts knows they can be fickle things. Too often it seems the best predictions  go downhill at the final hurdle ... conversely, they can occasionally do the reverse.  This is not a tale of the latter ... or at least it got us to the top of the hill  before pulling the rug.

My bedroom window faces east so any sun catches my attention .... it did on this morning as my expectations were for gloom and maybe a patter of rain. A glance outside showed wall to wall sunshine, no wind and Ingleborough clear of cloud.  Things started to look interesting.

I was breakfasted and away by 9.30, heading for Barkin. Mark was already ahead of me with Rob and Andy just behind.  A lovely morning - until on the drive the first signs appeared of things going awry. The sky was filling in .. the sun reduced to patches and orographic was touching Crag Hill.  I didn't think a lack of wind would be a problem .... more a lack of visible hillside as turning up Barkindale, Barkin ridge now started to be attracting cloud.  Matters were starting to south rather fast.

Mark  had chosen his own parking - I assumed to lengthen the walk in.  He waited a few minutes until I caught up and we set off up the slope. The thing that struck me was how long his legs are ..... and I'm fairly tall. In the end I gave up. It was now a pretty grey day, orographic skirting the tops and barely a breath of wind. But wind was forecast so we continued.

Eventually, there were four of us on top with Pete M a distant fifth as he arrived later.  Then things became quite positive .... a gentle breeze sprang up, the cloud broke and the sun bathed the hill. In fact a lovely day to be out.  It's gonna get good - give it ten minutes.

So we did. and the wind died to nothing. We waited, but that didn't work. Eventually, we called it quits and flew down to a cloud covered bottom field. Driving away the sun broke through and the Lune valley looked quite lovely.

Oddly, I felt quite satisfied with the day and the effort made - it could have worked out.

Some video, just clips .... not for the flying, just a gambled morning in  November with mates.