15/1/2022  Windbank  Tom collected me and we drove over to Windbank. Although a pleasant enough day, we travelled more in hope than expectation for what would be the first flight of the year for both of us.  Reports varied widely, but mostly it was light everywhere (with a few notably exceptions).

We met Martin at the bottom, chatted a while and then walked up to find a smattering of pilots on top - all awaiting even just a breath of wind.  Laying out was a slow affair until increasing wind on the hill added a dose of urgency.  By the time I launched it was surprisingly good given the light breeze, with 100'ato possible.

Despite raised hopes it wasn't to be and the good spell lasted a mere 20 minutes, a quick blast up the ridge, before depositing people on the slopes and dying away to nothing - or even from the SE.

I gave up my launch attempts after Tom had flown down, packed and walked down as it seemed the quicker option.

But at least we flew. 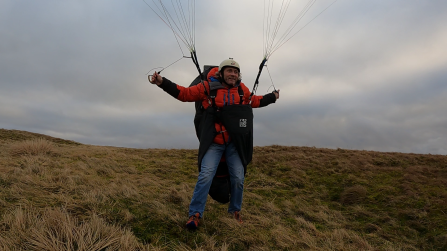 I'd given no thought to flying, the mist hung low on the slopes above Ingleton and it was gone 1.30pm. Having done a poor, rushed packing job the day before I thought I'd take a drive up to Ribblehead, maybe a spot of groundhandling if at all possible (there was little hint of any wind) and a decent repack.

Passing the hIll Inn it became apparent the hills were virtually clear, there were patches of blue sky and even some sun.  However, what caught my eye was a glider heading slowly south from Park Fell. Soon it landed on the slopes and as it dropped I could see it was Chris Kay. A change of plan saw me parking for a romp up Park. That changed after 30yds. It seemed too far off to the south and too light; I back-tracked to the car deciding Wether was the better choice.

As I approached Hawes there was no sign of any gliders, but within minutes one appeared. (Pete Morris) He seemed to be doing OK. At the roadhead it checked out fine, a nice breeze, so I opted to launch from there to save the walk/drive in. It also favoured the wind which was NW ish at this stage.

Passing launch a few more paragliders were laying out and two hangies.  Basically .... it was about as perfect as you could get for a winter's day. Very smooth, a lovely 10mph wind and It seemed possible to actually link to the NNW of Semer - although getting back would have been a problem.  As time passed the wind backed more to W, Several excellent flights later I landed back at the car, well pleased; it showed what you can get out of even a short winter day. 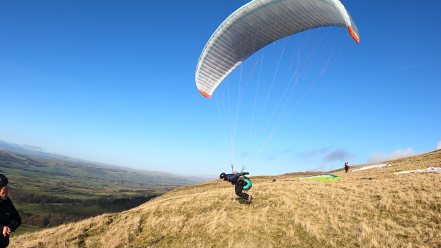 I'm not sure who made the call for JB, but it was a good one. The word went out and by the time I arrived to see Fred parking up, the skyline was dotted with hopeful pilots.  It wasn't yet soarable, but the sun was arriving slowly from the north and in fact it almost felt spring-like. It was certainly a lot warmer than the previous day.

On top the wind was alternating between not enough and barely enough - that of course didn't stop Chris Kay from repeatedly trying and ... almost soaring - but not quite. Along with Kev, Tom, Shed and Fred, we also got into the habit of trying. We managed short soaring sessions, but kept top landing as it dropped lighter. Then followed a spell where it went too light to bother - but it was nice in the sun and Kev initiated a 'build a pebble tower' game.

Tom's patience and family commitments gave way first and he took off for a slow ride down. That seemed to do the trick as conditions improved - they improved even further when Fred sacrificed himself too.  The remaining four of us then enjoyed a lengthy spell of good soaring, the best of the day, before having had our fill we bottom landed too in nil wind.  Later, Pete Morris walked up the north end and enjoyed a good 40 minutes as the evening drew in.

A very pleasant afternoon as it turned out - perhaps more than we expected.