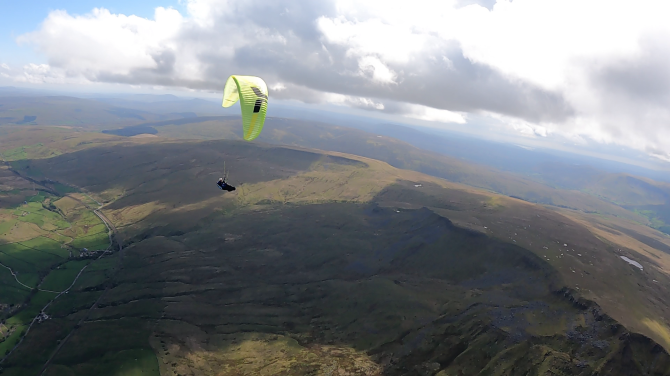 Above:  Mike on his shiny, new Zeno 2 (very pretty glider).

Today was a bit of a puzzler. I had a good day, but also good fortune in managing a really excellent 1hr. 30min spell and getting off at the right time.

Although forecast to have only moderate winds at best it turned out a lot windier than expected .... although that seemed confined to the lower winds.  We decided on Wild Boar given it was a consistent easterly. Tom (retrieve duty), Andy and Kat used the south end take off, whilst the adventurous took a punt with me and used the very north end. Not a lot of climbing ... but a longer walk in.

All the way up it remained windy, not blown out, but certainly top end. Having checked out  launch we retired to cower behind a wall. We did that for an hour, more arrived ... and yet more. Even a Zeno 2 pilot.

Eventually, I felt the wind had eased. High above Wild Boar, Pete Morris seemed to be flying OK and reported nice conditions and decent thermals.  Earlier Andy had gone over the back. We decided on a slightly lower take off point and the wind now seemed quite reasonable. An easy take off, smooth ridge lift and after a few beats I was heading south towards the summit of Wild Boar .... Mike and Ben would follow on shortly.  From this point we became a team of two halves .... one ground bound as the wind picked up and stayed that way; the other enjoying excellent flying.

I had about an hour and a half. The thermals were good, base easy to reach and Mike and I pushed out over the valley to the south. Mike pushed further, got low yet managed (as he does) to get out of trouble and back to base.  Mostly the flying was quite smooth aside from the odd rougher edged thermal, and it was easy to penetrate. The surprise was the sky seemed remarkably quiet for such a large gathering .... only later did I realise why. Base was around 4000', if you didn't mind some cloud flying. Downwind didn't look that great .... a mix of blue holes to overcast towards the Howgills. A better, downwind sky would really have given the day decent xc potential.

Eventually we headed back north, flew past take off and found weak lift in the blue.  Up to this point it had felt really nice .... until. Trying (slowly) to head back south ... thinking Moorcock, maybe a another climb to base and off downwind - the air changed. It became windy, turbulent and rather unpleasant. Mike and I landed near his car ... it was breezy but actually OK.

Later we all retired to the Fat Lamb ... some of us to celebrate some nice flying; others to recover from the disappointment of a long walk back down. 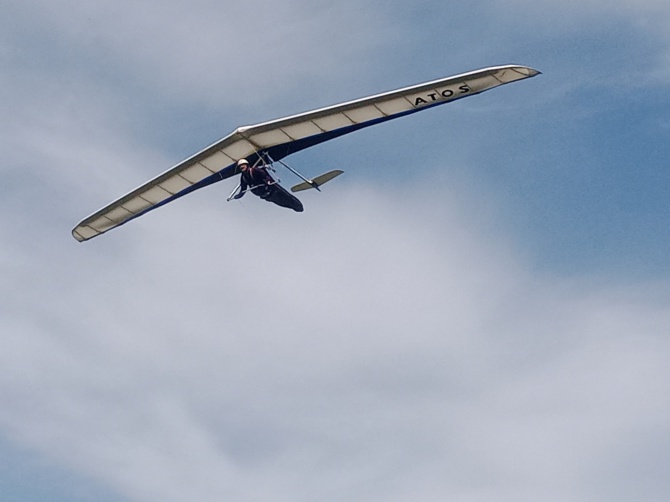 Above: Scratching with an Atos must be a more stressful affair.

Until I got over to Hawes I was undecided. The wind seemed OK, but more importantly it was a westerly. Given the day had a poor rasp, a low base (at this time) and poor visibility I thought there was more to be gained and more terrain to explore by seeing if Mallerstang was on.

I parked up at the bottom of Tailbridge (large parking bay) .... the wind was fine for a low launch (I'd recommend, the top has a strong compression, small, but hard rocks and an it will save you hours of parawaiting - in the air it's usually fine)  it's a great option here, but the top was likley to be strong for taking off.  Pete Morris was the only glider flying and seemed to be doing OK.  I had an easy take off in barely 10mph and was soon above the top. The first surprise was the number of hang gliders rigged up - about 10. I've never seen quite  so many for a long while. Meanwhile, near the road-end, another large group of cars and parawaiters was scattered about.  Good social separation .... almost two very different tribes.

I had  about 45 minutes. It was OK, but rather bouncy in broken disorganised thermals and whilst quite flyable it was probably not for the less experienced to feel comfortable.  Finally, I landed low by Pete and Liam, and we chatted for a while. The day was looking a lot better by 2pm, still a blue sky, but lots of sun and the visibility had improved hugely. In fact a nice summers day was developing. A few gliders (pg and hg) took to the air and it was time to sample conditions again. Oddly, the hang gliders seemed to struggle more in the conditions ... small tight thermals maybe.

It was still a bit spicey, but the thermals were now bigger and more organised, with solid climbs were to be had.  I climbed out with an xcracer (Kevin Lee?) and we both made the first, long transition onto Mallerstang.   For me it was quite easy having the extra 500' ... the xcracer resorted to the slopes/edges for a spell but was soon also well above the top.  We flew to the south end in abundant lift .... strong climbs, beefy surges. but increasingly nicer air. The day was improving all the time.

I wasn't quite sure what to do - so at the 8k mark turned and headed back, a simple climb and glide. I climbed again in front of Tailbridge and pushed north for a few k's until I ran back to the hill. The climbs were really good  now, and gliders were getting high. OK .... so let's do it all again. This time I headed across to Mallerstang with Pete Morris and together we worked our way to the south end. A couple of good climbs separated us at this point ..... Pete reaching about 4000' over the back slightly whilst I managed 3700' before pushing further south than the previous time.  The temptation was to follow a climb and head back over the high moors towards the back of Stags, the drift was good, the thermals strong and it would be interesting to see just what would happen - given it was a blue day and hard to read. Oh for a following driver as it did  auger well for climbs off the moors.

At this point the thought of a retrieve (and I currently have a sore knee excuse) .... means getting back to Tailbridge is no simple matter.  Again I turned and headed back north  to my previous turnpoint. Glancing down on the lower slopes passing World's End it was evident the transition across (not easy) had downed quite a few. I think I spotted a half-naked Laim sunbathing on a grassy knoll.

I was satisfied,  .... and given the day had held little promise I'd had 3 hrs of pretty good flying.  By the time I arrived back at Tailbridge the conditions could only be described as perfect.  Lots in the air; the evening was quite superb .... the Lakes visible in the distance and the flying looked very relaxing.  So I treated myself to a pint in Nateby.

When I find out what happened to Liam I'll add a short postscript.

A few stills - it wasn't really a day for videoing     LINK

If xc flying (or even just flying)  is your passion - then stay in the south. Currently northern pilots  are enduring a lengthy, windy spell ... with another week to come. In the north, as they say, it's grim!  We snatch at what we can get, early or late, whenever the opportunity arises.

Today was typical. Whilst 100k+ flights were the norm from Bradwell, Llangorse or the Mynd we fed off gusty scraps then into the late evening for the lull. Parlick, being just a little further south, provided an afternoon of rodeo entertainment as the afternoon sea breeze rolled in, killed off most of the thermals but left the fiesty ones.  I arrived at 2.30pm  to find a few, fairly stationary gliders, and pondered the value of a walk up .... or not. Paul Winterbottom arrived ... and being keener set off up. Shortly after Jim Ashley ... another chat, a walk into the field to see Tom and Andy land. The clincher arrived when Phil Wallbank  offered Jim and I a lift to the roadhead. So the die was cast and we set off up, bemoaning the cost of fuel, houses and a loaf of bread.

The wind was actually OK (below the wall) and take off no problem as a growing gathering  of pilots formed.  As at Tailbridge it never ceases to amaze me the number that will sit at the top of the hill, in the venturi and never think of the easier alternatives.  I flew for about an hour and a half.  It was not bad at all and even some decent thermals gave a 1000'  over the hill. Penetration was never an issue, no more than the usual Parlick day.

I landed in a gentle breeze, packed and read my messages. Team Geoffrey/Tom et al was going for a 6.30pm start on Three Men. As it's on the way home I thought why not ... I can even admire Geoff's new Weighless harness, even if he won't let me touch it without hand sanitiser.

I pulled into a full car park at 6.30pm on the dot ... already half a dozen were laid out on the hill about the mid point. Good ... a shorter walk.  Already there were signs of the wind dropping towards perfect ... with a hint that things could get lighter, so I didn't hang about.

I laid out where the others had, although the decreasing  wind meant they had balled and carried higher. Still ... I got to see the Weightless  -  I could touch, but only after promising to washing my hands.   As the photo below illustrates it can also double up as a tent or a fancy dress outfit (the Elephant Man?). It does grab attention before it morphs into a butterfly. 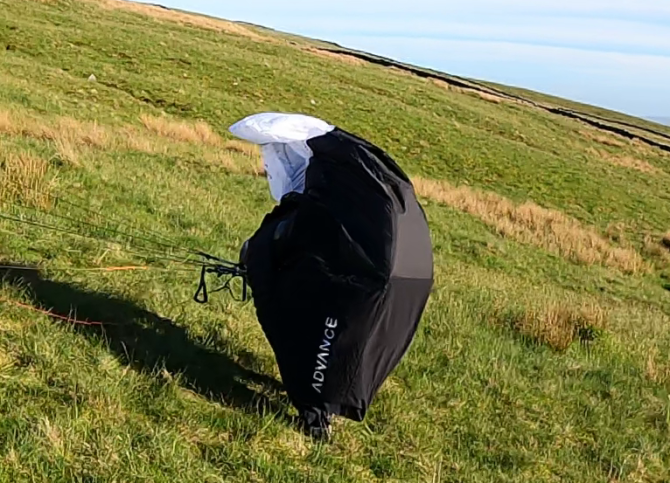 The flying?  Very pleasant ... it fed everyones rat. I even recall one half decent thermal until it became a low-level soaring session where very blade of grass and patch of scree was closely inspected.  As dusk fell to a lovely evening we packed and set off for some excellent beer in the Royal Barn.

In the end a very jolly day, but how long until the next? Southerner's - try a day in the north if you wish to test your skill and resolve.