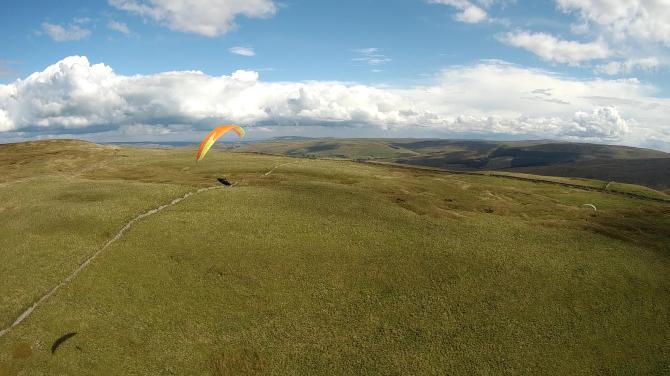 There was plenty of flying to be had, but the cloudbase was not that high and all round the sky had the look of overdevelopment tending towards big showers.  Surprisingly I got over to Dodd fairly easily without the usual recourse to lots of height for the crossing. The wind being off to the north maybe helped.

Once on Dodd the wind being off meant only Grove Head was really working - and not very well as it shaded in. Later the wind came a little more on and a bit of sun appeared allowing a low level float back to Wether. 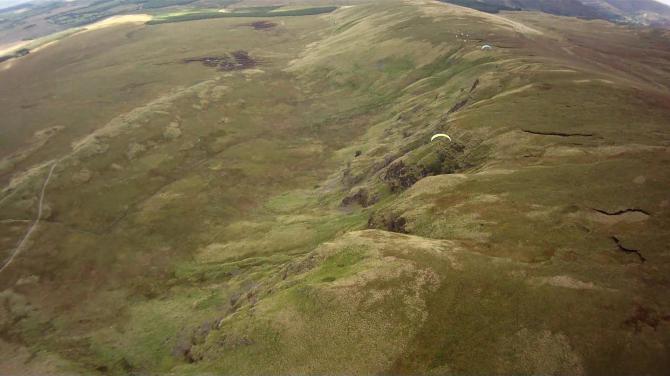 The weather looked set for northerlies for two straight weekend days so it seemed worth pre setting a Cumbria Cup task and leaving people to it. The task being a small FAI triangle comprising the far end of the main ridge, Dodd summit and then over to Clough and back to the start cylinder.

I was thr first to arrive, which surprised me given the decent forecast and the dearth of flying recently. A quick hike to take and and all seemed good - wind bang on and a nice steady 10mph. I took off and only then noted all the others walking up below and round the back.

I had a good fly around, worked out there were some thermals and plently of good ridge lift. I then flew the task but took rather a long time ... later, chased by Richard we halved the time to about 22 mins with no hanging about.

It was good until about 2.30pm when the forecast showers started to encroach a bit too close, so we called it a day and landed back at the cars. A pleasant few hours nevertheless. 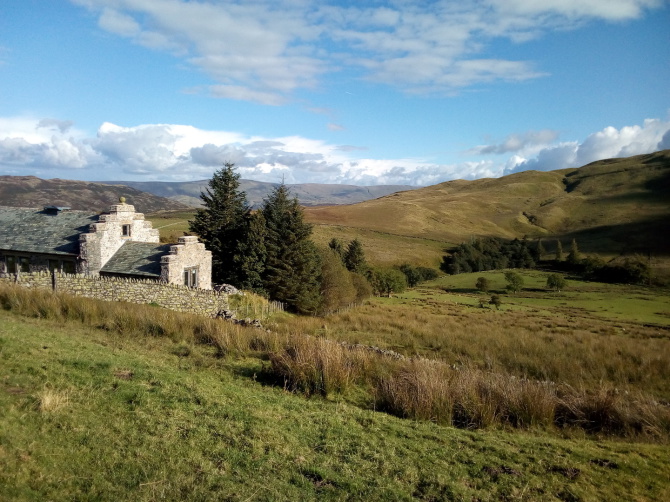 Landing after a short xc around the fells behind Wolf at the end of the day. Lovely, sunny, light wind day.

Initially, it was to be a DHPC coaching day, but the lack of enthusiasm from pilots and unsuitability of the Dales given the forecast meant I headed back north into the Lakes. Alex Pealing took up the invite to come along and explore further afield and Dave Southern joined us.

I arrived at the same time as the previous day .... a lovely sunny drive up to find it soarable, wind on, but almost clagged in and getting worse. Some persevered with the cloud but most sat it out. At 1.15pm the strip of sun out front crept towards us and the cloud started to lift (shortlived?).  First the crags appeared, then Clough Head, until only Dodd held a cloud cap. Many were soon in the air enjoying the excellent lift and increasingly warm, sunny afternoon.

The first pilots checked out Clough and then eventually went for the slopes below Dodd. The task was again underway. having done it the previous day I was content to just mess around between Clough and Wolf. Later as the conditions got even better and the final tops cleared of the cloud and the  the sun being out I couldn't resist so went for a blast around .... 24 minutes; Bud did it in just over 20. Fast!

Later I went back up to Dodd and messed (lovely colours with the grass and heather) around before heading over into Watermillock and flying Birkett Fell. It would have been failry easy to keep heading south on all the north faces into Patterdale, but instead just headed out to land near the cars.

A poor day that turned into a lovely day, Good to be out. 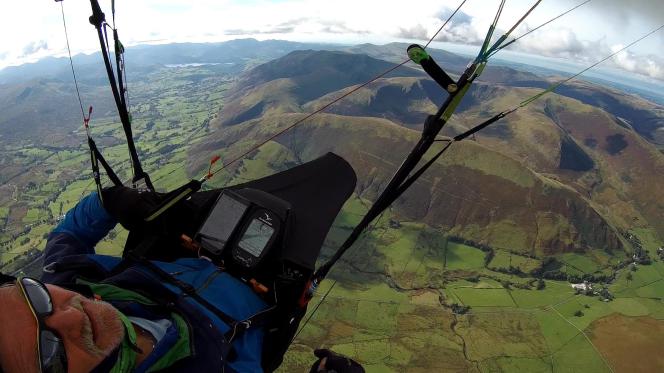 It was surprisingly quiet on social media, given that this was the best looking day for ages.  I'd worked the previously three days which, although flyable had been very hazy and uninspiring. Today, Thursday was different ... a good, clean airmass, a light breeze and even a reasonable base.

I umm'd and aah'd a bit, then decided Jenkin was the best bet. Given the wind direction I figured a higher base and more sun than further south. The forecast suggested the wind may back a little, from SSW to SSE which suited a triangle so I plugged in the usual one for this area. As it turned out, it could have worked OK, but by that time I was onto plan B.

I arrived to find a perfect Jenkin day, warm with a superb looking sky - a classic Lakes day to be out. It seemed others didn't think the same as the place appeared devoid of wings - the north Lakes seems a lot quieter than it used to. I walked up to a low take off and only then spotted two gliders laid out about 50' higher - Steve E and Ali W. At least some company.

The next hour was easy soaring with some decent thermals thrown in to get to about 3500' asl.  I tagged my first tp near Skiddaw and set off east towards Blease. The wind was still too far west, not a lot, so it looked on soarable on Blease, if slightly off. Arriving, I spotted a Hook 3 laid out, who soon took off - later Steve and Ali got tempted over. Then - we all decided that it was better back on Jenkin. Getting back could have been awkward, but actually proved OK.

Steve and Ali went back to their original  Lorton valley plan - Ali did quite well out front, but could not make it past the Flightpark on the A66. My view was the clouds were dying to the west and a lot beefier to the east - so set off back towards Blencathra. If it didn't work, then what the hell!.

Arriving at Blease I got a really good climb up to cloudbase, so at least a good start made. I carried on east, tagged the second tp but was now more interested in a good street setting up towards Carlisle. The first decent cloud was well east of Souther and south of the A66 - a long glide away, but I was now in,  'give  it a go' mood.

It took a big height loss to finally get in what I felt was the right place - I noted 1600' asl. It was bitty at first, but soon gave full turns, even if it was weak. At 1800asl I was established and finding better cores. It strengthened with height until I topped out at about 3700' asl.  Surprisingly, the previous good drift had slowed the further east I went. Light wind thermalling when I would have preferred some drift.

Established under the street the possibilities for late September intrigued. Whilst Ali pestered Steve on the radio for a coffee shop break, I now had the bit between my teeth for something better.  I pushed on downwind aiming for a forested area with some harvested parts (always seem to work) with a darker cloud above. At 1500' asl, not a lot of height loss getting there, I got another good, solid 2m climb - in fact it made me over optimistic. It was now gone 3pm, the street looked good and I set off passing to the west of Skelton. In retrospect It would have been wiser to take the climb further than 3700'asl, use the drift and take it into cloud. But confidence comes before the fall. Having left the climb too early I duly met the sink ... but worst of all was the sight of the street disintegrating before my eyes. Literally within minutes it fell apart to leave only scattered remnants dotting a blue sky and nothing to aim for but a brown, ploughed field that was unlikely to work. It didn't!

I landed near Ivesgill. Not a bad place to walk the odd mile on a warm, summer afternoon to the M6 services at Southwaite and a pickup.

One of the best September days I've had for years.

Stills from the video clips