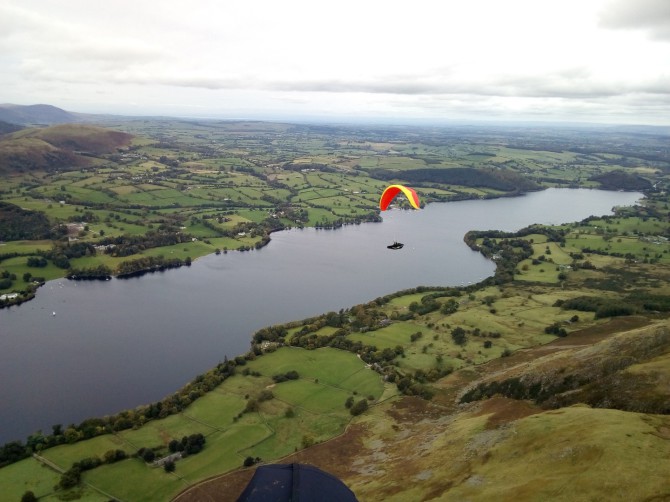 Geoff C and maiden flight of his Zeno

This was the first of several October attempts to link Sour Hows with Barton as an OR.

With Geoff collecting his shiny new Zeno from S&W I got onto Barton early. I took a new approach from the back of the hill figuring it may be a shorter drive. It is ... but the flat walk in still takes about an hour. At the car it seemed blown out ... but I pressed on thinking it would ease as the narrow col passed through. In fact it died to very light by the time I reached the hill.

Two flights that both ended with a slope landing, the second resulting in a steep and relentless flog back to the top.  Again, it was light on top but felt a little better and was more into the now west wind. This time it worked fine and I soon climbed away and set off south to Rampsgill Head.

Entering into the craggy bowl of Rampsgill it got rougher and rougher and it was soon apparent that a more southerly wind was spilling in from Hayeswater and making it too  rotory to continue on towards High Street. A easy fly back to Barton to see people flying and Geoff in striking red and Yellow emerging going south. OK ... let's do it all again. So, I set off after him. Again Rampsgill was not having any of it, if anything it was worse. So back towards Barton we went. After a decent climb, Geoff meandered out into the valley whilst I headed towards Barton with a view to the cars and keeping my feet dry (a wet walk in). A long glide but the cars were easily reached; Geoff arriving shortly after (plus Geoff Y).

Quite a pleasant few hours marred only by that gruelling flog up the front of Barton and a wind that spoiled the plan. 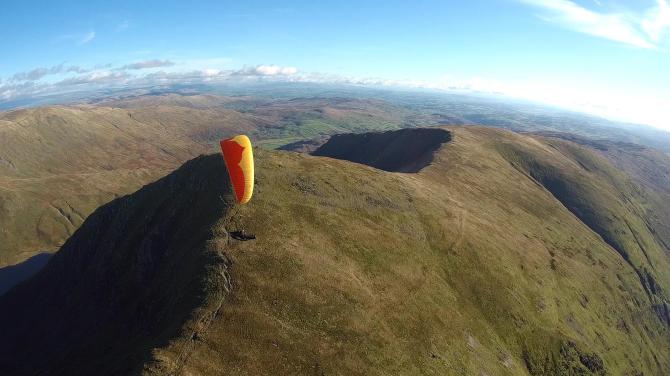 The night before we had a plan, the same as we'd had before given a west wind - to link Barton with Sour Hows with a declared  OR. Again to use Barton as the start point, but things changed.  I rather unilaterally decided to go from the south end using Troutbeck as the start ... it just seemed less hassle.

By the morning we were dithering a little. The Dales was mentioned but I felt it could blow out ... it wasn't forecast strong, but it often ends up that way and above all, convenient though it was it couldn't really do justice to the stunning scenery the Lakes would offer on such a day.  Initially it looked like just me on my lonesome on Troutbeck - it doesn't get flown that often. But both Geoff's were up for it and so off we trundled. We arrived to find a day that was simply mind-blowingly beautiful ... in warm sunshine and with little wind we walked up to the very top (only about 40 mins),  convinced some wind would arrive by 12pm as forecast.

On top the wind remained light, but worse it was off to the south. As we waited, not entirely convinced it would back, others steadily arrived until about a dozen were laying out, chatting and enjoying the scenery. Just after 1.30pm the wind started to come more onto the hill - enough to give it a go. It was a bit scratchy at first but the odd bit of thermal lift allowed me to dare to set off on the long, shallow crossing towards Yoke and the big ridge line to the north (Ill Bell amd Frostwick)  It worked fine ... little height loss, a bit of scratching up a bump in the shallow hillside and I was onto the back of Yoke and climbing well. Geoff had headed back to tag his start cylinder (I hadn't bothered to reverse my route from the previous Barton flight) - about 15 minutes later I watched him coming north using similar tactics. Later Tim Oliver joined us too.

Sadly, the rest of the pack stayed down near the take off area whilst we had a magnificent bit of flying in spectacular scenery on a day you can only dream of. The hillsides looked a picture, the wind light, the lift good and even late October thermals to take us over 3000' asl. As the sun dropped towards the west the sharp contrast with spreading shadows was amazing - what a place to be on such a day. And it was even warm up there.

Then, with all the exploring done, and deciding that although Barton was on but having no retrieve sorted if we didn't make it back, we decided to leave it for another day, a last look at High Street and we headed south towards take off and the landing  field.

A great day out. We heard tales later of a paraglider being seen thermalling over Windermere, then heading  east. It turned out to be Dave Thomson from the Borders with Alastair Tytler xc ing from Clough Head. Looks like they had a great day too.