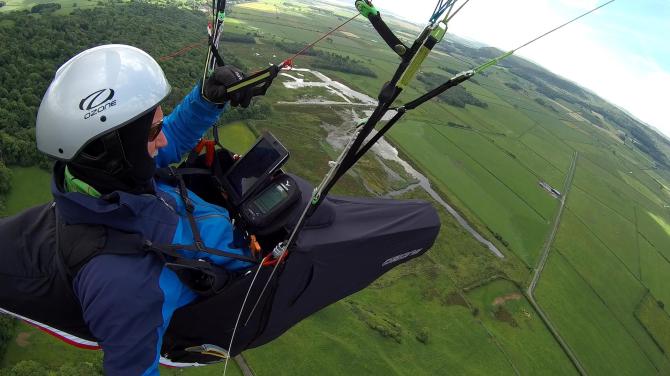 I arrived about 12, later than expected as I didn't think it would be flyable, given the wind. The sky looked quite promising but it was to get really good. As I got out of the car, Kitt and Richard Jennings were already leaving and touching cloudbase. The wind actually seemed fresh, but OK and there were  decent lulls. Take off was one of the easiest and the climb out instantaneous and fairly smooth ..... in fact the whole flight, although obviously windy at height, was smooth.

I didn't fly for long, I was on my own and concerned about the windspeed on top of the hill for landing. After 30 minutes I landed to find it as usual fine on the top - it usually is. But it was quite fresh!

I went to Asda for fuel and shopping and then back to the hill. By this stage it was a 100k sky, but again there was no one there. The wind had mellowed out but despite thinking I should fly, I talked myself out of it. Had we had a group of us I can't help thinking  it would have been one of the really great days ..... and the flights looong.  A day in retrospect that would have given twice the distance for half the time ........ it really became that good.

Got to try my third new action cam in as many months - superb, at last one I am really happy with. 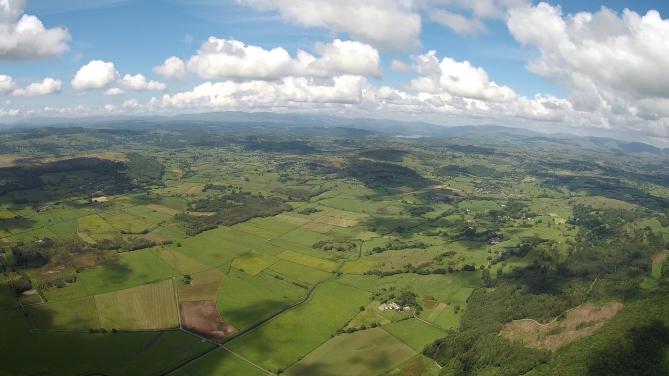 A dry May leads into a soggy June ........ looking ahead appears equally poor.

An hour's flight snatched at the end of another windy day. I arrived at Brigsteer to find Tim a bit unsure whether it was OK or not. The wind had eased and if anything I was more concerned about it dropping further fairly quickly, so was ready for take off  about 15 minutes after arriving. An easy take off and climb out and sure enough Brigsteer was on form and doing its typical evening stuff - very bouyant, even out over the valley and with odd thermals.

I explored the ridge, then out front and had a lovely time in smooth air. Tim had a bit of misfortune on launch and sorting a tree, snagged glider took about 2 hrs, a ladder and a number of people. No harm to pilot or wing ......... just darned unfortunate. Baz came along with his new Delta 3 but 'events' meant he didn't get to fly.

A very nice evening, a lovely site I'd been overlooking ......  a snatched hour is what we seem to be reduced to at the moment.

A bit of video trying out the new camera, (S7J STAR) which I'm delighted with. 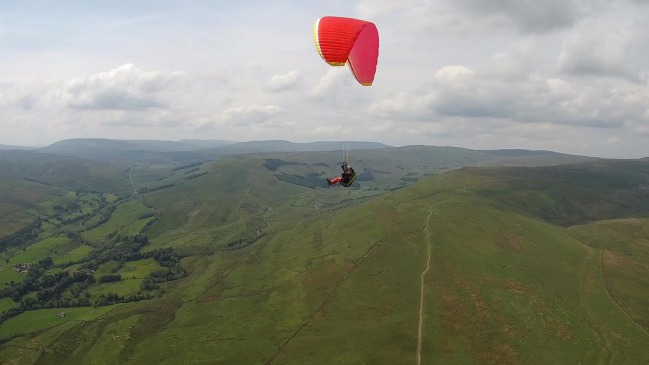 Pete Darwood not letting me get closer.

Not the most inspiring of days. light wind and lots of high cloud to begin with, then .... when it broke and decent cu's arrived so did the wind. Base not much over 3000', but essentially it was the increase in wind that spoiled the day.  Pity ..... a full house on Stags.

After several abortive attempts spread over 2 hrs I managed to get over onto Cotterside and set off down the ridge for the Moorcock. The flying had been generally smooth and it didn't seem too windy at height. The sun had started to have more strength, but as I suspected the wind had too much east in it and getting back was going to be a problem. I turned back from the west end of the ridge and found it slow going with the ridge not  really working. At the east end I waited for a cloud that was building out front then headed out and it worked a treat. It provided the  height to make it back ..... usually an easy run, but not today.  The climb gave me about 1300' to play with, but the sink arrived and a fresh blast of wind. I got to Humesett only to find it worse with the wind along the ridge. Eventually I gave up the ghost and headed out to a familiar landing field ............ and a 90 minute walk back in the sweaty heat.

At least a day's flying from the recent spell of poor weather and that's about all you can say. 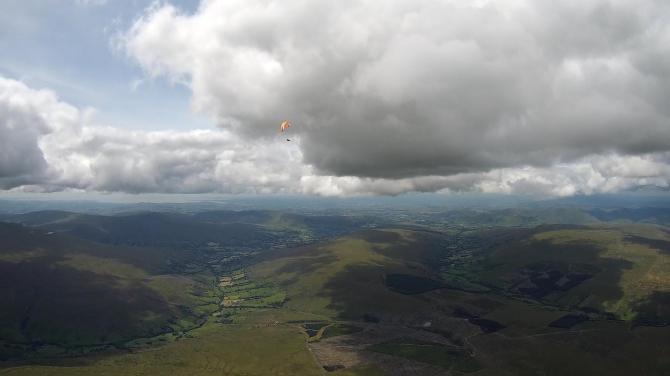 As a group we made the collective decision that Brantside was the best place and triangles the order of the day. The wind was light, but with regular thermals coming through and of course Brantside thermals well with its excellent draw and into sun faces.  Mike's theory is to wait for the train to trigger a thermal ...... but we didn't have to wait for the 13:15pm as it lifted off a bit sooner.

The first group off (Steve E, Mike, Ali, Geoff and myself) got into an immediate slow climb that improved with height. base was better than expected at approaching 5000' and the drift slow. Mike took the lead and headed off with everyone else tailing along. Passing Wether it was obvious that it wasn't working well with lots of gliders covering the ground. I took the high, slow route to the first TP behind Addleborough whilst others lower down searched ahead.

The next climb came a few k's beyond the TP; for Mike and Geoff this became the mother of climbs as they were soon calling heights above 6000' and immersed in cloud. Geoff's radio comment went something like, "At 6500' and still in strong lift (nervously)". A few minutes later, " .... just broke out of the side into clear air  ..... tremendous views (relieved voice)". Without the same extravagant height, Steve, Ali and I continued at a mere 5000' along Bishopdale towards Buckden Pike. Arriving there, another climb took us back to cloudbase whilst Geoff and Mike could be seen as dots sinking ever lower on the slopes near Starbottom. It all looked a bit desperate from on high as they scratched ever lower.

Steve, a bit lower, swung off left as we crossed Wharfedale, whilst Ali and I pushed on the direct route over the moors to our TP near Litton. A good climb over the moor in zero drift gave us the height to push the 3k south to tag the TP just beyond the village.  The return to our previous climb showed it a bit weaker, but still working. Having cut the corner we were now in pole position, but from high in our climb we witnessed the three wings of Geoff, Mike and Steve coming in  a lot lower across the moors and heading for our climb. Somehow they had got out of their predicament and approached the TP from the south.

Now for the final leg.

You soon lose height on  paraglider and as Ali and I continued towards Oughtershaw it unwound slowly but surely. Upwind? (to the south) are large tracts of forestry, some harvested and with large roads (tracks) I never knew existed - and probably don't on maps. The terrain looked excellent and it was in sun, but the clouds above looked fairly anaemic compared with what we'd been used to. As Ali and I scrabbled in weak, broken lift high above Geoff, Mike and Steve were in cruise mode towards home ........ tables turned again. I felt we were in a 'sort of' climb that didn't have the legs and opted to push forward - Ali however, worked it back and got higher. Maybe I should have too as it was looking a bit desperate as I passed south of Dodd and the main road.  It became time to gamble.

Without a lot of height (850' ato), certainly way too little to get back (another 8k) I kept tracking over the moors towards decent clouds. The terrain was good, the slope OK and the sun was warming it .... surely it couldn't be that sinky. Approaching better sky I was able to maintain then climb a little without turning ..... it always hinted at better ahead - so I kept pushing forward to approach Brantside from the south - around the end. I rarely made much height I didn't lose again within minutes - but I was edging into a good position for the final run in. Finally I deemed it doable and headed back NW.  Brantside turned out to be a sinky place at this particular time ..... passing over the deep gully/valley to the east I was sure I saw a glider laid out where no glider should ever be (turned out it was Geoff who got drilled from a good run in height - very cruel as he just couldn't hit the closing cylinder, but just made an FAI by 7m!).

I cruised back past take off ok, expecting to soar and fly back to the cars but it was not having, it so I landed back near take off ...... VERY pleased to have sneaked back those last hard fought kilometres. Mike and Steve had had an easier final run in with height ..... maybe I should have waited 10k back; Ali made it in similar fashion to me by a higher different route but arriving at the same height .... so same result but maybe without the stress.

Some drinks at the Moorcock (refurbed and excellent) to celebrate making good use of the day.