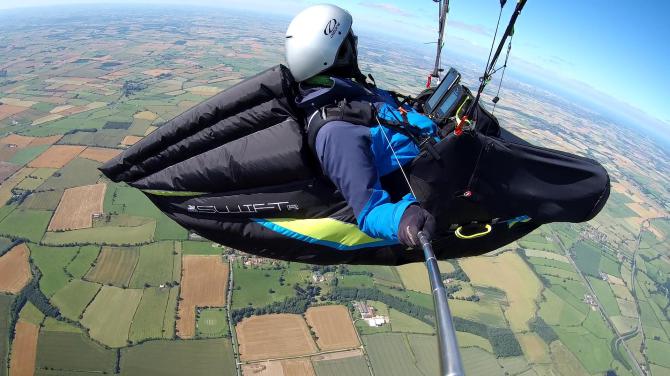 The first week of July had been pretty poor, weatherwise, but by midweek, the 8th (Saturday) looked to be offering a decent day. All forecasts agreed on a westerly, light to moderate wind but no great thermal strength and base at below 4000'. Not a day to get too excited about for xc, but good for a coaching day.  At least it should be possible for pilots to get lots of low stress, airtime. Well ..... that was the plan.

With most folk going into the central Dales, Kev gave me a lift over to Hawes. We buttied and coffee'd in the Creamery and met up with others with similar ideas.  Outside it seemed windy, in fact depressingly blown out whatever the forecast had said .... but the sun was out in a near blue sky.

Lots of us met up at the roadhead to Wether and decided it was .... windy!  I didn't think it too bad and with Dodd 10 mins away it seemed worth a chance. So off we all scooted.

Pete Logan was already flying and Tam took off as we got to take off. Actually, it seemed OK aside from the wind tending to pull off to the SW. The NE lads arrived and they don't mess about, gliders out and let's give it a go.  The small group of pilots after some coaching rather dithered too much .... but to be fair it wasn't ideal for them given the wind was off the hill and the lift a bit punchy in the gusty air.  It was a day for experience, so most sat it out before departing.

By 2pm only myself and Kev (packing) were left on the hill and most had set off for Brantside - not sure what flying they may have had there and earlier Gary and Ali Guthrie had set off over the back. It took a while to get the wind to come temporarily onto the hill before I could get off. The far end was working and within 10 mins I was away in the first thermal - in fact I'd little choice but to go given the wind strength. Passing Wether there was the odd rigid flying low down but no paragliders. Heading for Semer I got the second climb ..... again, nothing very strong, just something to hang onto and drift with.

Midway down Wensleydale I was getting low again. The main problem was the lack of clouds and their short-lived nature.  There was a fair bit of hunch and guesswork - and for once I went out into the valley to get the next climb .... it was the only place with a hint of cloud.

And so I drifted on, never high and always searching for any wisps that seemed to be building. At some point along the Bedale road there seems to be a big pigfarm - I think? I'd heard they work so went and sat over it and it offered up both lift and a smell - so there may be something in the theory.

Although I'd set off in a fresh SW(?) it seemed a lot more westerly the further east I went and all the thermals very mellow - lovely flying in fact. Shortly before approaching the airspace at Topcliffe/Leeming I just entered cloud at 4,300' - so base was OK. It was a bit of a scratch around the ATZ as the weak climbs had a tendency to drift me towards the edge.

Once round I was on familiar ground towards Northallerton, but getting lower ... and lower. Fields of horses everywhere. Being only about 700' it was getting near landing time.

The next climb began very gentle and very weak, and continued in that vein for a long while but the altitude crept up slowly. Passing to the north of the town it grew in strength and a real cloud grew above it. Another low escape which I seem to be making a habit of this year. Touching base at 4500' I had a dilemma. I'd set a goal for Stokesley .... not too far at 77k given I'd set off late. Just one more climb needed. I tried to maintain and use the excellent drift. My gps gave 21:1 glide (needed for goal) which was nowhere near what I had to make it. The maintain/drift approach worked for a while ... and I got it down to 15:1 .... still too high.  The sink was setting in and the windspeed was giving me over 60kph at trim I took a shot.  The sky was blue .... not a hint of cloud ahead, so a push and hope.

As soon as I set off the sink set in .... and it was pretty bad with the alarm (set at 4 down) constantly droning away. As the k's passed the height unwound faster still and the glide went up again. At one point I considered heading back upwind to a growing cloud (?) ... just wisps.

It seemed too far away. My last gamble was a small round hill, topped by trees and with cropped fields below. Aside from a few half hearted blips it didn't deliver. Shortly after I landed - about 6 or 7k short. Damn! so near.

As a flight it was very enjoyable and quite technical in parts. There was rarely the comfort of having lots of height and few clouds to act as a sky guide. But it was a lovely blue, warm sky, easy, if slow thermals once you found them and great views  for miles. The wind speed was about perfect for long distance flying.

Mike had a plan so we all tagged along as the hill was handy, we had his permission to fly it and he had the triangle all worked out.

It was a nice looking day, but the wind was light and forecast to back 90 degrees - quite a few unknowns. Geoff and I plugged in Mike's route - big BUT - we had the wrong format, not by much but it screwed the start.

Mike was first away and first climbing out, then Ben and I followed by Geoff. It was going OK until I noticed we still had the start to tag .... back Geoff and I plodded, losing height all the while and then once that was done back into the hill ..... losing even more height.  And that ...... was the end of the flight basically. Everything shut down for us.

Later we gathered at Shap and watched Mike's tracking until on the final leg he came over us heading south and the completion of a great and quite ambitious triangle on his part.

Joined Kitt on Brigsteer about 5:30pm. He'd already had 45 mins, so I missed the best bit. Still it was a lovely evening and the flying very relaxing. As it started to die away into the evening I called it a day and left after a chat with an even later Ian Ferguson.

Didn't get to fly, but saw a lot doing so on the Sunday (Saturday unflyable)

The night before Kerim had asked about the flying possibilities for a tandem with Margaret Iveson (farmers' wife). It seemed OK if we went early - forecast to blow out later. We met at 8.45am and as it seemed OK called her plus family up. We had a decent period of weather and gave her the tandem flight whilst both Kerim and I videoed. I had a good flight after Kerim left, but within 30 minutes it was getting on the windy side so landed and went to Hawes for a late breakfast. 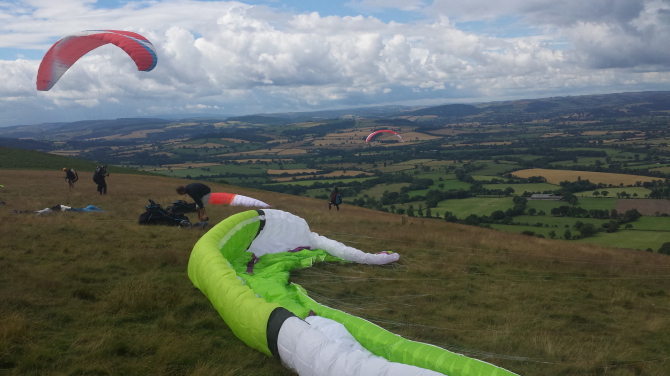 The day was canned due to possible storms. Brian and I, plus about a dozen others took a chance and drove to the Mynd. The weather actually started to look quite good as we approached so we were fairly optimistic.

It was light on take off, barely soarable and  often off to the north. Still, we laid out and waited - it didn't take long and in about 20 minutes we were airborne and climbing with a decent gaggle. It looked good downwind and most headed off, but mindful of the retrieve, and thinking Brian had gone I decided to explore out front and stay handy for the car.

I had a good boat around for about an hour, the lift was good, but it was clear the clouds were building and everything shading out. I landed, packed away ... then was persuaded to give it another go, but it had clearly switched off for the day so landed for the final pack and left for base at Tewksbury. 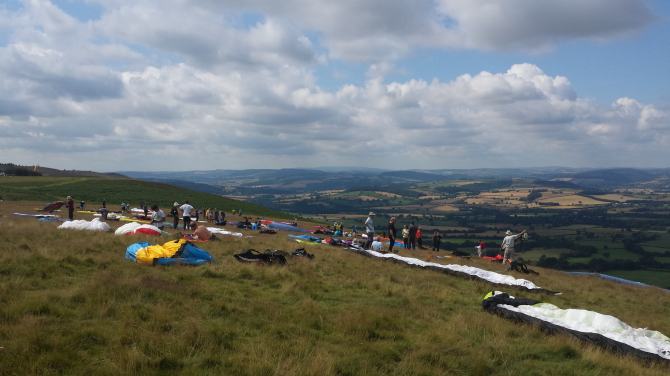 A decent forecast and a promising looking sky. Back to the Mynd by coach and some shennigans getting the last few miles to the top. Tony, Bob and I clinging precariously to the rear of Guy Anderson's 4X4.

Very similar in many ways to the Sunday. A good looking sky that threatened to go big later, light winds and often well off to the north. The task was an 83k race back to base at Tewkesbury via two turnpoints giving a dog-leg either end of the Malverns.

For a short while it was a confidence launch, some sinking to the lower slopes or worse the bottom field. Eventually a weak climbout took the first large gaggle over the back - but it looked slow going and was short-lived. For the rest of us it became a long wait, odd unsuccessful launches into sink and punctuated by the sweaty arrivals back at launch from the bombouts.

Almost two hrs later, with 50 minutes remaining until window closed, the hill gave a second release and most of us were gathered up and soon found ourselves milling around at base. A few missed the final climb and got caught in the winds that blasted onto the hill later. They were unable to get away.

The drift was very slow and the urge to move on broke up the gaggle into small groups and odd gliders streaming off downwind. A messy state of affairs, but wind dummies everywhere. Then .... with shades of the aftermath of a dogfight, it seemed very lonely and quiet everywhere. The sky looked quite active at this stage, in fact staying out of cloud and weaving a way through seemed to dictate the plan more than staying up.  Various long glides ended in lift and it seemed more a race than anything to stay up with the pack, but unknown to me was that pilots were finding it getting tougher to find lift. Some company would have helped.

A long glide took me over Ludlow where a glider was climbing OK. I came in 100' lower and took the climb, the small core was a fiddly thing to work, but slowly I gained height  and was back into thinking I was in decent air again. A number of good pilots had gone down near here in the first gaggle (radio reports) so I was feeling confident again and a good cloud or two lay ahead. A distinctive black and white Zeno zoomed in below and joined the climb for a while, then deciding it wasn't worth the trouble hared off downwind. I watched him go as he sank lower and lower until a dot in the distance .... no idea if he got up again, but he was low.

At this point I made the same decision, probably not a wise-one bearing in mind Mr Zeno's fate, but I had two clouds that looked OK. The first, earlier mistake was actually to wander back upwind and lose precious height, by the time I too steamed off downwind I was the worse for 1300' of height. I started off optimistic, but no clouds worked and the sink alarm was unrelenting. Eventually I touched ground somewhat disappointed to have given up a decent position probably due to over confidence.

A lot of walking, an encounter with a ferret, three trains rides - plus short taxi with Mike H (owe him £4) and back in the pub by 10.30pm.