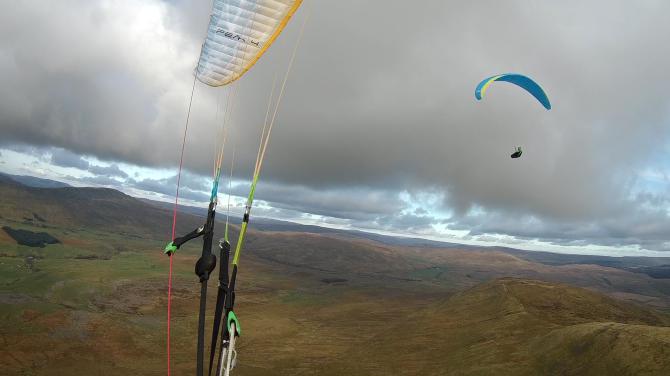 A surprisingly nice day ... at this time of year they tend to take you by surprise.

Ingleton was wrapped in dense mist until late morning, but this is fairly typical for the time of year. Five minutes drive into Chapel le Dale and as hoped the sun blasted through to reveal a stunning day of blue skies, dotted cu's and great visibility.  I decided on Park Fell as it was handy and probably the best place for the light NW to WNW wind. I met up with Dennis and Simon near the Hill Inn, about to take the long usual trek into the SW bowl. With little persuasion they latched on to Park Fell so off we all went.

A fairly pleasant, occasionally wet underfoot walk in to the main slope. The wind seemed undecided between light and occasional stronger gusts. We feared it may actually be blown out. At mid-height on the usual take off step it seemed fine ... light with stronger bits. I took off as Dean arrived at the foot of the hill with the school; to find it very bouyant and mostly smooth. Others soon followed.

Preparation comment ... must do better. I'd forgotten my duvet top and knew my time in the air may be limited. It wasn't especially cold, but gradually it would get through my single sleeve top.  After a boat around Park Fell I headed south towards Ingleborough with Dennis and Simon following. Down below it was getting busier as others arrived ... Park Fell is usually a solitary flying experience.

Approaching 45 minutes the chill started getting through and the wind increased so I went down and landed. This was probably premature as an hour later everyone was high and the wind seemed light - I guess I missed the best.

A quick ride to Newby Head to pay the site parking  fees and allow myself to get talked into buying a choc and coffee cake from the farmer. It does look nice .... if very fattening! 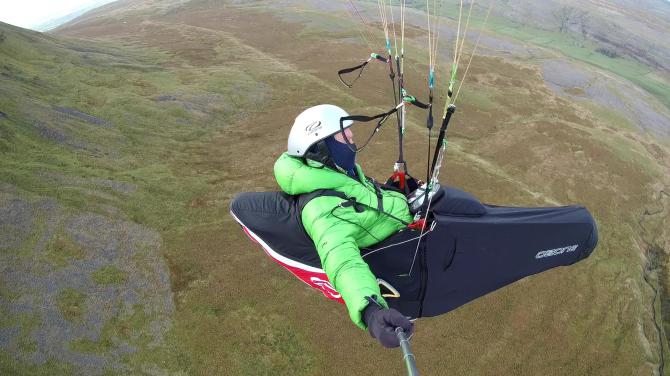 A frosty, calm and sunny start to the day. Some wind was forecast from the west but as it turned out the Dales and Lakes were pretty much becalmed wherever you went or high you walked.  With Ingleborough on my doorstep and able to accommodate any fickle wind so I went there - it was also International Mens day and Tam's Birthday to boot. I thought he may turn up there eventually to wish him HB.

A pleasant walk up in the sun. At the main bowl it was almost soarable ... but off to the south to I continued to the summit. It was still light on top, a few kph and southerly. High cloud was now cutting off any sun. Laid out - gathered a few photographers who were keen I went asap so after 10 mins chat I launched and set off for Ingleton. The problem was a slight headwind, so with some doubt I may end up landing short, I swung a right and landed by the car at the Hill Inn.  10 mins later a second glider was seen heading my way but landed a few fields back - not sure who it was. (found out later it was Tam ... working a plan). A must read

No great flying, but at least some Sunday exercise and I packed my glider neatly.