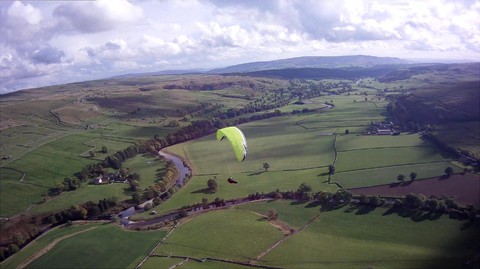 Simon Goodman over landing field after a good day on Windbank.

I spoke with Kerim Jesperson on the phone at about 10am and it didn't look too good at Windbank (light and south)- he was having coffee at the troutfarm below the hill. I was going to go to Cross Fell, but as he had a new Triton 2 I thought I'd have a look at it - and as it may get flyable later, we could compare the T2 and the M6 (so took the video cam). I reckoned on the wind coming round from S to SW about 1pm and picking up a little from very light to maybe soarable - as per the forecast - showers were the main worry. The  south edge of the Dales is often less active and misses them as they build and pass further north.

I got to the top just after 12:15pm to find about 20 pilots laid out. It was sunny, warm and very pleasant with a decent sky, but light and southerly as forecast. After chewing the fat with folks for 30 minutes it started to come more onto the hill and strengthen a little - but still only about 8 mph. As pilots took off, despite it seeming barely soarable it was actually surprisingly bouyant and a few k up the ridge they were starting to make good height. On arriving there the thermals were well formed, giving 1 to 3m/s and going to base (3000') .......... for October it felt more like summer (apart from the base). The ground had been wet from rain the day before, but that didn't stop it working. For the next two hours lots of us climbed to cloudbase and explored 5-6k up and across the valley and managed decent, but smallish FAI's and O&R's. Crossing to Great Whernside and beyond was possible but no-one, me included had it in the plan. From mid afternoon a big shower cloud built over PyG and moved to the head of the valley (Litondale) - things were slow moving so we carried on until it gradually headed down the valley as very light rain/drizzle. At this point many landed back at the cars and some of us later went to the pub.

A superb day out and somewhat unexpected so all the sweeter.

There is a link to some video here. It's un-edited (scuse spelling error in title) and I've left the sound on so there is some wind noise over the vario and my squeaky speed pulleys (Why do Ozone pulleys always squeal?) 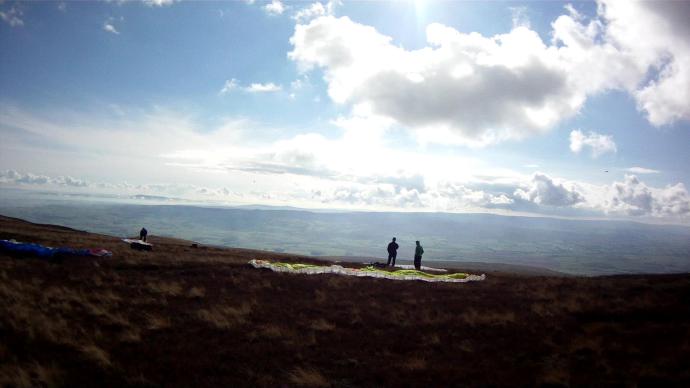 All dressed up! Laid out on top of Ingleborough - but no wind.

Stunning day - warm and sunny but NO WIND!!

Decided Ingleborough as it was handy and there's always a face into wind should it prove soarable - or even to get off for a  (long) fly down. Several others turned up during the parawait ..... Tam, Minhaj, Dennis, Mark, Ian etc ...... all told about eight of us - so it was at least sociable if not soarable.

Eventually, after a bit of shifting around I took off on the SE nose and flew down - there were a few 'almost' thermals and it was quite bouyant; about  mid flight I flew off track to join a thermalling bird. One turn and she/he flew off ..... it wasn't really worth turning in so I continued down. I waited for the others, but no-one appeared - no sure what happened to them, but with my luck the wind probably picked up and got soarable five minutes after I took off. 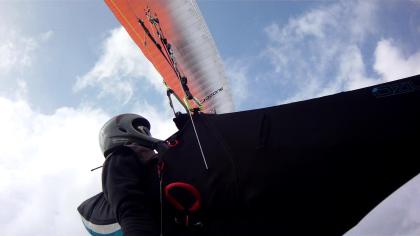 Camera hanging over Whernside on M6

A lovely day, colder than of late, but nice all the same. A very late start due to work and lack of a car - until the garage gave me it back. Decided (unwisely) to walk up from Ribblehead about 1:30pm as about 12 gliders were soaring the east face so it looked off to the east. Took an off-path route that became a long, wet, boggy trudge to the foot of the main face - would have been quicker to have gone the usual way (especially as the wind came more on there as the sun went down). My plan had been to take off really low down and see if I could work it up.

Launched just as the warm sun disappeared behind an encroaching cloudbank. I hadn't really dressed for warmth as it was a T shirt warm walk in. Within 15 minutes I was freezing! I don't usually feel the cold, but his was penetrating so after a further 15 minutes of wishing a heavier jacket and warmer gloves I headed back to Ribblehead and landed by the road.