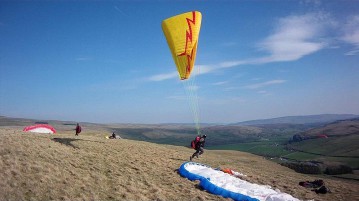 Some great, late afternoon flying and quite unexpected.  Several times I'd set off only to turn back after a short distance, deterred by the low cloud, extensive rain showers and absence of any wind. Well into the afternoon, based on Sara's report of a glider over Windbank, I kept going with a 'what the hell' attitude. I arrived to find two guys leaving, no wind to speak of and reports of Dean, Toby and co at the Kilnsey cafe ..... so as it looked a hopeless case I joined them for coffee and cakes.

A little later we emerged to find it drying out and a  bit brighter, so we all headed back to Windback to find if anything a very light westerly. Whilst I set off up on my own, Dean and the rest decided on Great Whernside and a very wet walk in.

I arrived on top to find Ian Brindle laid out, but no wind from, if anything, the NW. By the time my glider was out the sun was breaking through, the clouds rising and a  light breeze came square onto the hill. A more detailed assessment suggested the airmass had changed for the better .... and really quickly.  I took off expecting a ride to the bottom .... but it proved so bouyant that I went up! Ian joined me and a short while later Chris Kay arrived on take off to follow us off. We had several flights and top landings and explored the most of the ridge before, with the Club Dinner impending, I had to fly down to land in lovely Spring sunshine.

A great outing on the first day of the new season and to get to know a new wing.  I believe Great Whernside was also working well ..... and Brantside too. 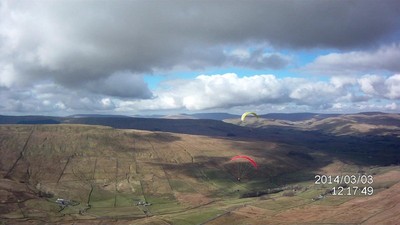 The forecast was excellent and most had it spot on. RASP was on the ball with wind strength/direction and cloudbase at around 4000'. Mike and I arrived well after midday expecting lots of gliders in the air, but found ..... none! Fortunately, as we hit the end of the track Dave Brown took off on his impressive Spark and if that could soar happily ... we reckoned it was looking OK.

People were soon airborne, about 7 or 8 pilots, given the forecast and an early heads-up I would have thought a lot more would have been out.  It didn't take long for the first good climb out to base ... and into it. For once Mike had his radio, but I didn't - which really snarled us up a bit i terms of knowing what was going on. As Mike entered into cloud over the back I assumed he was on his way; shortly after I hit the murk too and set off downwind. I never really saw Mike again and assumed he was well ahead - actually he'd turned back for a triangle that went all over the place including visiting Brantside.

Meanwhile I carried on into Bishopdale and ended up beating the ridge from end to end before sneaking fairly low off the northern edge and crossing over to the the gentle slopes of Carleton Moor. It got a lot more lively here and there were groups of Buzzards doing a good job marking lift.  A tight 8 up core rattle through taking part of my wing with it and I thought I was up and away towards Masham. Not to be ..... I was left searching and scratching in little but broken lift.However, it got me across Coverdale and I arrived very low and just at the wrong time ..... so a landing it was.

Lovely day, good for a Birthday treat and a three mile walk that got a bit better when Mike phoned to say he was on his way. Excellent day out and good to get a real feel for the glider. A pleasant (well hard work actually) 28k ..... I wanted a nice round 50k plus, but it's early so I'll settle for that. 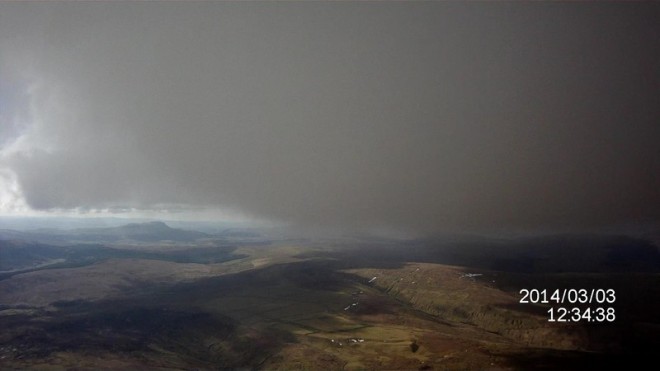 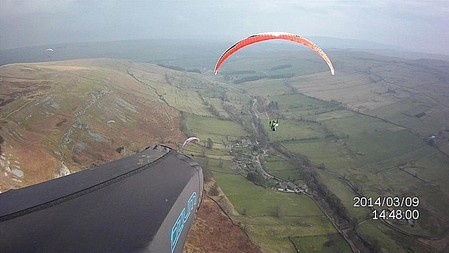 A very uninspiring start to the day, which by midday had become only marginally better. Full cloudcover with a low base and a fresh breeze developing; but at least it was dry. Despite all this, boredom overcame lethargy and I decided to at least drive over to Windbank for the company and a coffee. I arrived to find two walking off the hill but stopping midway down to fly the rest .... it didn't look good. Tam arrived and we did the coffee run as per the previous week.

Arriving back things looked no better, but Gary and the northeast crew had arrived after a 2 hr drive ..... keen or what? With some hint of brightness I decided to walk up for the exercise - everyone else then seemed to follow. It was fresh on top, but not too strong and a 100' lower it was a possibility. We waited it out for 45 minutes (except Rondon) who took off from the walk-up field and provided the entertainment and demonstrated more bottle than the rest of us combined. With a hint of the wind easing and Rondon's example we all got off OK. It actually proved very smooth, very lifty and the lift was very extensive. Soon I counted 15 gliders scattered along the ridge at varying heights. After 25 minutes it was apparent that light wave had set in and we were soon able to cruise easily at height across the valley and along the ridge.

A further 20 minutes and the wave seemed to move slightly; back came the wind trapping some still on the ground or further back - they all managed OK though. Shortly after we all landed after a really nice and interesting bit of flying - the sun has shone (hazily), the sky had turned blue (in patches) and a rising base had allowed us to use the wave to a modest height. Just shows what you can get out of some hopeless looking days.

I'll post a bit of video when I get it edited. 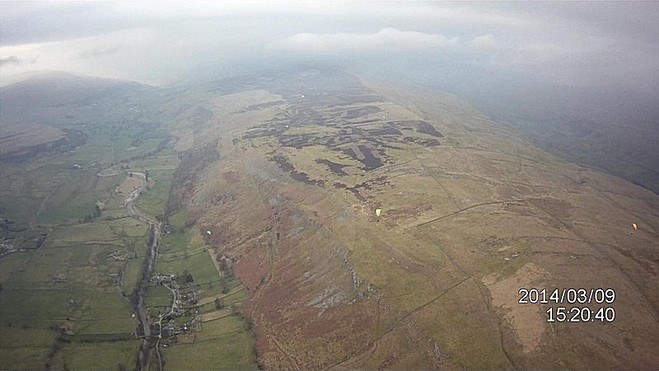 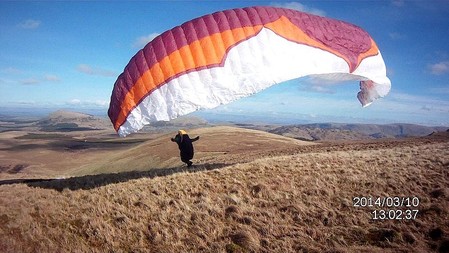 Mike, Ben and I met at Shap which showed a promising northerly, so we headed towards Wolf Crags; that being the obvious choice. A bit of a plod in under glorious sunshine only to find no wind, so after discussing the options we basically flew down ... Ben actually took a weak thermal to about 100' over take off, but essentially we all took downers. We walked out, then drove back in to retrieve Ben's well fingered hat - to which he is very attached. A couple of pints and home hoping for a better day tomorrow. 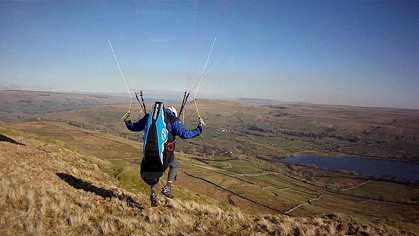 Mike takes off on the M6/Ozium combo

Lots of pleasant soaring on a beautiful, sunny Semer Water. Precious few thermals, but you can't have everything in March.  A nice bunch for company  ..... Mike, Ben, Kitt, Andy, Dave, Martin and myself. Pretty much flyable all day but not a lot of folk out to enjoy it.

Short video of the M6 and ozium 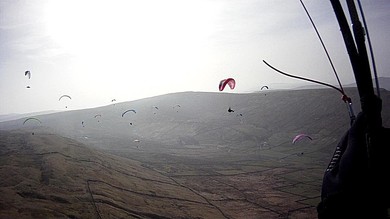 The start of a busy Wether Fell

A very misty morning in Ingleton that stayed that way most of the day whilst a few miles up the road it was sun, blue skies and even on the warm side. An amazing contrast.

We opted to stay on Wether for the craich, although Ingleborough probably offered the better flying given the light wind and that it was off to the north. Wether was popular with between 25 and 30 wings draped over the hillside as we parawaited for something to happen. It seemed unlikely!

Eventually it switched on and provided about 50 minutes of decent soaring and good height separation given the numbers ...... then - just as suddenly it switched off. Most managed to get in on top but a  few hung grimly on until claimed by the bottom landing field.

It never came good again and so we had to be satisfied with what we were given.

Nothing special but it provided a bit of exercise. Bright, hazy and fairly light halfway up - but enough to soar. Once in the air it was apparent there  was more wind a few hundred feet higher (quite fresh) and it was well off to the NE. Endured it for  about 30 minutes before what sun there was disappeared and a touch of the forecast rain started spitting.  So endeth March ..... a pretty shitty month weatherwise. Roll on a better April!