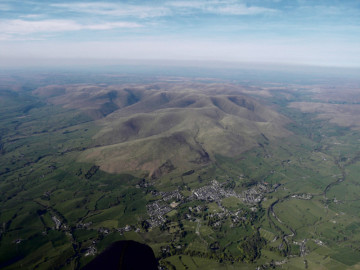 Summer photo of the Howgills from the south

One amazing day given that it was sandwiched between awful weather and was quite unexpected.

We (all six or seven of us)  arrived at the parking area at midday in beautiful sunshine and a light wind. 30 minutes later we were part way up the hill and laid out on clean, white fell grass. Perfect. Well ...... except for Pete S who I found out later had omitted his speed bar and decided to drive back home for it.

Once airborne we found excellent, smooth lift to about 1200 ato; which put us just above the tops and the orographic that occasionally lowered to touch them. Baz Roberts (Delta 2) and I set off down the range with each of the bowls and spurs working nicely .... being on the Volt I kept easing off for him to catch up :). By the time we got to Arant Haw, and my designated turnpoint, Baz had decide on a different tack and was headed out front towards some lower hills. This was a brave move that didn't pay off, and he had to slope land and instead of a pleasant return flight he had to do a bit of walk/fly to make it out to the road. On my way back I passed over a grounded John H who was slowly trudging back up to find a soarable breeze to get off in - John was to have an equal experience to Baz, but did manage to fly  back to the cars at the end of the afternoon.

A really lovely day and great to be out. Conditions were spot on which made for easy flying and great sight seeing. At least it fed the rat after a long layoff.