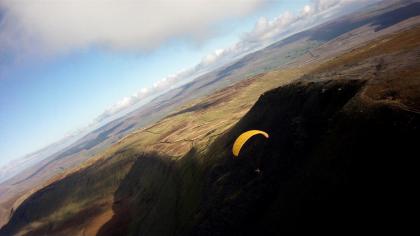 Walked up via the limestone pavings (impressive) with Chris Kay. Lovely morning - well midday actually. The wind was very light and N to NW, which rather put it off the hill, but maybe would allow Park Fell to fly ..... and if that would then so would the full ridge. Chris was off QUICK! Never seen a glider bag put down to wing in the air so fast. Maybe I'm just slow.

Chris proved it was working  - just. We both spent a few beats on Park Fell to gain a few hundred feet and then set off with Chris ahead, down the ridge to the next section. That worked too so I went for the long run around the bowl to the north face - and that worked a treat. The flying was easy and very enjoyable, typical smooth Autumn air. I had a bit of a plan and pushed south of the summit to tag a point ..... I'd already tagged one as a start point out towards Ribblehead before setting off south. I gain a good height then with half bar headed back into wind across the bowl to the ridge we'd worked before crossing. Aaaargh! Nothing .... in fact it was almost down the slope. I slope landed and walked up. Bugger! That was the plan in shreds ..... and it was all going so well.

A little later, maybe 30 minutes or so, it had come a little more onto the slope - but very light. I took off for a sled ride to the bottom, but actually maintained, and scratched and headed north back to Park Fell - crossing the worst part it was again working .... in fact it was better than when crossing it earlier. A short float around Park Fell and as Chris had landed I headed off to.

An enjoyable 90 minutes or so and on a beautiful day - good to be out. 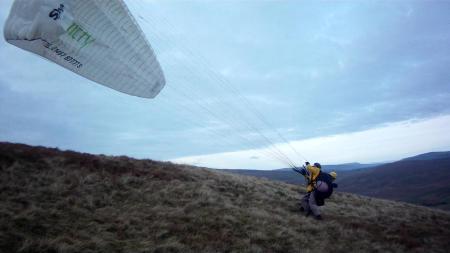 Foggie taking off on dual

Great place to take off. Park Fell must have the shortest,easiest and quickest walk in to any sites around the Ingleborough triangle. It's also very versatile taking E,NE, NW and WNW ...... there is no north face, but it soars OK and allow easy access to both Simon Fell (NE) and the west side of Ingleborough.  The walk in is about 20 minutes to the lower take off, 25 to the middle step and 35 to the very top. And it's a dry path!

I arrived to find Foggie on a dual venture laying out as I arrived. Over on Simon Fell there were about four gliders already soaring, but not high. We had the wind on (NE) but not a lot of it. A short wait and it became soarable and top landable for a spell so I got in several flights. Later it died off again as the sky cleared so a forward launch and fly-down became the final flight of the day.

An enjoyable 3 hrs - some exercise, some flying and some lovely views in the crystal clear air. 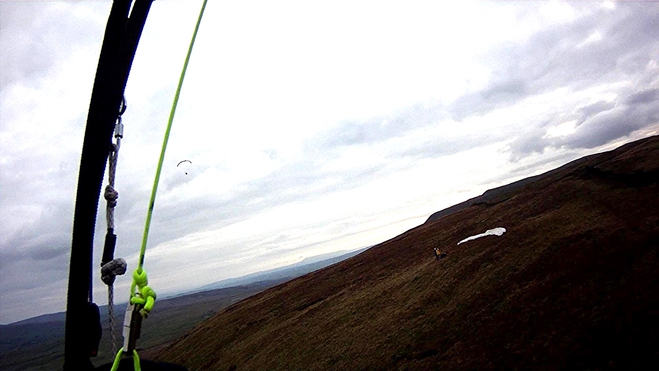 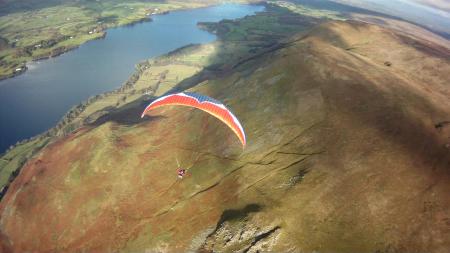 John Hamlett and I arrived to find many cars, but surprisingly few pilots. Following the usual long, not very dry walk in we found a lone pilot, glider in bag and undecided. The wind was OK strengthwise, but somewhat off to the west - so we decided having come this far we'd continue along for another 15 minutes and onto the main face of the crags. Things were better here, but the wind was now fresher making take off that bit more awkward.

I got away and climbed easily in the abundant lift which with height smoothed out  and mellowed. Just arriving I spied the Geordie crew. Soon joined by a few other gliders, we enjoyed the view - unaware that conditions had now freshened to the point where take off was challenging to all but the odd septagenarian. They breed em tough in the NE.

It was hard to really tell what sort of lift we had at times. I crossed the Lake (Ullswater) without too many problems - slowly climbing for much of the way in what felt at times like wave perpendicular to the hill. On other occasions clouds produced weak thermals with the odd hard edge (denser winter air?). Having closed a small FAI I saw a few gliders well south towards Rampsgill Head - my original intention but the fresh wind rather put me off. But if they could hack it!

I passed them en route and was almost at Rampsgill when things took a nasty turn. There was plenty of lift - often going above cloudbase, but it was strong and mean in every sense. Worse - it didn't seem to want to relent and over the back was the depths of Haweswater; not a pleasant prospect in such conditions. It took a full 15 minutes - or along time!! It was a battle to use just enough bar to get forward and in the worse moments ease off and keep the wing open. But ........... I made progress and downwind opened out and at least offered some solice should it all get a bit much.

I approached Barton to find myself going backwards again, and was sliding back for a moorland landing until it eased and full bar got me over the crags again. Eventually back over the cars I looked for a suitable, safe landing. I can't say I found it. It was certainly open moor but it was higher, sloping ground, lifting, windy and a  backwards rock and roll affair - that I could have managed better. Back at the cars later it was light (bugger) .... next time.

An interesting flight, good in places, but also with some stings. I would say the most dodgy flight I've had this year ..... and probably for a few more years back too. But I live to flight another day :)

Don't be too fooled by the benign nature of the video!

Walked up Park Fell to find no wind and hints from every direction. Meanwhile ...... further along the ridge towards the main Ingleborough summit, gliders started climbing in what had a hint of wave looking at the sky above them. One was certainky Alex Colbeck judging by the spiral descents from cloud at times.

Me? I flew down. Should have done the Lakes walk I had planned.