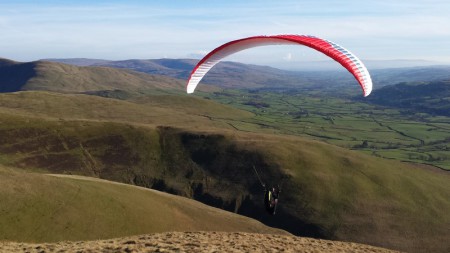 Pete Southern takes off from the top of Far Whitestones

Dull morning with light drizzle but clearing as I reached Windermere in time for work! By noon it actually look really nice and better than the past week. Air quality a lot better and a nice, light SW wind with cu's. Only thing is  .... I'm on a workday!!!

Rushed off after school and arrived at Far Whitestones to see Pete Southern having a good time but no one else there. Took off half way up the hill in light, scratchy conditions and then worked hard for the 40 minutes I got. Quite lumpy with odd bits of lift and sinky holes. Top landed and chatted to Glen and Pete (who'd gone down some place and then walked up to the very top (my fault for making it look flyable) - when it wasn't great and had now gone very light and off to the south. We all took off and slowly worked our way down the hill.

Grateful for any chance at the moment though and it was a stunning evening and quite warm out. 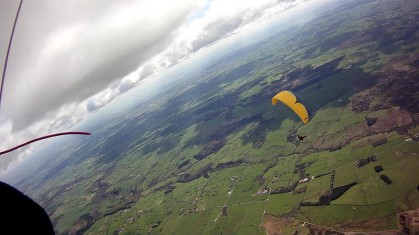 Martin Baxter thermalling his Sigma 8 on edge of VoY.

So far it's been a disappointing Spring, but Friday arrived with a screaming rasp - and right on our doorstep. The Dales was the place, so Wether Fell and adjacent Dodd equally shared the crowds. No one knows quite how many but estimates put it at around 50 - 70 pilots.

Along with about 20 others I opted for Dodd with its more reliable climb out. For reasons I now find hard to explain I set up, then decided to change my declaration and opted for Selby. Whilst it provided a focus it was not a good decision and would be my undoing later - not least because the wind direction later over the VoY was westerly and meant crossing  streets. I think I was acting on previous forecasts for it to be more northerly.

The climb out and push forward for the start cylinder was very fast - infact I was up and over back without a single beat. Base wasn't particulary high over the moors and so I stayed high, flirted with clouds and edged along slowly; I could see others below scrabbling around which I desperately wanted to avoid.  I never saw any big gaggles - just small broken groups, pretty much scattered everywhere. Coming off the moors towards the north of Harrogate it got quite hard work and nosing east around Knaresborough was slow and lowish going and I was only able to maintain between 2000' and 2500' . I pushed further south after a good cloud - and it worked well putting me back up to 5500'. Bouyed by this I headed south for goal (about 25k away), speed was slow and I'd step out of the lift line. I really should have binned the goal idea and just gone east towards York. Seems obvious now ..... but greed and complacency was my undoing. I always feel a bit pissed off having done a lot of work to get in a good position to then blow it like a wild gambler!

There were lots of personal bests. I went with John Hamlett - John was suggesting on the drive over he'd be really happy with Masham (about 34k). More than 4 hrs after take off he landed at 124k .... no too far from the north sea. Ali Westle ....... striving for his first 50k in the UK eclipsed it by a huge margin with 122k.  XC flying can be a great leveller at times. With the confidence that doing well brings I expect some good stuff from them this year.  It's worth noting that Chris Scammell did what was expected of him and flew a blinder of 140K and edged out over the North Sea for the extra point.

All in all - some great flying but I feel a tad disappointed with 72k.

A few video stills at LINK 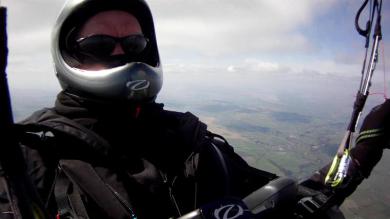 Selfie near base over Barnard Castle

A great Rasp up the very spine of the Pennines, but with the winds tending more towards the SW as the day progressed.

Just under the full quota on Stags (surprisingly). Until 12:30 the day was fairly blue, but eventually some small cu's formed exactly as and where rasp said they would. However, step out of the zone at your peril!  Most of us took off at about 11:30 and enjoyed really nice, light wind thermalling but never quite strong or high enough to encourage us to leave - we kept getting tempted. Finally, with a degree of desperation (Jake and Dave Smart were a little more patient), Fred (M4) and I drfited off into the west end of Swaledale .... I was lower and it was touch and go to reach the higher ground on the other side. It just soared and the beat was short. We scratched around on the lump for 20 frustrating minutes with nothing much happening so i decide that if I gained a few hundred feet I'd head east to a better looking ridge with some clouds above. Luck was with me - I made the long glide to come in at crag top level and immediately connected with a good, solid climb.  It didn't make base but I was away ..... I looked back and saw Fred still scrabbling on the first bit of ridge I'd left 10 minutes before.

Crossing the moors was fairly straightforward, with a climb midway. The thermals were getting better and base was rising with each climb. Smoke fires on the moors suggested a SW drift. Eventually over Barnard Castle I climbed into cloud (5800') and should have pressed through to the NW keeping me better placed for the Newcastle airspace and avoiding the dead, blue sky to the east. Instead I popped out of the east side when I didn't really need an escape route given the benign nature of the clouds. It was a great chance to head west that was soon lost.

Before I realised my mistake I was out of the good thermal zone and going to find it hard to get back west around Newcastle. I edged north but there was now nothing doing - so  time to pay the price. With goal (north of Corbridge) abandoned I went with the drift towards Durham as the airspace stepped down and the lack of thermals conspired to see I paid the price for another inexplicable bit of dumbness. I landed at Crook for 52k (56k with tp's)

Both Jake and Dave showed a lot more tactical sense and kept udging west, keeping to the higher ground and skirting the west side of airspace ..... in fact they overflew my goal comfortably.  I bit of a gaggle would have helped - especially with the decision making ... and doing moves in good time. 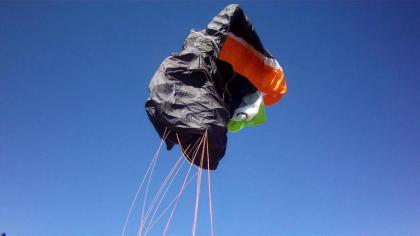 With a decent rasp, but no wind forecast, it seemed obvious ... Yoke. However, I was all indecision and more by good luck and persuasion rather than any skill,  I found myself on the right site.  It's a long walk in, but I actually enjoyed it; the sun shone, the wind was light  and from the north west - hang on that can't be right - should be NE; it said it would be. Still ... it has a NW face so who cares. By around 11:30 even those with heavy sacks had made the top and sent out scouts to find a suitable take off. All came back with nothing doing ..... however, Mike then arrived with other ideas and set up overlooking the east face - so we all followed. A few invisible dusties put in an appearance ..... really odd to see a glider pirouetting skywards a few feet from you whilst you're laid out in perfect calm.  Until that is your turn comes .......... so you grab hold of a bunch of lines with one hand and film with the other (not clipped in I should add).

Ben and Mike got off first and started climbing (without style - it was obviously a bit fruity!). Phil Wallbank and I followed. It was distinctly tasty, but at least it was going up and soon everyone was tempted off. Actually, once you got used to it, it wasn't bad and only about one in four thermals had attitude problems ... the rest were fine and I never saw any wing collapse even partially. Still .... you had to work.

After about 20 - 30 minutes we started drifting off towards Kirkstone Pass  .... at this point my radio did something strange (never me)  with the channels and no communication resulted which was a  big loss on a day like this.  For the next hours we were high (mostly), low (sometimes), even desperate (occasionally) and generally battling our way westward towards whatever turnpoints we had set (mine being Bowfell). All was going pretty much to plan until whilst getting a kicking  over Stickle Tarn my harness sort of gave way. I knew a support line had broken internally, but at least it wasn't a high dependency line, so after a re assess I thought it OK, even if it felt a bit weird.  What it did was hit my resolve and with about 3k to go to Bowfell I saw Ben head back east ...... and like a wimp I followed (this would have big scoring implications!!)

With decent height I headed over into Easedale; by the time I passed over Deer Bield and into the valley I was getting worryingly low ..... would I even clear the valley as an escape? I scraped a few hundred feet off a craggy bump and went for plan B ..... the Lion and the Lamb (which was I?). It was well decorated with spectators as I slid close along the flank below the craggy top and round onto the front spur. Pow! (literally) ... like many years before it delivered a mother of a thermal that was more cling-on and pray than perform lovely circles. I wondered what all those spectators, now level, soon below thought ..... How serene? I know what I thought and it wasn't heroic.

From that point on getting back to Kentmere seemed a given. It took a few more thermals but they were where I expected, all strong and going high. It was nice to cruise back over Kirkstone with the help of a strong top up to over 5000',  then across to Yoke, well above take off height. The glory basking moment was a bit short-lived however, as I suddenly realised I had to clear 35k to get the Brucie double bonus.  I'd made 33k (thinking stupidly it was 25k). Another lesson learnt ..... it's taking a lot of years to stop making bad f*** ups.

Whatever else the flying was fantastic - even somewhat unexpected. The thermals were not all friendly but you got to know a lot about yourself and your glider. A confidence boosting day over the Lakes, and did I mention the scenery. What a privilige to fly above it ... and sometimes a bit below it too.  Hours later - when decent folk were thinking about their bed, Mike arrived back (6pm) .... I ask you; What sort of a time do you call that?  All respect ..... and check out his low devil infested saves!! 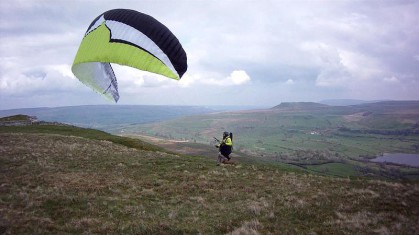 Baz Roberts brings up his Delta 2

A pleasant, if unexciting afternoon boating around on Semer. We avoided any showers and the wind stayed on the hill all afternoon.  Earlier we had looked at Stags but it was well off and very light so we were surprised to find it at least flyable  and pleasant in the weak sun. Odd that no Dales pilots were out.