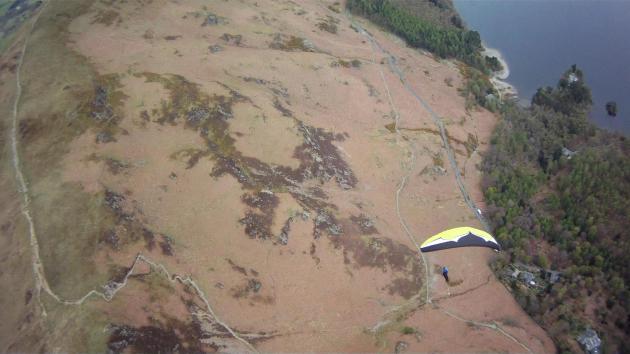 Thermalling with Ant Moore over Catbells

We had a breezy forecast and a bugger of a direction at NE with some of the sites covering that direction out. Following a group meeting over coffee at Wilf's cafe we decided on Catbells.

Intially this seemed a good choice as we arrived to find about six gliders flying and doing OK. The wind was getting stronger until all the strong gusts seemed to merge for a few hours and we stood down - or rather sat and chewed the gossip. Eventually, it seemed to drop and settle a bit - or at least enough for Ant and myself to get off. Once airborne it was surprisingly OK ..... we had good forward speed and a mix of good to rough climbs. We headed down towards the Jaws .... and it would have been quite possible to continue but ground reports said it was strong - we felt OK. Ant landed at Grange whilst I returned and landed by the A66.

I really enjoyed flying Catbells - a new site to me. Very scenic and one site I must return to given an easterly and a bit less wind.

A few video still can be found here   SMUGMUG 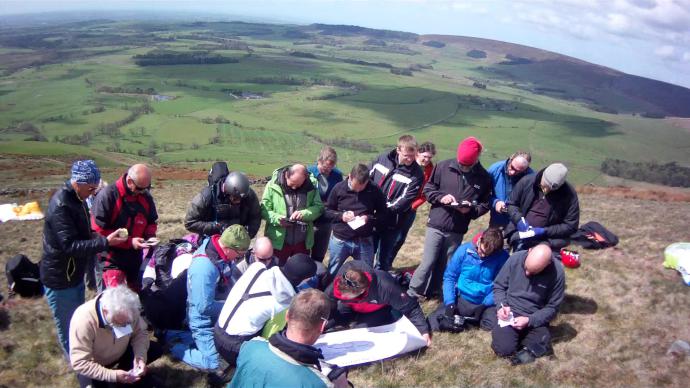 Tasking under a lovely developing sky

We lost two of the three days due to grumpy weather, but the final day provided a great sky and light winds on the west bowl of Parlick. Given that we didn't have a big time slot and the time to get things under way, the task was a modest, but highly entertaining elapsed time around three turnpoints with a goal at Dunsop Bridge.

Just as the window opened the wind fell fairly light and moved off as forecast towards the south. This slowed things a little until a good spell of lift appeared just in front of take off and allowed about a dozen gliders to climb slowly out. Luckily I was in there, but the usual impetuosity kicked in and after two turns I decided to run for the bowl and get good lead out points at the start of the SS. This turned out to be a really bad move and Lady Luck deserted me to leave me slope landed in the bowl - bugger!  A look back saw everyone else (well lots) still slowly climbing at the start.

A hurried walk up for about 200' and although I doubted there was much working I was in a rush to take off. It could have been down, the timing was accidental, but good. I climbed out enough to get back to take off, tag the start and get on my way for the other turnpoints. Generally things worked out, there were  climbs when needed although I probably took each one way too high rather than push on. Having got the final turnpoint I got the best of climbs out of the back of the  bowl and I definitely took this one way too high - in fact half the height  would have got me to goal, but how do you leave a really good thermal? It took me to about 4000' before I abandoned it - and it was still going up.

So goal achieved, but over the moors could have produced a decent xc flight - a pity goal was off into the valley. Anyway, a nice bit of flying in good company so can't complain. I must get faster!!!!!

Will post a link to the results when they are posted. 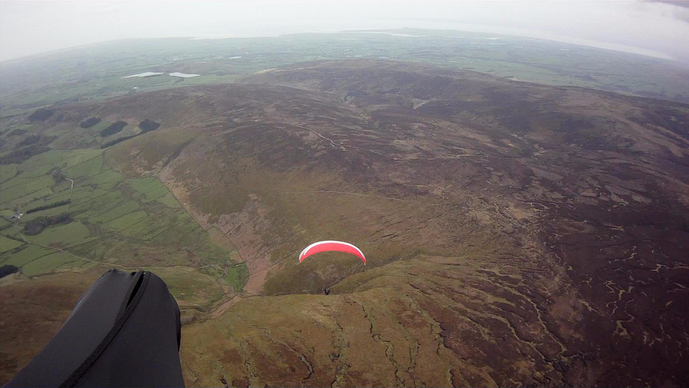 Great climb-out before heading for goal. We'd lost the strong sun, but the thermals were OK. 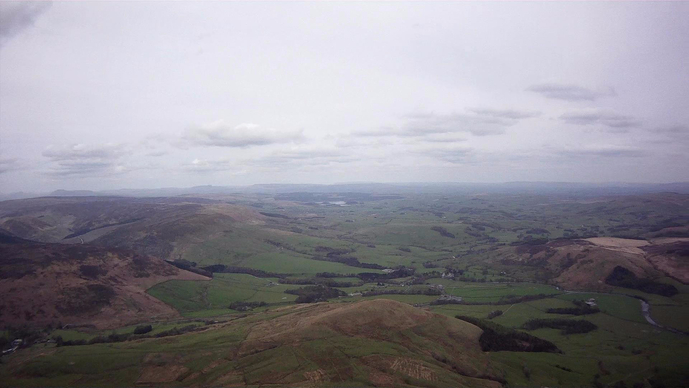 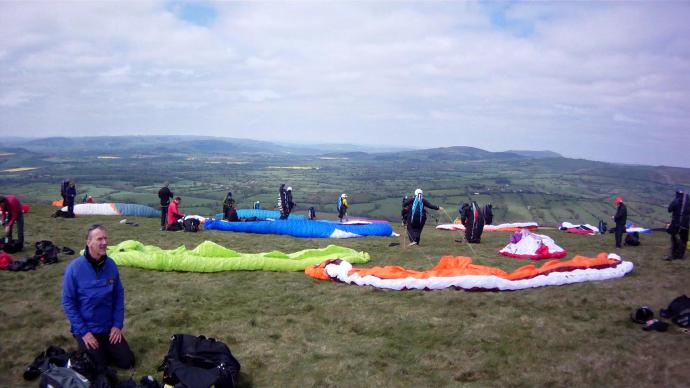 Drove down with Baz and Pete to find a packed Mynd with most of the paragliding gliteratti. Not a great forecast and this would be about the best we would get. Simple task - go as far as you can.  With the wind consistently  across the slope it meant - for many a number of attempts to get up in the weak thermals. Lots never managed it it, but some did and did remarkably well reaching their Ashbourne goal, and then some for Phil Colbert. By about 3pm we were getting a bit dispondent and I tried again with a small patch of lift. Went over to the north end of the ridge just above an Envo 2 (turned out to be Gary Stenhouse) .... we were a bit low, but he found a weak climb so I came in below him. He beat me fair and square climbing away as I scrabbled back low over the moors trying to locate it properly and stay with it. I lost!  Eventually, being low I was forced to land before it dropped steeply into Church Stretton. A few minutes later Jocky chose the same landing patch - so I was in good company.

Not a great day but we consoled ourselves with some Shropshire beer on the way back. 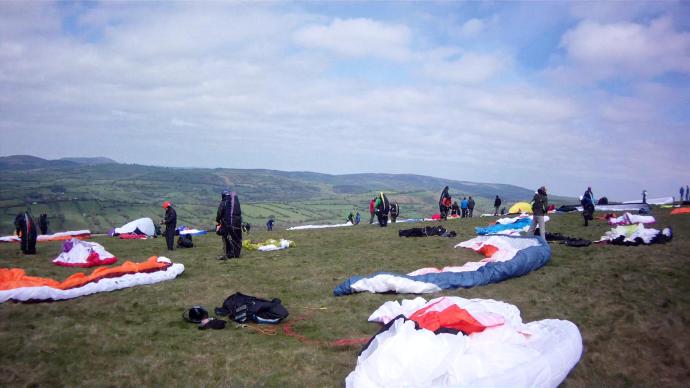 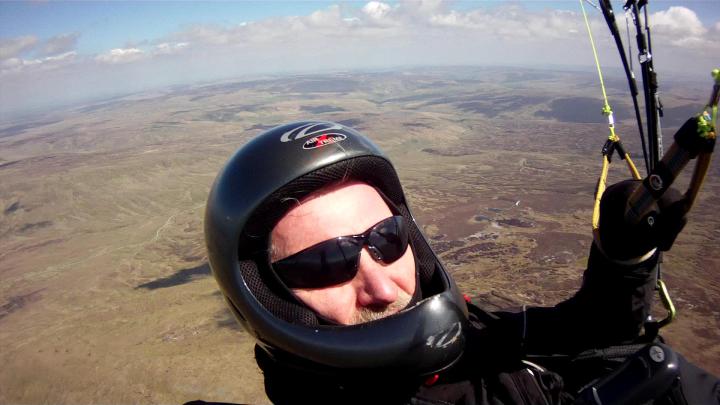 Thermalling over Mallerstang with the rigid boys

With the BoS2 on Windbank I decided on Tailbridge. It also had the better rasp, although I believe much of the Dales was better than predicted. It took a while for the wind to come round more SW, but by 1pm it was working. It wasn't easy though, and for the small number that attended it was a little too uncomfortable for them to handle - especially low down. After a couple of slope landings I managed to get up and from that point on it was relatively easy. All the clouds seemed to be working, the wind was fairly light at height and the cores strong and more organised. Down below they were grounded by the strength of the wind and understandably didn't like to commit to a take off.

From that point on I did a 'Dean'!

I had a good two and a half hours of excellent flying taking climbs to base (4750') or near. I almost fell into old habits and went AWOL from my coaching duties, but after heading towards the A66 I turned back and just meandered across to Mallerstang and around for an FAI triangle. I did get it reinforced that an FAI triangle assistant is a must on unplanned triangles as I lost a lots of points as a result.

Eventually I landed and true enough it was too breezy unless you could handle a strong wind take off. The sea breeze was now in so I figured it would ease - sure enough it did at 5pm, but by then many had left. For those that stayed it was a really excellent period (until about 6:30). It was as nice as it gets with smooth air, good lift and a steady 10 -12 mph - ideal for most lower airtimers. Sometimes for many it's the nicest part of the day.

Drove back with Marek and Helen, had fish and chips and then later joined Dean, Rob, Kerim and Lena in the pub.

Some video stills at (SMUGMUG) 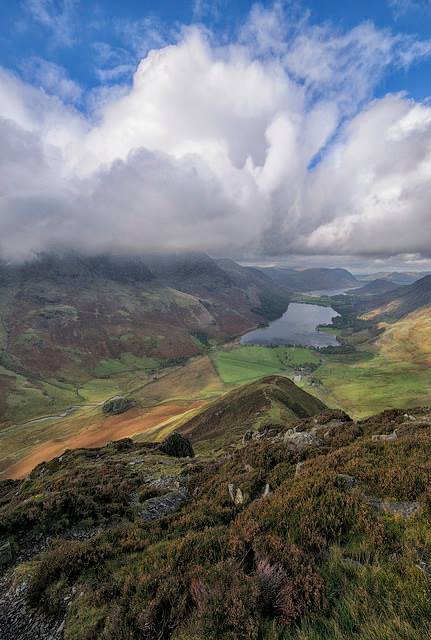 Buttermere - spot the LCC amongst the wind and rain showers

I didn't attend which turned out to be a bad move as both A and B comps (plus coaching) flew and tasks were completed on the coast.

Best wishes to Crawford who threw his reserve near the St Bees cliffs and by all accounts was pretty fortunate in getting away with an ankle injury given the location and windstrength. Not good, but better than it could have been.

I believe he will be out of hospital today or Monday after an op. 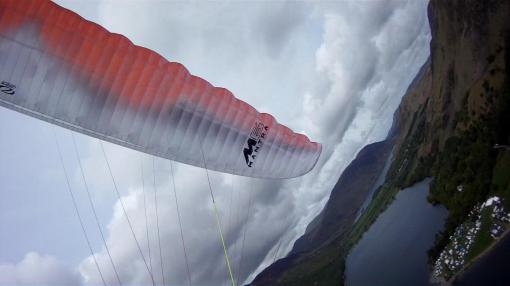 Arriving at goal near the LCC base

We didn't expect a lot and certainly the forecast, whilst suggesting a bright, dry day also put the winds at top end. Undeterred the A - comp went for Swinside and it paid off - the B comp were less fortunate and tried the coast again. It proved too strong there and they didn't get to fly.

Back to the A comp task on sunny Swinside.

Brian Doub, acting wind dummy took off and showed it was OK ..... it was certainly lifty. The Lorton valley seemed to be shielding the main hill and the decent sky and  sunny valley was triggering off an awful lot of lift. A 1000' without turning was there for some early takers - and even a few grand above take off, those clouds were really working.

We didn't have to walk very far up the hill and the take off's were easy in a light to occasionally moderate breeze - but it was damn steep ground wherever you elected to go from. DD was all for getting the task underway - convinced these decent conditions couldn't last. The course consisted of an elapsed time run via several turnpoints and back to a goal at the head of Buttermere under mighty Fleetwith Pike.

My own run was very easy really, I don't recall turning once and was always at  height - not cloudbase, but a single turn or two would have ensured that. Occasionally, the climbs got quite spicy so I backed off the bar, but generally were no problem - just strong surges as we a passed through the potential climbs. Later take off's didn't find it quite so good and more than a few got decked near Rannerdale Knotts. As easily as it gave - so it took away. I got a fast run, but then blew a crucial 42 seconds (Yep, I checked later) re orientating on the goal cylinder (and end of ESS) and I had to slide in from the side. Those seconds would cost me top place on the task I think, but what's a few seconds when you're having fun!  Goal was a delightful place - a lovely green field on the edge of the lake, sweeties and a few mates. It was even sunny and warm. I also got a river wade in bare feet to get back to base - God it was cold!

After a few beers, retrieving the car and more beers it clouded over and cooled down. It didn't dampen the evening though and the acro and every other silly activity went ahead in very rotory air. Tent landings, water landings and a few odd  happenings also spiced up the entertainment at times.

The LCC it seems can deliver even when the weather God's seem determined to spoil the party - as if!