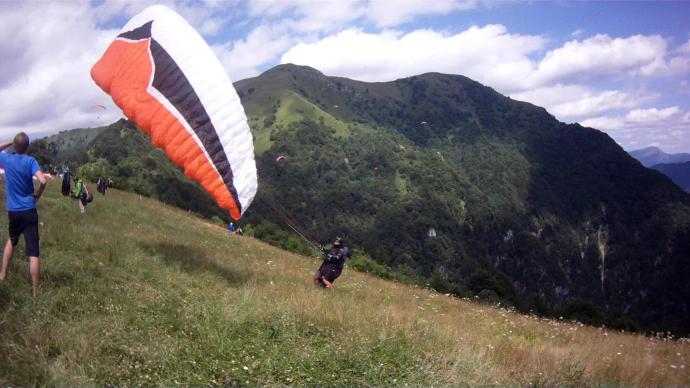 Launching an M6 on the east face of Kobala

This year, work meant I could only do either the Chabre or the GWO ….. as they ran back to back some did both, but I opted for the GWO. The attraction of the GWO is that during its short three year run it has changed venue’s and going to a new place is always more interesting than being fixed and whilst Laragne is good it’s getting a bit ‘same old’. This year the GWO was in Slovenia, based around Tolmin in the beautiful  Soca valley. This offers a number of in valley take off options but also Lijak, less than an hour away as the out of mountain option which is very reliable. I’ve flown the Soca valley before but can’t claim to know it well but I recall it being a stunning place to fly.

This year we had a slight team change – we lost the Carlisle crew,  but added Rod, James and Kev to our usual Brian, Tim and myself. David Brown was again there but had driven out with Jackie.This did result in a slightly quieter group, but less than expected as Rod proved a capable party animal  ……… however, with Tim in charge of logistics (transport and accommodation) things went very smoothly with good accommodation in Zatolmin and a cracking new minibus.

Before going I had concerns over the weather, but we only lost one day which resulted in a lovely gorge walk. Almost every day was hot, so ….  seven flying days out of eight ….. five  tasks ranging from 35k to 60k, plus practice day and we also again flew Lijak on the way back to Venice. All tasks except one used the Kobala  launch above Tolmin making use of the long Soca valley, with repeated runs back and forth until I guess we all knew it pretty well.  Conditions were good and occasionally strong, but never too taxing so many made goal and racing was the order of the day. If you lingered to take in the view or took a climb higher than necessary then you dropped places very quickly. A mere 10 minutes longer over the course could result in a drop of 15 places.  So ….. a need for speed and not especially my cup of tea but it was fun.

It may be worth mentioning for the faint hearted - or those who get carried away with the idea that it's a 'fun' comp. It is, BUT ....... the gaggles gathering before the start gate opened were pretty manic. It was busy and you need to be able to handle that! There were probably over 150 on the hill and at times flying was a bit insane given the numbers and relative inexperience of some pilots. All it took was the odd rogue to disturb the gaggles - either by aggressive thermalling or simply not looking or thinking. Fortunately there was only the odd wing touching amd a bit of shouting. Brett and Toby were on the ball with this and offered good firm advice and consistent monitoring by radio.

All the tasks, looking back are a bit of a blur (except Lijak). Most of use made goal, most days but could all point to the odd mistakes. Mine was monumental!  By the end of task three I think I was 18th overall …… and happy with that. Following a good, speedy run around task 4 I had been in goal 10 minutes and pleased I’d made some good decisions when someone mentioned trackers – my heart dropped through the floor. Somehow, I’d forgotten to collect it on launch and the result was a big fat ZERO!!!  What a completely dumb thing to do, so about 600 pts went down the pan and pushed me back to 61st.  To cap it all, Tim went one better the day after on task 5 and did the same thing despite being all too aware of my cock-up!

The final task was a bigger version of previous ones at 60k optimised and very memorable as it took in the back Krn ridge. Again we got most into goal and Rod, ever consistent did well and ended in 23rd place overall – a great achievement following on from his 2nd placing on task 3 at Lijak.  Lijak was the sort of task that suited us, conditions weakened and required a more subtle style of flying – in fact no one made goal. I had a fairly good run until the thermals stopped and could have scratched further into a pole position had I better understood my progress  – instead of flying out to the bottom landing field.

Worth mentioning is David Brown's admirable effort on task 5 ..... David had not always enjoyed the best of luck at previous events but aboard his new Iota (pronounced Yota - he insists) he stormed task 5, made goal and got a faster time than me on the M6. I'd kept watching him and thought I had him marked but he kept dashing off whilst I lingered for the top up. It paid off for David ...... fast, push on and expect the lift to be reliable - and it was.

So ended another GWO ….. the Chabre seemed to have good weather too,  but the GWO was really blessed with great conditions – if only it hadn’t been so damned hot!

Rubbish weather during the morning followed by a glorious afternoon so I went off to Wether Fell about 4pm. Had a boat around for an hour with odd thermals to 800' ato at best. 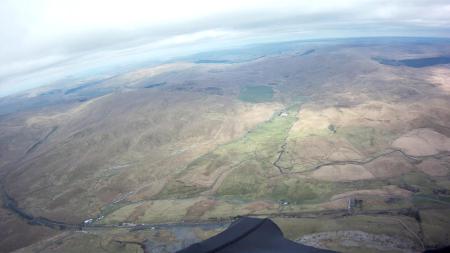 Wind, wind and more wind! After two weeks of essentially dry, but windy weather (jet stream still fixed through the mid part of the UK) it forecast Saturday to be a lovely day, but yet again too windy for flight.

Continued odd-jobbing during the morning until - I noticed it appeared less windy than forecast and the clouds looked too nice to ignore. Packed and drove up Chapel le Dale spotting a glider flying near the summit of Ingleborough, it actually seemed on the light side. To save time I walked up the north end to Park Fell - about 20 minutes to take off from the car. Again, at take off it seemed light if anything - still not complaining. Took off midway and scratched the first few beats until level with the top when the thermals kicked in. Enjoyed a good hour and a quarter and never quite sure whether it was off to the south or the north as it varied from Ingleborough to Park Fell. Several nice climbs and a few pushes out front under well formed streets. Wind only about 10mph at all levels.

Eventually, some bigger clouds with a lowering base and threat of showers encroached from the south so flew out and landed in a flat calm.  A while later a big hail shower arrived but soon passed.

Coffee and treacle cake with custard for afters ....... and I only went in the cafe for a cornish pasty!