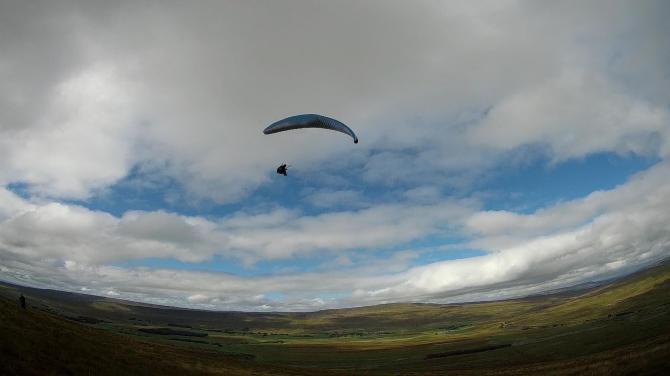 With the two Geoff's and Westie.

It was very light, we expected a N/NE given the forecast, but found a light NW. A short scratching session then we basically flew down. Geoff Yeadon (above) had the best flight making about a 100' over take off. Later the sun came out and although a lovely, late afternoon we were down by then,

It looked breezy on Wether and proved so as I stepped out of the car - blown out. I carried on to Dodd - all gates being open due to the cattle grids being fitted.

Take off on Dodd was only light to moderate, quite a contrast to Wether - the usual thing. Despite a forecast NW wind it was actually W so a bit off to the south. Took off and flew 3k north to end of ridge ... all that was required was getting back against the wind. Almost made it back just 40 yds short and wrong side of the wall. The 'others' turned up so I packed and we went to Penny Garth cafe.

As most then departed it left Westie, Chris Kay and myself for the final trip to Brantside. Spot on when we arrived; laid out the wings and at that very moment (uncanny) it switched 90 degrees to the north - and stayed that way. 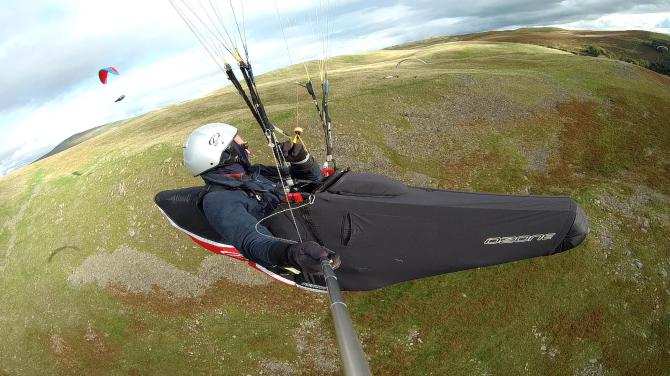 The winds finally relented and gave us a very enjoyable afternoon.

Session one:  I arrived to see several gliders airborne (Deano - Zeno) and (Rob Lund - King). They seemed to be doing well and Dean unsurpringly was high and heading out over the valley.  Conditions were good, but a slow moving shower cloud about 15k upwind was a cause for concern. The two Geoff's were concerned enough to see what it was going to do and waited it out. I thought it OK so took off - seven minutes in I had an underwear malfunction and was forced to top land and re-adjust. A second flight of 20 minutes before the shower seemed imminent and the wind picked up. Everyone packed up walked down and went to the Mousehole cafe in the village.

Session two:  Just after 3pm it looked nice - the sun was coming out and the winds had eased to pleasant. We all rushed up the hill and eventually  got airborne and had a really super time over 2 hrs until it dropped light and we decided to go to the pub. A single single pint dragged into several and it got rather late before we left.

A very pleasant and convivial afternoon and evening.