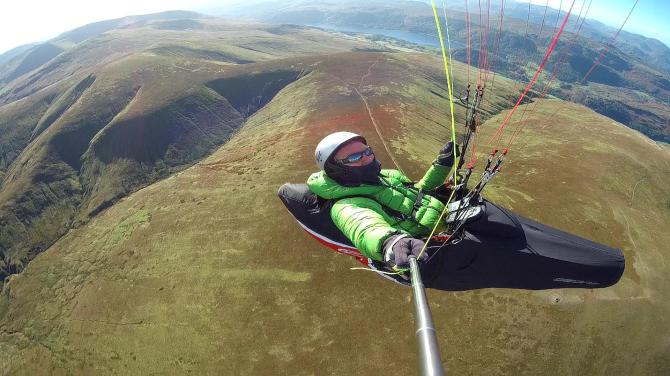 A great day with lots out.

I arrived with Westie to find a few in the air and others laid out maybe thinking the wind a bit too fresh. We set up and launched low on the east flank - it usually works well from low down. Enjoyed a 30 min flight before landing with Gary S to find it still ... a bit fresh on landing. 20 mins later it eased and from that point it was super, easy flying as the wind continued to ease and the thermals kicked in. From mid afternoon on it was fairly common to see people boating about at height and well away from the hill.

Landed about 4pm and went to the Threlkeld cafe for coffee and cake with Gary and Gill.

A nice but windless afternoon.

Met Dean and Rob Lund above the SW bowl, but all we got was a nil wind float to the bottom.

Went to the Hill Inn for a drink - but it was so good a pint and so convivial we stayed longer than planned.

As I walked up Park Fell I noticed a decent group of gliders (8 - 10) flying Simon Fell and doing OK. Arriving at the Park Fell take off the conditions seemed quite good - a soarable breeze and some sign of thermals. I had about four flights - never that long and each time landing as it seemed to get a bit scratchy. Finally, I managed to get  enough height and set off for the crossing to Simon Fell - 2k to the south. I arrived easily and joined up with the other wings but only recognised Chris Kay.

The lift was plentiful with some fair thermals that occasionally tempted me to follow them - the drift was good and it would have interesting to see how far they would take me. But - with such lovely flying it hard to leave it on a wild jaunt so i stayed put.  After a while I headed back to Park Fell - then returned to Simon's before going north again to Ribblehead and a landing above my car.

A really excellent day out.

Rather odd conditions - sunny, but a rather gusty northeasterly.

I walked halfway up to one of the grassy steps on the spur. Sometimes it was OK whilst occasionally it gusted through and swung either NW or NE. I was keen to get airtime on the GTO 2 so persevered. Just a short fly down in strong unpleasant conditions - not enough to tell much about the wing - except ... it doesn't do A/C launches and has flighty tips!