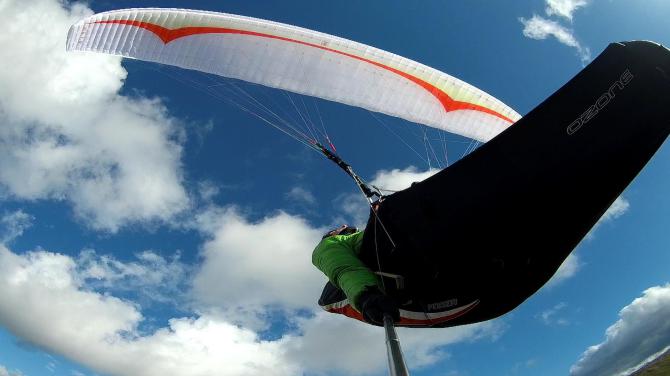 Arrived on take off at 10.50am to find it sunny, warm and with a very light breeze on the slope - but forecast to increase. By the time I was geared up it was almost soarable - five minutes and a message to the J36 group later and  it seemed OK so I took off for what would hopefully be the first real chance to try the GTO 2.

The first of several flights was lovely. smooth and bouyant with a decent thermal shortly after take off to 700'- a spell of exploring the site and wing and a top landing.  A few more flights with a little more bumpiness, a tadge more wind and signs of the other J36 pilots arriving.  Finally, Geoff Yeadon arrived on top as I came in to land on top ... the increase in wind now more evident.

By the time everyone had arrived the wind had risen beyond acceptable and it looked like a walk down. Twenty minutes of chewing the fat and it seemed to ease considerably with the passage of a big cloud. I took off again, but after a short while the increase in wind became more noticeable. I flew out into the valley  to find it quite gusty so decided to use the field landing as opposed to the fell behind the trees which can be turbulent under some conditions.

The others walked down and we departed to the Churchmouse for our usual coffee and toast.

The GTO2? A revelation .... not many around in the UK, but actually head to head a better glider than the M6. That really surprised me ... first time I've ever flown a GIN wing.

Now off to Scotland. 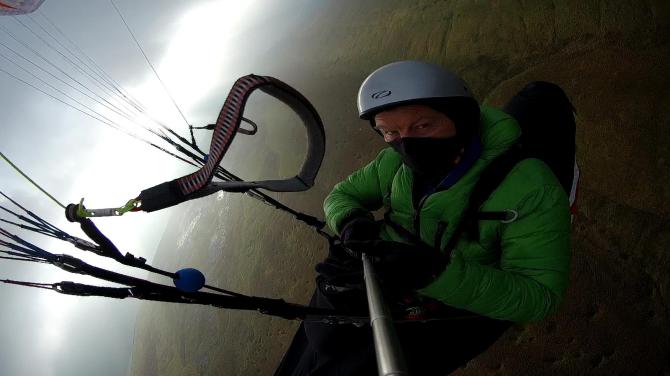 The mist was skirting with the top of Whernside as I drove past and headed for Semer Water. Semer was a bit top end so I turned and headed back. Despite the murk and low base there emerged from the gloom three gliders as I entered back into Chapel le Dale. so a walk up seemed worth it. Very little wind on the walk up.

I met the wind about half way up the steep, top slope so decided to go from there - not easy given the steepness and the rocks but second attempt and I was away to join Westie in the gloom.  Westie was time bagging but I was less inclined. There was a shallow slot to play in before disappearing into the white ... and a long way out it was too. So lifty .... right from the very lower slopes.

We landed played and chatted to an old guy and then wended or way back as the sun played around Chapel le Dale ... but the hill stayed resolutely in the murk. 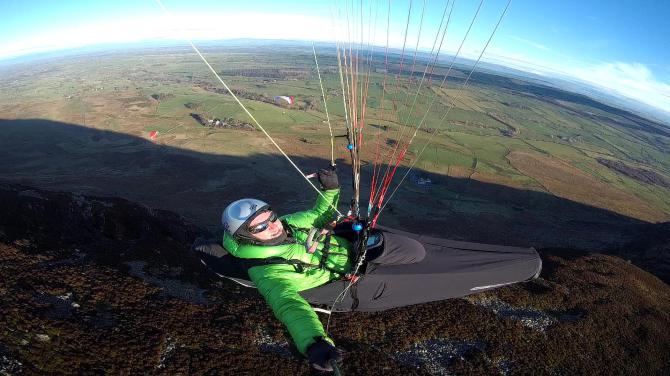 Westie, Ian F and I drove up to Carrock ... it was forecast to be light - and it was. Blue skies and a lovely day on the tops and if fellwalking is your thing then the perfect day for it - the Lakes was stunning.

We all (about 10 of us) walked up by various routes to  converge on the summit and laid out. It was still very light and mostly pretty windless but with a hint of south. All got off - some finding it easier than others - the benefits of a light wing makes it easier. A nice float down with never a hint of up and we landed in a light katabatic at the bottom.

Coffee and cakes at Rheged for five of us and then headed back south and home.