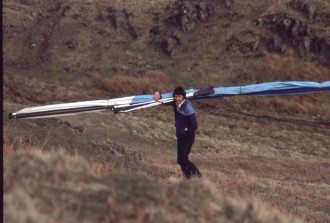 Link to just a small sample of the slides and prints that I've got round to scanning. Yep - pre digital age!

I got my then, EPC at Top Flite (Roger Middleton's HG school near Troutbeck, Keswick), TF lasted about another year before the high turnover of uprights forced him out of business!.  My course (£85)  was over Easter 1979, four superb days of weather - that's how good it was then, even after the glorious summers of the mid 70's.  I then - lapsed and continued climbing until V M Airacksinen, the flying Finn dragged my out again in the summer of 82' This photo was taken late in 1982 after getting rid of the Spirit (triple deflexors - wow!) and getting a Super Scorpion. The SS and going prone from seated at such an early stage was greeted with a shake of heads by the older hands. A year later it was on to the first of the 5th Generation gliders, a double surface Demon, to be shortly followed by a Lightning. I think to some it confirmed I was either a man in a rush or completely mad. 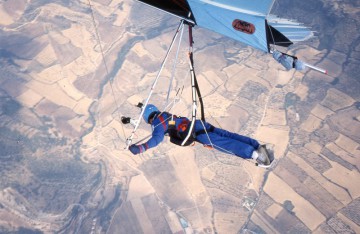 My first foreign flying trip was to Ager in 1884. Ager was pretty unknown to most UK pilots them, but had just been publised by Alan Russell's, 'The Ager Tapes'. In those days a pretty long overland trip with all our gliders and kit (four of us went - even the local paper made a thing of it in those days).

The above photo was taken at about 12,000' over the centre of the valley - it seemed a good height gain at the time.

Several highlights. The first was getting hopelessly lost in the maze of a Spanish town in the middle of the night in search of a, 'Jesus' who could make spare rigging wires - eventually I was passed down an escape line to a darkened house in the middle of town. Got the wires made however and didn't have to pick straws to see who would fly/drive over the following days.

Oh ........... I also came home (remember no mobile phones/internet in those days) to discover I was a father for the first time. From that point on I was never allowed to accuse my son (Ian) of being late!